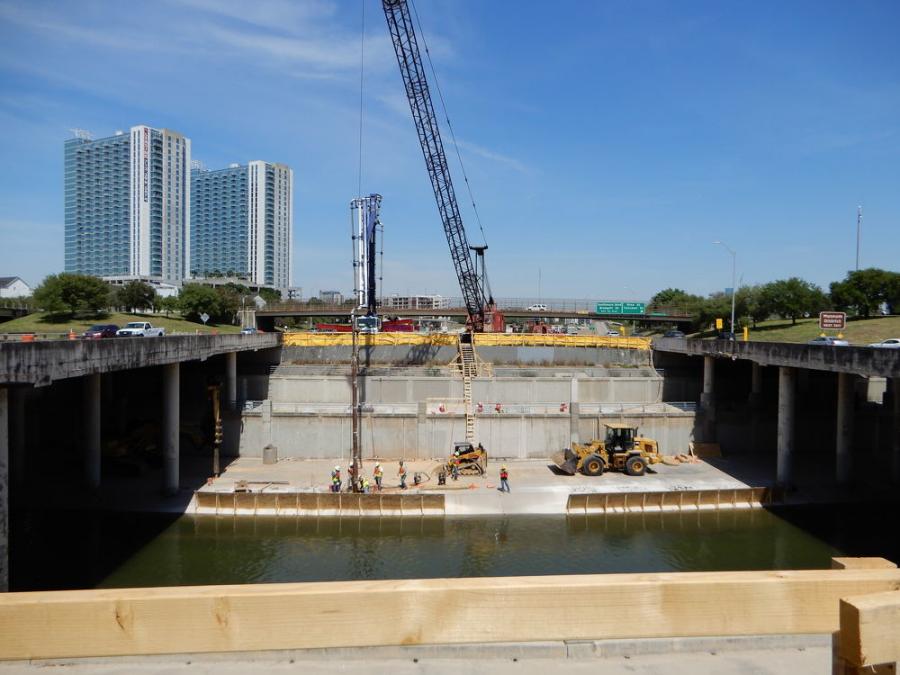 Almeda-Genoa Constructors, a joint venture of Dragados USA, Pulice Construction and Shikun & Binui America, is the lead contractor on the Drive 288 Project, which will rebuild portions of SH 288 in Houston.

Having started work on the $815 million, 10.3-mi. SH 288 Toll Lanes Expansion Project (Drive288) in Houston — an initiative of the Blueridge Transportation Group (BTG) the developer, in partnership with the Texas Department of Transportation (TxDOT) and their joint- venture partners, Almeda-Genoa Constructors (AGC) — construction crews are eyeing the end of this year for the completion of the massive undertaking.

AGC is a fully integrated joint venture between Dragados USA, Pulice Construction and Shikun & Binui America, known collectively as DBJV that was put together specifically for this project. The lead design engineering firm of the design/build project is Stantec.

This is a P3 project, the first of its kind in the Texas area. The SH 288 Express Toll runs from downtown Houston to southern Brazoria County.

"It is providing a vital route for commuters, as well as freight and commercial trucking," said Raynese Edwards, project manager of the Blueridge Transportation Group LLC. "Moreover, it also serves as a hurricane emergency evacuation route. The SH 288 Express Toll Lanes Project will help accommodate additional traffic, improve access to the Texas Medical Center and downtown Houston for commuters traveling from the southern portion of the roadway and enhance the operational efficiency of SH 288."

The work led to the construction of tolled lanes, two in each direction within the existing SH 288 median, from U.S.-59/69 to the Harris/Brazoria County line, the construction of new bridges and new ramps and exits, various types of underground infrastructure, new led lighting as well as drainage being added.

"One of the challenges faced while constructing the eight replacement direct connectors was to keep traffic open and moving while building the connectors," said Enrique Martin, CEO of Blueridge Transportation Group. "We managed to design temporary ramps and connectors to keep the traffic moving while building new ones in the same location only at an higher elevation than what was there originally. BTG is responsible for maintaining the toll lanes and the GPL for the next 40 plus years. From an environmental perspective, we worked closely with the Army Corp of Engineers for some of the wetlands work."

But it was more than just building new infrastructure. The four lane toll roads were built in the median of the existing general purpose lanes of an urban community. Constant communication regarding construction was critical to share with the surrounding communities.

The remaining work for the project is focusing on the clean-up work, replacement and a punch list of items required for completion, including landscaping.

"Unfortunately, our challenges have to do primarily with weather and suppliers," said Edwards. "This past year has been very challenging as it relates to deliveries. However, the one thing that was consistent during COVID 19 was that construction in the city of Houston continued. This project was completed by day and night shifts. We were not allowed to close the general purpose lanes during the day, so work that needed to be completed was done in the evening from 9 p.m. to 5 a.m. During the day, from 9 a.m. to 3 p.m., we closed service roads and some city streets. We have done well over 5,000 lane closures for this project."

The construction of the new lanes — on the ground and for elevated portions — involved the use of many cranes that worked in tandem to lift beams and prefabricated concrete element; manlifts; excavators, including Daewoo models; loaders, such as Mack models; various rollers and pavers. 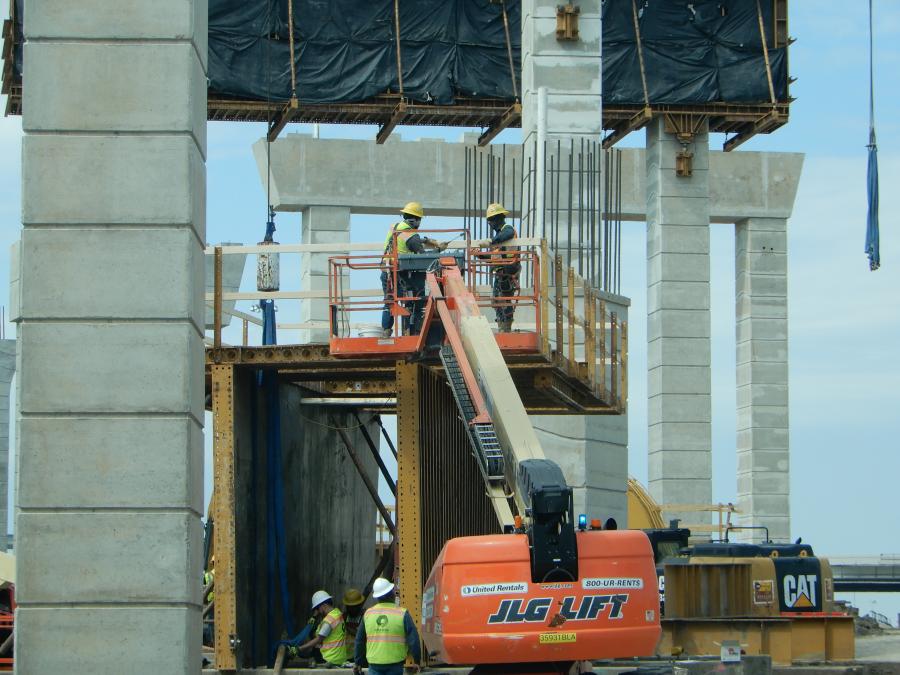 In more urban areas, space was tight, but for many areas, crews had ample room to bring in materials and equipment and establish layout yards.

The constructions of the lanes in the median area was the equivalent of four lanes, which allowed multiple crews to work unimpeded and proceed from stage-to-stage. Asphalt and concrete could easily be poured and dealt with by crews.

The excavation work for the new stretches of road had excavators and motor graders preparing the ground, with loaders nearby to be filled. Prior to placing the subbase, base and asphalt topping, large sections of the areas for the new lanes were prepped.

Some of the excavated material was re-used on-site. Material to be recycled or moved off-site was stockpiled.

The planning for the road work was meticulous, which maximized crew time and timed the delivery of materials with operations. Crews were able to work on both sides of the new lanes simultaneously.

The project was divided into six segments, according to Edwards.

"While the constructor was AGC," said Edwards, "the maintenance and operations for the next 40-plus years is the responsibility of BTG. They are not just responsible for the toll lanes, the responsibility is from right of way to right of way, which includes the general purpose lanes and the service roads. Additionally, there were federal dollars associated with the project and DBE goals were established and surpassed for the utilization of subcontractors.

"We also had to coordinate with HCTRA [Harris County Toll Road Authority] at the Beltway to build the direct connectors," she added. "Other coordination was with Brazoria County as the toll road continues another five miles from Clear Creek, where the Harris County portion ends. However, Brazoria County is responsible for that section, we just tied into theirs and vice versa."

Some of the preliminary work on the project included building a new Southmore Bridge, which was 200-ft. long, two lanes each direction with dedicated turn lanes, landscaping and a pedestrian bridge on each side. That was completed between 2018 and 2021.

"The bridge was demolished over a weekend beginning on a Friday evening and completed on a Sunday afternoon," said Edwards. "The work was done by saw cutting and the removal of debris. It was timed with numerous trucks on-site for removal. Major challenges, again, dealt with weather. Specifically hurricane season and rain. These two issues caused some delays. Additionally, there were delays with getting the fabricated structures due to COVID19."

"The steel structures had to be fabricated and delivered to the site," said Edwards. "The bridge is concrete with steel beams. There were challenges with getting the structures completed and delivered during COVID19. The plan of attack was to demolish the majority of the bridge overnight so that Saturday and Sunday would be dedicated to removal and cleaning so that the general purpose lanes would be ready for Monday morning commuter traffic."

Cranes — various types and models— were essential for the work on the bridges, including the Southmore Bridge and those that spanned canals and wetlands. Bridge crews, for most situations, had sufficient space to store materials and maneuver freely, which accelerated the operations.

The underground infrastructure work went according to plan.

"The work was done both ahead of some roadway work and some was done alongside of the work," said Edwards.

"[The constructors] worked with BTG as a cohesive team, with weekly meetings to discuss upcoming work and progress," said Edwards.

"Obvious wear and tear occurred throughout the work, especially to tires," said Edwards. "The key to maintenance on a long-term project like this is to make sure that you have developed relationships so that when a need arises, your maintenance company can come quickly. We did establish a yard where equipment and maintenance supplies were kept along with the construction office. The JV established relationships based on AGC and not the other companies that were a part of the JV. We had people in place almost a year prior to actual construction."

In the Houston area, the JV partners purchased and rented equipment from a number of local and non-local companies.

"Our subcontractors also utilized their own equipment that was either owned or rented," said Edwards. "Relationships with the dealerships were key."