Gottesman spoke of the early days when she left her work as a critical care nurse to launch her own metal and marble restoration business. 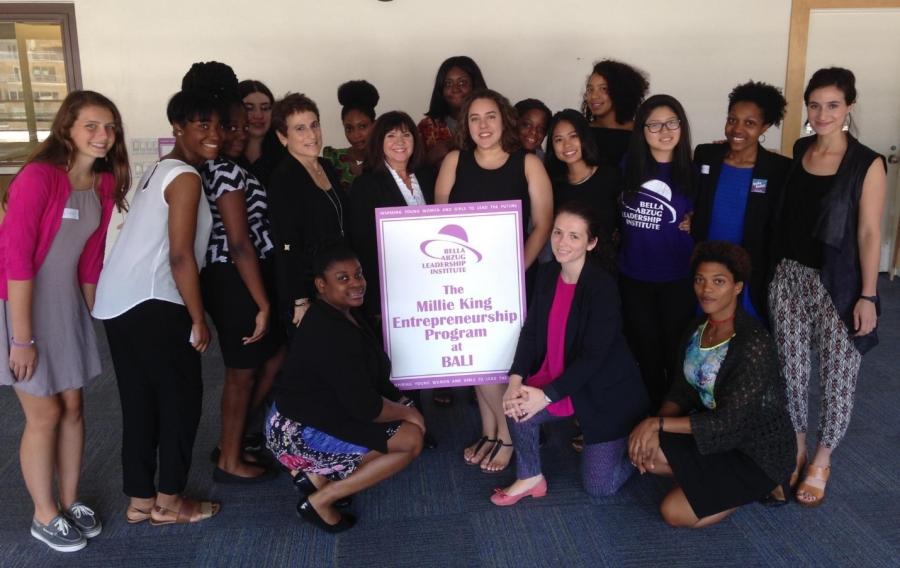 On Wednesday, August 3, Lina Gottesman, president and CEO of Altus Metal, Marble and Wood, spoke to a group of approximately 30 young women trainees, mostly high school graduates entering college in the fall and college freshmen and sophomores, at the launch of the annual Millie King Entrepreneurship Program presented by the Bella Abzug Leadership Institute (BALI) at Hunter College in New York City.

Liz Abzug, BALI's founder and executive director and daughter of Congresswoman Bella Abzug, an activist and women's leader best known for her forthright style and signature hats, invited Gottesman to speak because, said Abzug, “Lina runs two businesses, she's dynamic, she has wisdom and I knew she would inspire the young women.” [In 2013, Gottesman started a second business, RN Nurses Evolve.]

BALI Program Developer Meghan Maloney explained, “The goal is to inspire young women to become entrepreneurial leaders in their communities.”

Gottesman spoke of the early days when she left her work as a critical care nurse to launch her own metal and marble restoration business. Growing up in a family that ran a stone and masonry company gave her the courage to enter a male-dominated field. She founded Altus Metal and Marble Maintenance – now Altus Metal, Marble and Wood, in 1989, naming it for the Greek symbol for excellence.

“A plan coupled with desire picks up speed,” advised Gottesman, pointing out the necessity of developing a business plan. She added: be honest; treat clients with respect; and provide the highest quality workmanship.

She told the girls, “Always believe in yourself – and don't let anyone tell you that you can't do it.”

Afiya Letford, a student enrolled in the two-day workshop said, “Hearing her helped me understand a female perspective.”

Student Monika Luchowska said, “She gave real advice on how to be confident and assertive. It's [important] in a competitive business world.”

High school senior Jasmine Tang said, “You need support, you need to know where and how to get the money, and you need an intricate business plan.”

Student Esther Borteye said, “The speakers … inspired me as a woman to think 'I can do it.'”

Gottesman has been honored by The Long Island Center for Business and Professional Women (LICBPW), the Regional Alliance for Small Contractors and the Port Authority at the Competitive Edge Conference. She has mentored inner-city girls through the Girls Trendsetters Program of Pace University; and serves on the boards of the LICBPW, the New York Women's Chamber of Commerce, the New York Women's Agenda and Local 8a28a Metal Polishers Union, and is an active member of BOMA (Building Owners and Managers Association) and the Women's Presidents' Organization.