AMEC Construction currently is involved in a massive demolition and recycling project at the 60-acre site of the old General Motors plant along the banks of the Hudson River in Tarrytown, N.Y. 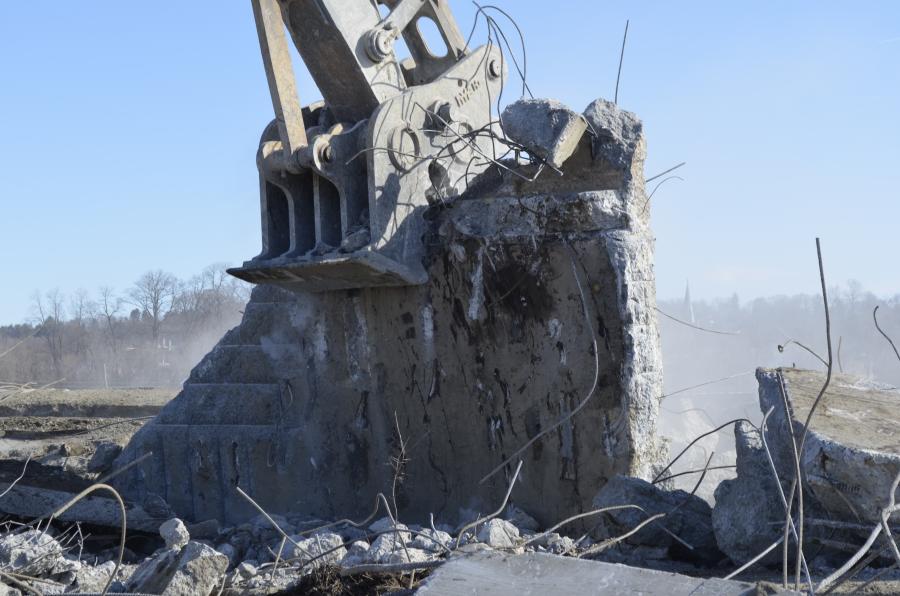 The NYE pulverizer lifts a chunk of concrete weighing several tons into position, with the help of a John Deere 670G LC.

AMEC Construction, headquartered in Norwalk, Conn., is a dynamic, fast growing firm. From its beginnings in the recycling business, it has grown into a major player in the New York City Metropolitan area and Connecticut, with divisions that include excavation, C&D recycling centers, containers and roll-off services, demolition, on site recycling and aggregate production.

Owner Guy Mazzola is working to carry on the values of the company that were established by him and his father, Guido Mazzola, since the company's inception in 2000. The company is currently undergoing a strong growth cycle and is performing increasingly larger projects each year.

AMEC Construction currently is involved in a massive demolition and recycling project at the 60-acre site of the old General Motors plant along the banks of the Hudson River in Tarrytown, N.Y., just a few blocks from the construction of the new Tappan Zee Bridge.

Two large manufacturing buildings and various support buildings already had been demolished. The current proposal for the development of this parcel includes a mixed-use waterfront project with residential units, retail and office space, and the possible construction of a hotel. Once the demolished buildings have been processed and recycled, Phase II of the project will begin, which will include the construction of roads and parking lots, and the installation of utilities.

One of the biggest challenges of this project is the massive size of the concrete foundations, footings and piers that needs to be processed. Many of the concrete chunks are as big as 12- to 15-sq. ft. (1 to 1.4 sq m), completely reinforced with rebar, and set 8 to 9 ft. (2.4 to 2.7 m) deep in muck.

According to Stephen Scherrer, logistics manager, "One of the first steps was to purchase an excavator that could handle maneuvering materials of this size. To accommodate this need, AMEC Construction purchased a John Deere 670G LC — a 154,000-pound excavator."

National Attachments has been working with NYE for the past 25 years to supply U.S. demolition contractors with one of the strongest, most durable mechanical concrete processing tools available anywhere, according to the company.

"Working with National Attachments has been great," Scherrer said. "They worked with us seamlessly throughout the entire process and we found them to be a wealth of knowledge. Gabe recommended that we equip the processor with an optional ripper shank, which we have found to be very useful in assisting us in moving and positioning these massive concrete boulders.

"The NYE concrete pulverizer has been used for the last two months and it has been an absolute animal. It is overbuilt and has held up well under extremely punishing conditions and was easy to install."

AMEC Construction's production levels using the John Deere 670G excavator with the NYE pulverizer have exceeded its expectations. As the NYE pulverizer downsizes the concrete, a pile of rubble is created that is a mix of concrete and rebar. AMEC Construction doesn't want the steel rebar to end up in the crushing spread and it has value as scrap steel, but to manually sort through the rubble and separate out the rebar would be a labor intensive and time consuming process. National Attachments worked with AMEC Construction to match up a magnet with an excavator to make this process easier.

"Gabe located a Moley hydraulic self-contained magnet with claw teeth on its front and rear. The teeth allow us to rake the magnet across piles of rubble moving the concrete away and lifting out the rebar. This system has exactly met our needs," Scherrer said.

AMEC Construction's equipment fleet is in excess of 100 machines, made up primarily of John Deere pieces, which were purchased from The W.I. Clark Company, and an extensive portable tracked crushing and screening spread purchased from Northeast Equipment and manufactured primarily by Sandvik.