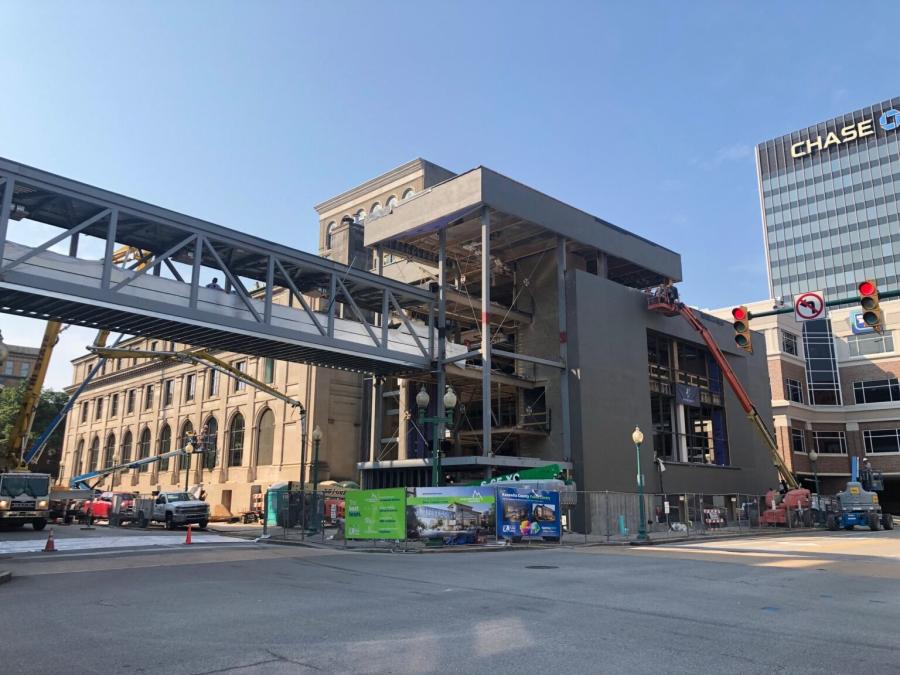 The pedestrian bridge allows visitors and employees to cross between the library and the Summer Street Parking Garage. (Jake Flatley photo)

The construction of a Sky Bridge to connect the new downtown Charleston, W.V., library to a parking deck neared completion May 26 when concrete was poured on the span.

Following that, five Kanawha County Public Library (KCPL) employees, each of whom have served there for 35 years or longer, put their handprints in the concrete to commemorate the event.

The pedestrian bridge allows visitors and employees to cross between the library and the Summer Street Parking Garage.

Elizabeth Fraser, head of KCPL Reference Services department, was one of the five to leave behind their handprints.

"We have worked and planned for a new library for the public for a long time," she said to MetroNews. "To see it come to fruition, it's really cool. You work really hard and to see something tangible is icing on the cake."

The Sky Bridge is a part of the $32 million renovation of KCPL's iconic downtown library building. In addition to the span, the project is designed to add 28,000 sq. ft. of new space to the original building, expanding it from 53,000 to 81,000 sq. ft. in total. The new space will accommodate more community rooms, new technology, an expanded children's floor, a café, and other features, according to a library press release.

Fraser told MetroNews that she was excited about the library's possibilities.

"In the children's department, [we're] going to have dedicated program rooms," she noted. "You can do messy crafts and things you couldn't do before. In the reference department, we're going to be able to build a neat West Virginia room [that] we'll be able to [also] digitize to share with the public."

The library project remains on schedule to be completed in December 2021. The final beams for the project were put into place last November.

In June 2020, KCPL officials opened a branch location in the Charleston Town Center while the downtown building was closed during the construction. The mall's library location became even more vital as the pandemic was still in its early stages.

"During the pandemic, we did curbside service," Fraser explained. "We did reference and got people signed up for library cards so they could use e-books and audiobooks during the lockdown."

According to MetroNews, she said COVID-19 showcased the diverse ways a library can serve a community and believes the new downtown KCPL will see a marked uptick in foot traffic once it opens at the end of the year.