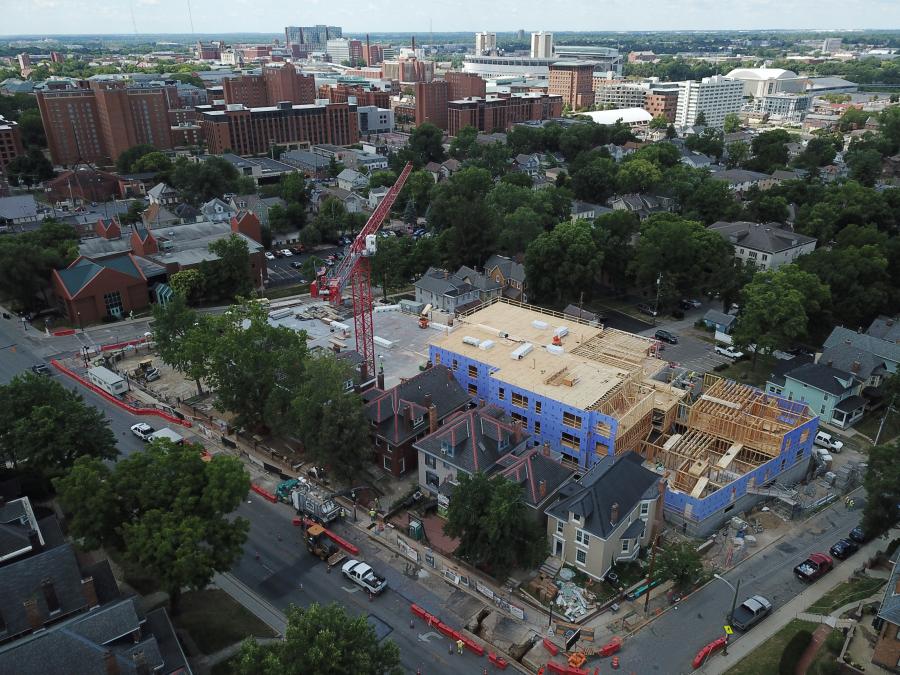 With the skyline of Columbus in the background, a tower crane looms over the construction site of The View on Pavey Square.

Sometimes, digging a foundation proceeds without any challenges whatsoever, but there are times when workers not only have to deal with a tight site in a downtown area, but also are confronted with a high water table.

This is the case for Welty Building Company Ltd., the construction management company putting up The View on Pavey Square in downtown Columbus, Ohio, a $27 million mixed-use student housing development located on the city's iconic High Street.

The 183,000-sq.-ft. project features six historic homes along Pavey Square, and a main structure behind them in a lot that will contain a two-story concrete podium in the basement and main floor with four floors of residential wood structure. There will be 132 apartments and 6,587 sq. ft. of retail and office space, including a restaurant.

While there will be some underground parking spots accessible via an entrance, the bulk of the parking is based on an automated stack parking system, which had been used in two previous View projects.

The podium section also contains some mechanical rooms and administrative offices, but the footprint of the building is approximately 35,000 sq. ft.

Work started on development — the renovation of the six homes is being handled by another contractor — in October 2017 and it will be completed either on April 30 or May 30.

This is the fourth View project for the developer, JSDI.

The View, designed as a luxury student apartment building, is minutes away from the Ohio State University campus, libraries and sports venues, as well as being close to downtown shopping and entertainment.

BBCO Design, a local architectural firm, designed the complex, which blends the past with modern architecture to create a "neighborhood style" living environment.

Amenities will include a rooftop decks with lounge seating, grills, TV and sun deck; a conference room and group study space on every floor; a kitchen area with vending machines; a courtyard with gas fire pit, grills, and lounge seating; a 24/7 fitness center; and safe bicycle storage.

The furnished units will have three or four bedrooms, high-speed Internet and USB outlets, a washer and dryer, central air conditioning, elegant and European-style interior features and modern lighting.

Welty secured the contract in August 2017.

"We bid the job, won it, and were pleased to sign the contract" said Dave Kellner, Welty's project manager. "However, as with all projects, there were certain challenges to overcome."

Kellner and the firm's subcontractors are meeting those challenges with determination, alternative building methods, flexibility, and cooperation. 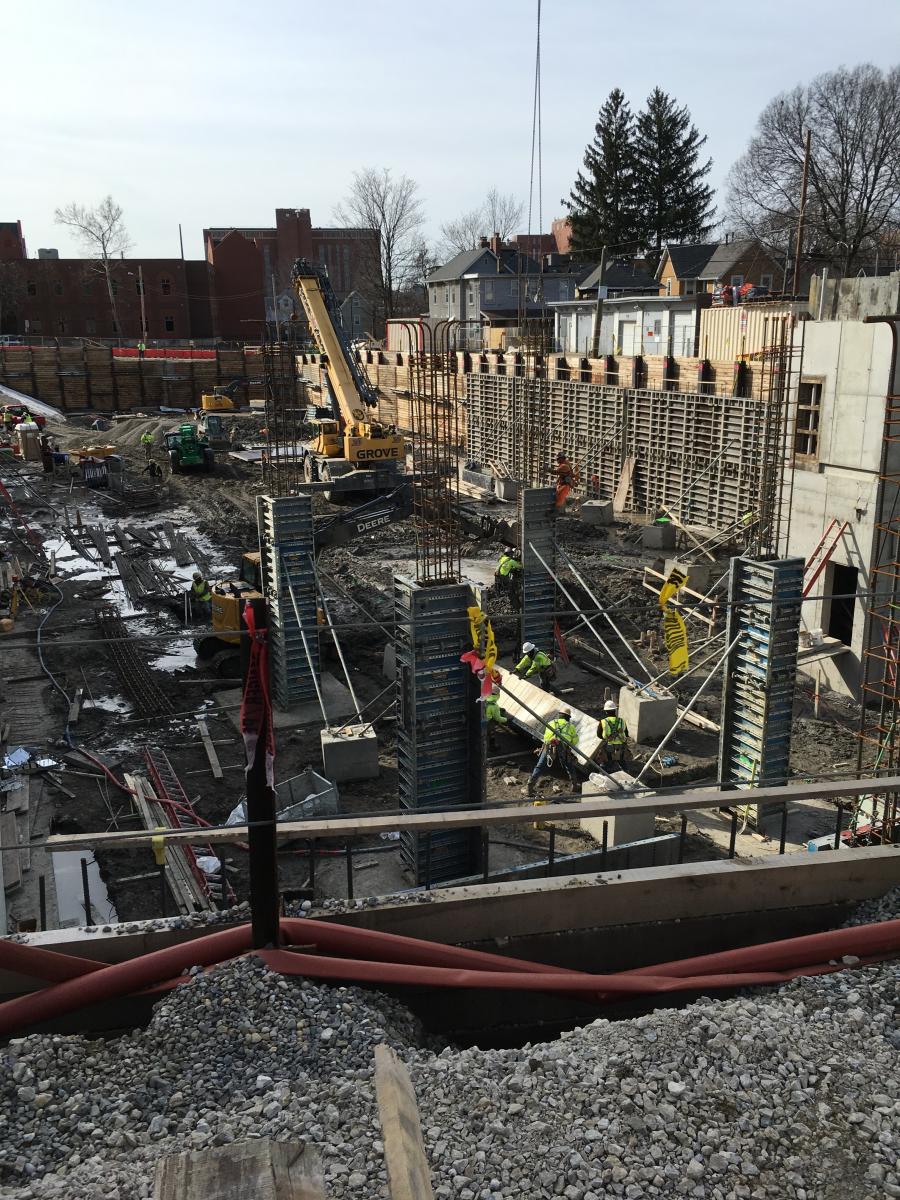 "When I say this building is shoehorned, it is wedged in behind the Pavey family houses," he said. "One house is where Dr. Pavey had his office, these homes are dear to the family's hearts."

The homes, which are undergoing renovations, have had their power shut off, and the temporary power required for the new construction is being supplied by a panel. The site contained a small structure, which has since been demolished, and some trees.

"We placed shoring to hold the earth back and protect the foundations of the houses, and we never used jackhammers for demolition — most of the soil was easy to dig in and get out of there," said Kellner. "It was kind of close at points, where it was tiny and tight space to get there, but there was little vibrations in order not to cause damage. At any one time we have at least three places where workers can come in.

"During the digging of the foundation we had one ramp, 25 to 30 feet in height, in the southeast corner, and the challenge was that you were bringing heavy equipment in and out at a time when we had heavy fall and spring rains," he added, "and the ramp tended to get shoved and broken apart, so continual maintenance was critical.

"In addition to the access issue, we discovered the depth of the water table, so the north side [the lowest area of the building] is continually being infiltrated with water," Kellner continued. "We had to quickly design and construct a sump to literally keep our feet above water."

The foundation is approximately 320 ft. long, 75 ft. wide, and 30 ft. deep. When the digging was completed in late December and early January, thousands of tons of earth and rock were removed.

An additional challenge was an electric power line, with poles along an adjacent alleyway within feet of the foundation being dug.

"We worked with the local utility to relocate the line during the construction, and there was little delay in the removal," Kellner said. "We could dig the majority of the hole, but could not encroach upon the lines until they were removed. The rest of the other utilities — gas and others are in the alleyway, but are buried and with the shoring we provided, we did not come close to them."

The demolition of the small onsite structure was done quickly, but first it required asbestos abatement measures.

With the majority of hole dug and shoring being secured, placing of concrete began in the winter, which was not ideal.

"These challenges affected scheduling and provided the need for operational capability and timing options. For example, we'll need to place Exterior Insulation and Finish System (EIFS) and brick in cold weather too," said Kellner, "but we planned on some cold weather operations. We are trying to put on a roof and it's either raining or cold every day – we cannot put a full adhesive application down thus we've received concurrence to go to a mechanical application."

The earth work and shoring were completed by George J. Igel & Co. Inc.

The podium has post-tension (PT) decks structure, based on a 9-in. slab with PT cable running throughout.

"Once you place the concrete and it cures to the right strength — in this case it had to be at least 3,000 psi to begin post-tensioning operations — you would pull tension on the cables that were laid prior to the concrete and lock or collar them off," Kellner said. "That portion of the work was critical because if one of those cables lets go, you're going to have a mess." 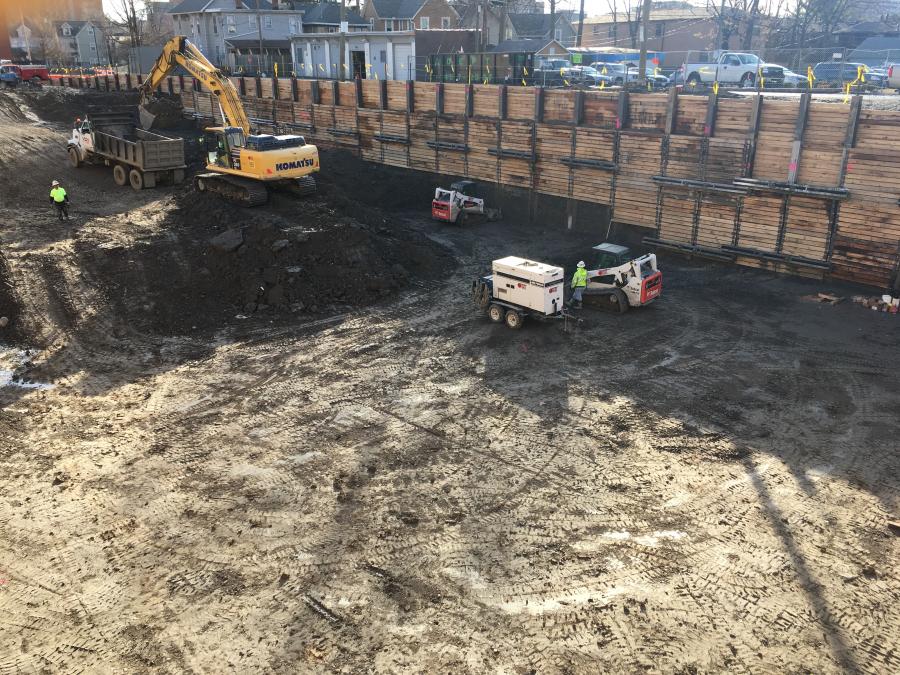 The podium was completed in mid- to late July, and the top portion of the residential element was divided into three parts — A and B for mainly residential and C for apartments above a restaurant. The wood-framing crews, which had to place a gypsum board face with an exterior insulation and finish system façade, started as quickly as possible.

"We have four floors of wood, using shearwall construction," said Kellner. "It's probably one of the taller wood buildings that is going up around us. The amount of wood that was required for the lower floors and the shearwall gives you the amount of structural support that was needed.

"In addition, we ran with a CLP system or tie-down system from the roof down to plates to hold the wood structure together to the concrete deck – to brace it down so that it ties right into the deck of the podium."

Instead of traditional balconies, Juliet balconies are being placed that extend about 9 in. from the sliding doors.

The building is up, and the roof is going on now despite the frequent rains and cold temperatures ruling out using certain glue for this aspect. Instead, a mechanical solution is being employed.

"We should have no problem working through the winter," said Kellner. "It just requires tenting and warming of the materials in the space. It just goes a little bit slower. Once the roof gets on, the city inspectors will allow us to run wire and ductwork inside. Right now, all pipe and duct is run vertically so that if any water gets into the building, it will just run through,"

Work on the roof began in early December and is expected to take three weeks to complete.

"But we can start inside as we complete sections of the roof," said Kellner. "The windows are also going in at the same time and with that we can start putting heaters in spaces to provide indirect heat, which is better than blowing hot air everywhere. This also means we can put the de-humidifiers in there to start drawing out the moisture from the wood."

Kellner left nothing to chance, and knowing that moisture might be a problem, he ordered high-grade oriented strand board, which impregnated with a water inhibitor compound to make it moisture-resistant.

"We got lucky in that regard by taking advantage of new technology," he said.

One area of construction that is critical to meeting the completion date is the installation of the mechanical parking system.

"The fabricator is out of country," said Kellner. "The city of Columbus has a stipulation that we can't have beneficial occupancy of the facility unless we have sufficient parking for the residents of the building."

The parking system, in some places, is three vehicles deep and two vehicles high. A traditional garage would have required additional space but that was in short supply here, particularly as going any deeper would breach the water table more.

The companies participating in this project are Eagle Concrete for concrete and site work, George Igel for civil and shoring, Titan Electric for electrical requirements, Freeland Plumbing for plumbing, Shaw Mechanical for HVAC, Fire Guard for fire sprinkler and suppression requirements, Marquee Development for drywall, Aztec Steel for metal stairs, railings, Juliette's and embed plates, Graves Lumber for framing, and 84 Lumber for doors, frames and hardware, 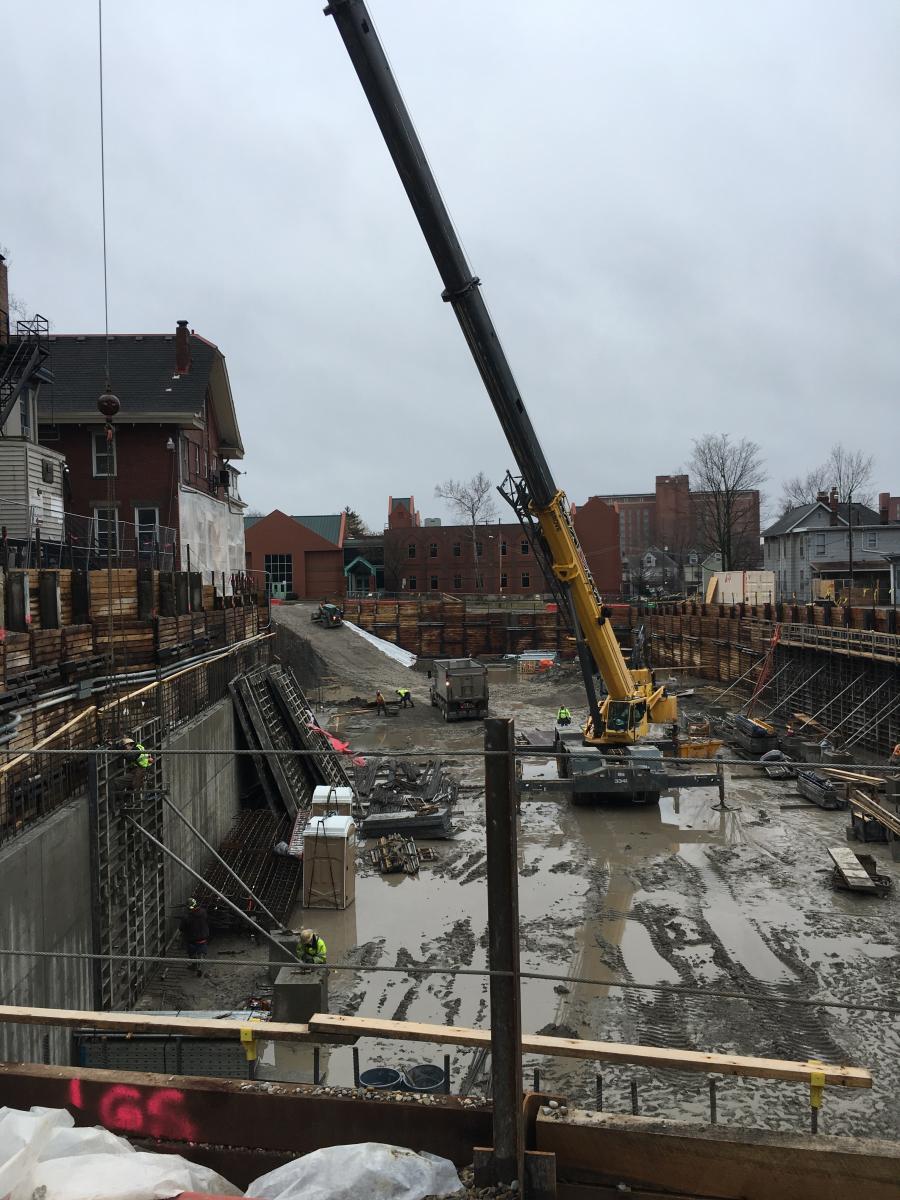 A 103-ft. tower crane was rented from All Crane & Rental in Cleveland and erected for this application due to the close nature and long pick distances.

"Without it, we could never have accomplished half of the things that we've done so far," Kellner said. "The crane was placed on the east side — between the building and two houses, where there was a large gap that is going to be used to enter the building. We had to move it in the middle of October because we had to backfill that area where some utilities had to go."

An RT 65 crane has since been brought on site from D-Crane to help move wood and other materials, and an elevator or buck hoist will be installed on the west to bring up items such as sheet rock, flooring and cabinets.

Throughout the project, and more so recently, Kellner has used LEAN construction methods with contractors, securing sufficient personnel to complete the remaining elements on schedule.

"This allows us to de-conflict the subcontractors as they move throughout the building," Kellner said, "and that allows us to compress the schedule a little to do more concurrent work. Welty utilizes a drone that flies over the work site so that we can get the comprehensive picture, and when we have our morning huddle with the foremen, the Superintendents can tell the subs ‘you're going to enter here, you're going to move there, and we can push or pull the daily schedule in this case over a three week look ahead.'"

"They're the three that make everything go," said Kellner. "My role has been more related to making the finances and paperwork flow; and coordinating with the owner's representatives and the architect to make sure that the submittals, RFIs, and everything else flows at a decent capacity."