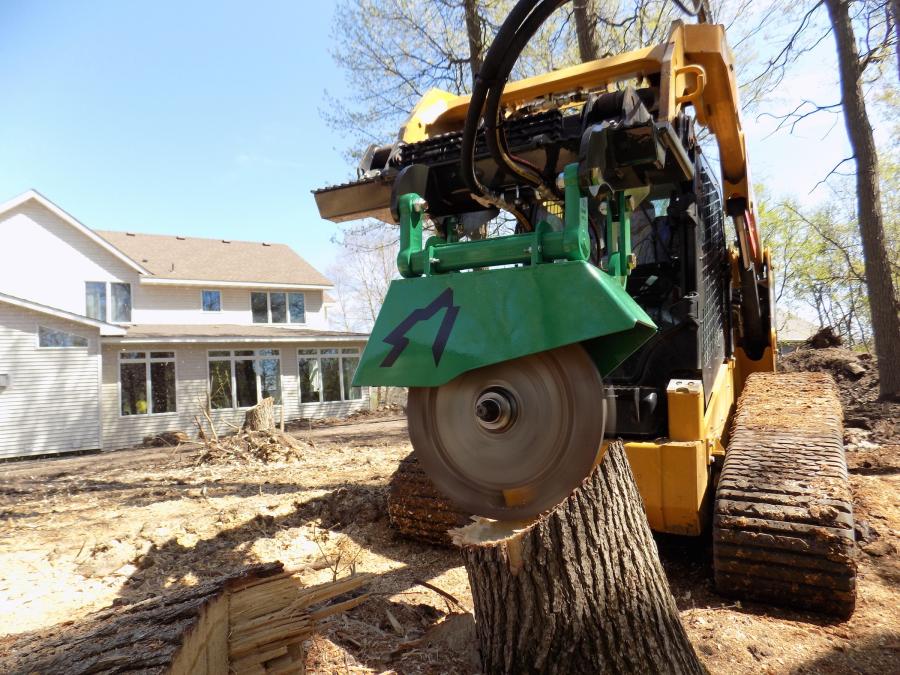 The UltraGrinder by ArborWolf, Burnsville, Minn., has a radial piston motor for maximum productivity, a cushioned parallelogram mechanism for drivetrain protection and teeth on both sides of the cutting wheel to allow for dual-direction cutting. It also features Greenteeth technology as standard equipment.

The UltraGrinder delivers the productivity of a dedicated stump grinder but at around one-fourth of the initial cost, according to the manufacturer. It is currently available for low- and high-flow skid steers from 16 to 45 gal. per minute (GPM), and versions for mini-skid steers and mini-excavators will be available soon.

ArborWolf President and Product Development Manager Jerry Holman said that, compared to other stump grinder attachments, the UltraGrinder is as much as 150 percent more efficient.

“This the most productive attachment-style stump grinder in the industry,” Holman said. “Our design makes it incredibly efficient while keeping it as simple as possible.”

ArborWolf created the UltraGrinder for a range of users, including professional tree and tree-maintenance contractors and companies, landscapers, farmers, ranchers and landowners. The UltraGrinder's simple connection and operation also make it ideal for the rental industry.

The UltraGrinder performs all the functions of other stump grinder attachments without any auxiliary or electrical controls, harnesses or circuits for raising and lowering, swinging or telescoping. Due to the way the UltraGrinder operates, those functions are not needed.

“If you can run a skid steer, you can efficiently and safely grind with an UltraGrinder,” Holman said. “All you need to do is plug in three hoses and go cut wood.”

At the center of the UltraGrinder's efficiency, productivity and safety is the cushioned parallelogram mechanism. The innovation alleviates excess pressure on the cutting wheel, protects the drivetrain and extends product lifecycle, according to the manufacturer.

The parallelogram mechanism consists of a rubber torsion element and four heavy-duty link arms that connect the cutting head to the mount frame. When an operator begins to cut into a stump and applies pressure against the cutting wheel, the four link arms move against the rubber torsion element in unison to provide up to 3 in. of cushioned movement for the UltraGrinder cutting head and to keep it 90 degrees to the cut at all times.

The design improves on cushioning systems that are typical in other stump grinder attachments, which rely on springs — and often only a single spring — connected between the mount frame and the cutting head. The spring extends as the machine pushes the cutting wheel into the stump. While this provides some protection, it tilts the wheel away from the ideal 90-degree cutting angle.

A stump grinder attachment that relies on a single spring for cushioning rotates on only one pivot point. As an operator presses into a stump, the cutting wheel tilts out of vertical, changing its angle of attack on the stump by 5 degrees, then 10, then 15 and so on. The angled orientation of the teeth in relation to the stump results in a shallower cut. It also creates what is essentially a ramp, and the cutting wheel is prone to catching and traveling up the ramp to jump out of the cut.

The UltraGrinder also features teeth on both sides of the cutting wheel, which is an ArborWolf exclusive that allows operators to cut safely in both forward and reverse directions through a stump. The cushioned parallelogram mechanism, which cushions in both directions, makes cutting both ways possible.

“You can't squeeze water out of a rock, so if a skid steer is rated for 23 gpm at 3,500 psi, that's what you have to work with,” Homan said. “What we're doing with the UltraGrinder is extracting every ounce of horsepower from the machine and channeling it into the cutting wheel to achieve extreme productivity.”

The cutting wheel also spins at 1,000 rpms. The high rotation rate translates into fast cutting and smooth operation because the potential for wheel grabbing or sudden stops is minimized.

“The UltraGrinder is easy on, easy off and very small so it's easy to carry with you,” Holman said. “It also costs a lot less than other grinder attachments or dedicated equipment. What's most important, though, is the fact that the UltraGrinder is going to save you time and make you even more money when you use it.”