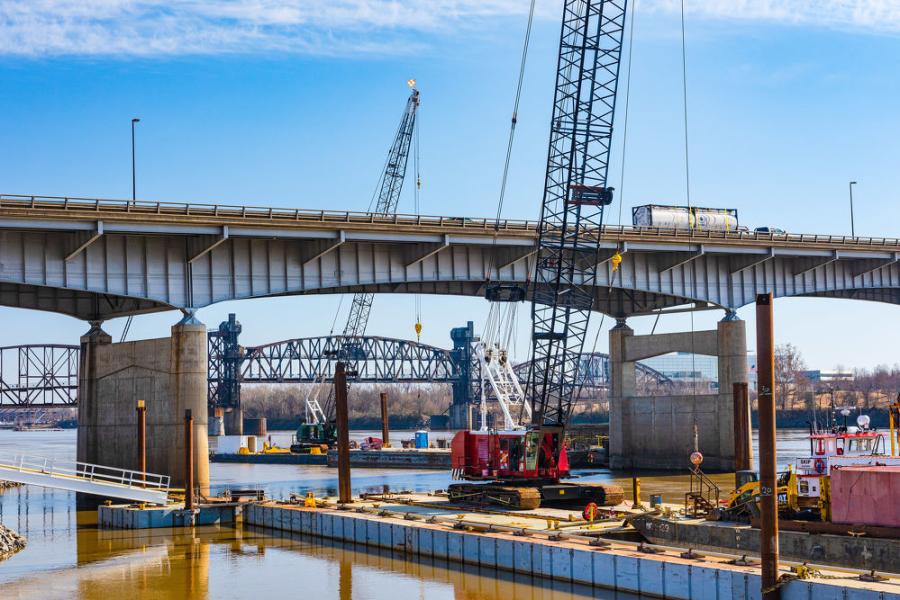 There are 13 cranes on the project, some large enough to drill a 10-ft. shaft.

The state of Arkansas embarked on its biggest highway construction program ever undertaken by the Arkansas Department of Transportation, and the people couldn't be more excited.

"Arkansas is a small state with a population of just three million, but this project touches every corner of the state, with a total of 36 projects in 19 corridors," said Keli Wylie, administrator of the CAP Program and alternative project delivery administrator.

The goals of the Connecting Arkansas Program include improving transportation connections between cities; increasing capacity by widening highways to four or more lanes; improving safety; and easing congestion. Supplementary aims of the program are to support more than 40,000 jobs; drive economic development by making Arkansas locations more desirable to companies to locate and conduct business in; and provide a revenue source for new highway projects.

In 2009, the 87th Arkansas General Assembly passed Act 374 to create a Blue Ribbon Committee on Highway Finance. That committee was charged with figuring out a way to finance transportation improvements and to propose highway finance legislation for the 2011 session. 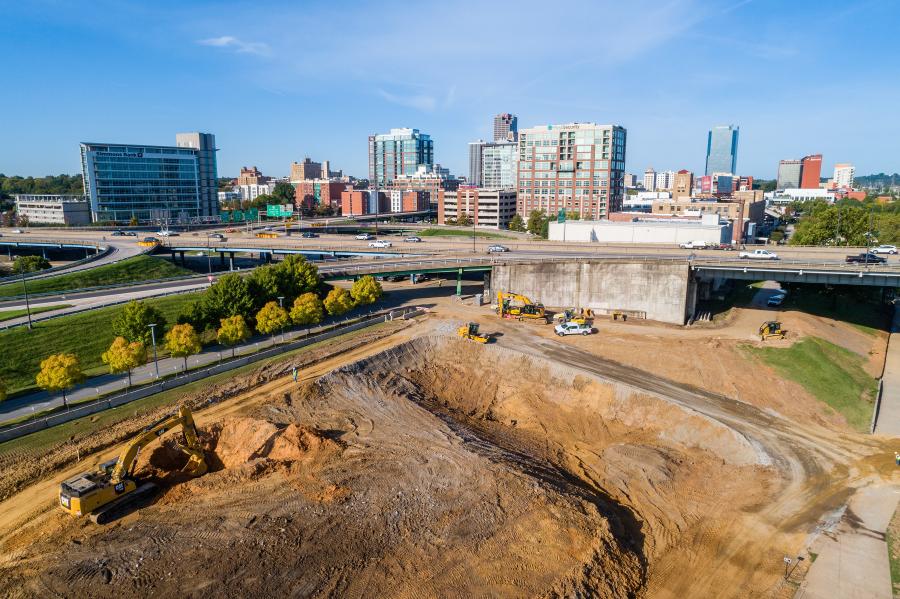 What the committee came up with was a constitutional amendment to levy a temporary sales-and-use tax. The idea received bipartisan approval and was added to the 2012 statewide general election ballot. Arkansas voters approved Ballot Issue No. 1: a constitutional amendment that added a half-cent sales tax for 10 years with proceeds going to improve the state's intermodal transportation system, including projects to widen and improve about 200 mi. of highways and interstates. Taxes are not raised on groceries, medicine or gas. The tax will end after 10 years when the bonds are paid off.

Imposed in July 2013, the state sales tax will contribute $1.8 billion (accrued from 70 percent of the tax revenue) toward highway and interstate construction projects. The remaining 30 percent of the tax revenue with be handed to local governments for road and street projects, with 15 percent each for cities and counties. Approximately $700 million of the money raised will be shared by every city, town and county to repair county roads and city streets. In addition, one cent from the per-gallon motor fuels tax is allocated to a permanent State Aid Street Fund that has been established to allow cities and town to apply for $20 million in additional funds.

"Funding was an issue," Wylie said, emphasizing that the half-cent sales tax — approved by Gov. Mike Beebe, the legislature and the voters — has a sunset clause, meaning it will expire in 2023. Meanwhile, she said, it allows ARDOT to "get the project going faster than if we relied on federal funds" — although they will use federal funds for some highway projects. 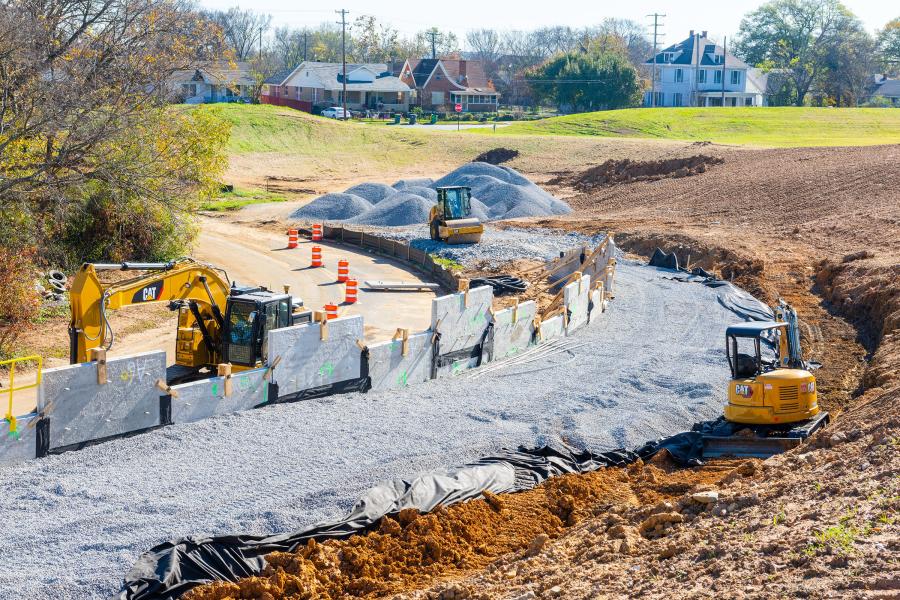 The design-bid-build projects come in a "large range of sizes," she said, from $10 million to $187 million. To help keep track of so many projects, ARDOT contracted with Garver, an Arkansas-based consulting engineering firm specializing in water, transportation, aviation and heavy civil infrastructure.

"Our role is to work with designers and consultants on construction plans, to monitor financials and manage projects," said Earl Mott, program manager and director of construction services.

Garver keeps a master program schedule and works with all the designers to estimate the amount of time needed to get plans ready to bid, factoring in utility relocation and other factors.

Because ARDOT must closely track finances and payout curves with about 20 different contractors over several years and so many projects, Wylie said they "developed a prosecution of progress requirement that forces contractors to be transparent about time and financial progress. Having schedule requirements helps us stay on track and predict the monetary payout over two to three months."

According to Wylie, 17 projects are completed; 12 are currently under construction; and 12 more are yet to be let to bid. A few of the completed projects include:

All contracts include incentives and disincentives, per calendar days, to encourage contractors to adhere to the schedule.

One of the CAP projects currently under way is known as 30 Crossing, or I-30 Pulaski County. The purpose of this $540 million design-build project is to enhance one of the most-traveled roads in the state by increasing capacity and improving safety. 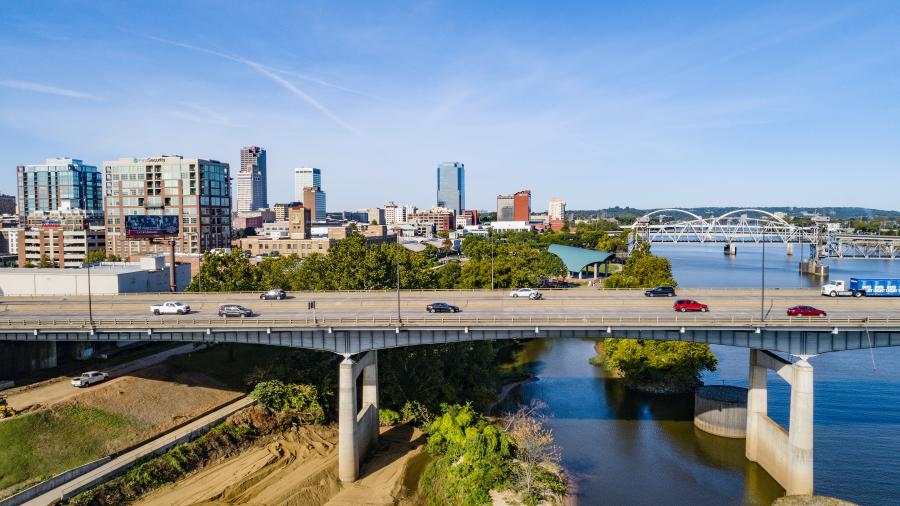 Phase 1 occurs in Little Rock and North Little Rock. The remaining portions of the project will be constructed during future phases. Under general contractor Kiewit Massman Construction, a joint venture, about 100 workers are currently onsite, although Andrew Kimichik, construction manager on the 30 Crossing project in downtown Little Rock (I-30 Corridor in Pulaski County), said the GC is "steadily adding more craft headed into summer. We will likely get to around 150 by the end of summer."

They'll be working on the Arkansas River Bridge — reconstructing it to three through lanes, with two collector-distributor lanes and an auxiliary lane in both directions. The bridge will include an improved opening for the Arkansas River navigational channel.

Crews also will add lanes eastbound in North Little Rock; eastbound through the Broadway Street interchange to Bishop Lindsey Avenue; and reconstruct the Broadway Street interchange. Work includes new pavement and restriping of eastbound I-30 to four lanes to the interchange with I-40, which creates a fourth lane without widening the freeway or bridge structures to add capacity. In addition, they will reconstruct portions of the North Terminal to remove an issue with eastbound I-40 weaving between the North Terminal and the I-40/Highway 67 interchange. They will build a new bridge to carry eastbound I-30 entrance ramp traffic over I-40 eastbound ramp lanes to enter traffic in the far-left eastbound lanes.

Crews will build a new, wider bridge over I-30 at 6th Street. Improvements on I-30 in Little Rock take place above a reconstructed I-30-Highway 10 split diamond interchange and along four main lanes in both directions between 3rd and 9th streets. The split diamond configuration will remove the cloverleaf ramps and provide direct ramp access with the frontage roads.

As part of that work, Highway 10 will be reconstructed along existing 2nd Street and extended from Cumberland Drive, below I-30, to Mahlon Martin Street. The clover leaf ramps will be removed and the right-of-way between President Clinton Avenue and 3rd Street will be regraded to accommodate future use as a public space. Mahlon Martin Street will be extended and improved from East 4th Street to President Clinton Avenue.

Ramp improvements at the I-630 interchange include:

Work on 30 Crossing began in late summer, but Kimichik said the early winter months posed some weather-related challenges due to significantly colder temperatures and the high amount of rainfall Little Rock gets that time of year.

"Kiewit Massman Construction has been closely coordinating with ARDOT and utility owners well in advance of breaking ground to work through all necessary ROW acquisitions and utility relocations to keep the project on schedule," Kimichik said.

Land-based equipment on the project is predominantly new Caterpillar gear purchased by the joint venture from the local Riggs CAT dealer. There are 13 cranes on the project, some large enough to drill a 10-ft. shaft.

"There will be several phases throughout the life of the project that will involve temporary pavement and traffic shifts in order to construct the entire project while maintaining three lanes in either direction along Interstate 30," Kimichik said.

"At this point in the project, we've held three stakeholder meetings since fall of 2020 and have visited several local businesses to communicate the project timeline."

As if CAP1 wasn't a big enough project for Arkansas, plans are already under way for CAP2.

"Funding for the CAP2 is not available until July 2023," Wylie said. "This is when the permanent half-cent sales tax hike takes effect here in Arkansas."

That doesn't mean they'll have CAP2 projects beginning in 2023, she pointed out. CAP2 covers a 20-year span. Some of the highlights include the continuation of widening projects started with CAP1 along major corridors such as Arkansas highways 412, 65, 270 and 82. It also includes new location work on multi-billion-dollar high-priority interstates 49 and 69.

CAP2 goes a little farther by including significant funds for additional lanes on Interstate 40 between North Little Rock and West Memphis, Ark.

By the end of the decade, Arkansas will be the most well-connected state in the union if all projects complete as planned.

Individual Projects Under CAP Include: