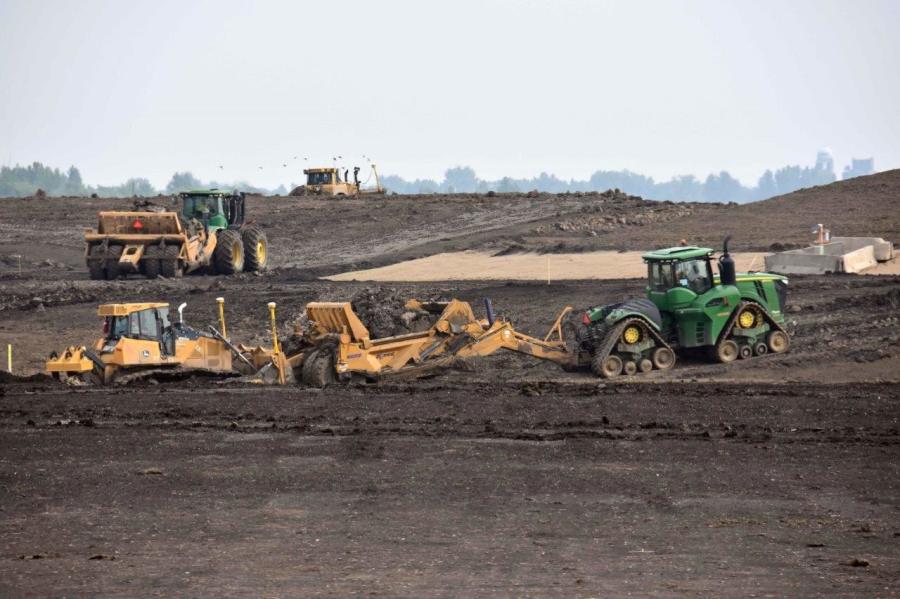 The U.S. Army Corps of Engineers' $2,841,062,000 (current estimate) Fargo-Moorhead Metropolitan Area Flood Risk Management Project is pressing forward, and one of the ongoing elements is the $46,040,475 Diversion Inlet Structure (DIS) initiative in the city of Horace, N.D. (Cass County), which the Corps awarded to Ames Construction Inc.

The overall project, while overseen and managed by the Corps, has contracts being awarded by the Corps and by the Metro Flood Diversion Authority, the city of Fargo, N.D., and the city of Moorhead, Minn., the non-federal sponsors (NFS). The Project Partnership Agreement, signed on July 11, 2016, and amended last March, limits the federal share of the project to $750 million plus inflation — $98,049,996 spent thus far. 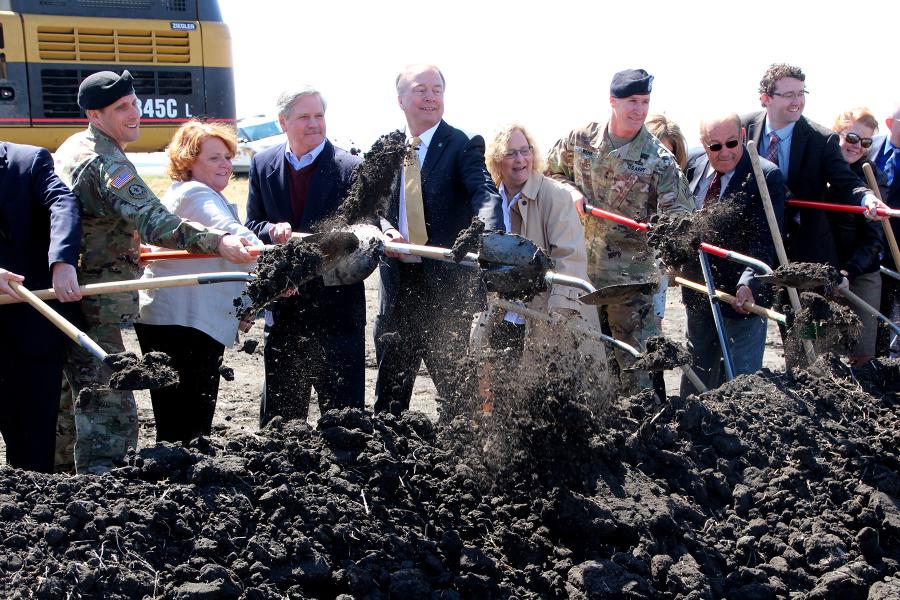 Moreover, the Fargo-Moorhead project is the first from the Corps to use a public-private partnership (P3), which is expected to start operations in 2020.

"The project will provide flood risk reduction for more than 230,000 people and 70 square miles of infrastructure in the communities of Fargo, Moorhead, West Fargo, Horace and Harwood," said Terry Williams, the Corps' program manager of the project. "It's very important that we get it done."

Fargo and Moorhead are located on the west and east banks of the Red River of the North, approximately 150 miles south of the American-Canadian border. Other rivers in the project area include the Wild Rice, Sheyenne, Maple and Rush rivers in North Dakota and the Buffalo River in Minnesota. The need for a comprehensive flood protection system is paramount.

"The Fargo-Moorhead metropolitan area is a major health, educational, cultural and commercial center," the Corps stated. "The area is prone to flooding. The Red River of the North has exceeded the National Weather Service flood stage of 18 feet in 53 of the past 116 years [1902 through 2017], with six of the top 10 floods occurring in the last 30 years. A 500-year event would flood nearly the entire city of Fargo, a large portion of the city of Moorhead and several smaller communities in the area. Flooding occurs not only from the rivers but also from large rainfall events that overwhelm storm drainage systems. Average annual flood damages are estimated at approximately $238 million. Although emergency flood fights have been very successful, the area has a significant risk of catastrophic flooding."

The first Corps (federal) contract was awarded on Dec. 6, 2016 for the DIS, which had construction start in spring 2017. However, this work was suspended in September of that year due to legal issues. 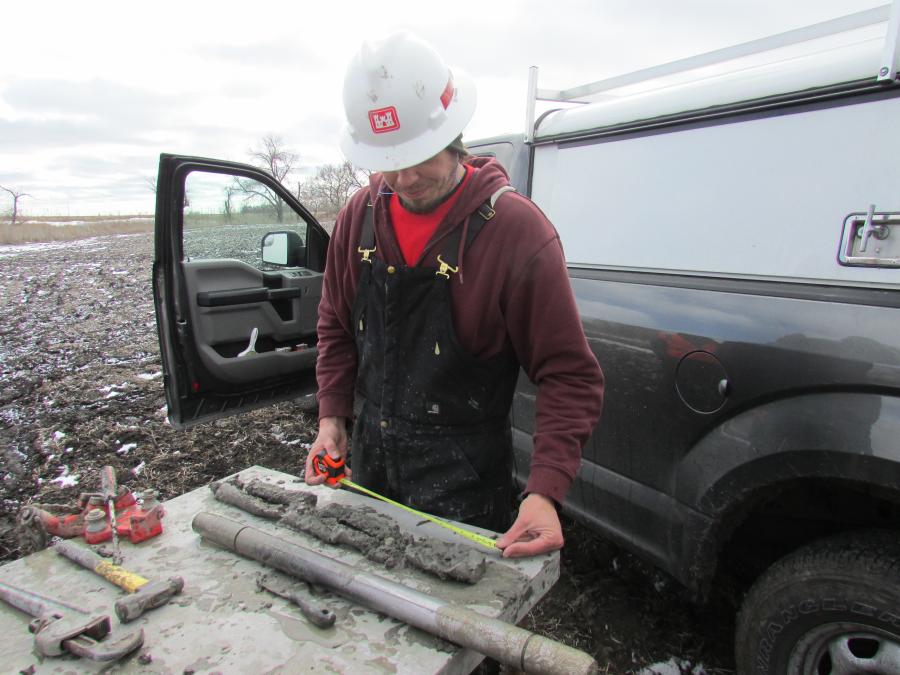 "In October 2016, the state of Minnesota denied an initial permit application submitted by the sponsors," the Corps said. "The Minnesota Department of Natural Resources and the Richland/Wilkin Joint Powers Authority filed a lawsuit alleging that Minnesota permits are required prior to construction. On September 7, 2017, the court issued an injunction against the Corps and the sponsors requiring all construction efforts cease pending the decision on the merits of the underlying litigation. The litigation was then stayed while the North Dakota and Minnesota governors assembled a task force to find a solution permittable by Minnesota while maintaining federal authorization.

"‘Plan B' was developed, which balances impacts and benefits between the two states," the Corps added. "In December 2018, the state of Minnesota issued the Dam Safety/Public Waters Permit and signed the Record of Decision for the supplemental environmental impact statement. The St. Paul District signed a Finding of No Significant Impact for a Supplemental Environmental Assessment in February 2019. The injunction was modified on April 8, 2019, to allow construction to resume in North Dakota and for design-related activities to resume in both North Dakota and Minnesota."

The scheduled completion date for the overall project could occur in 2027, but it's still to be finalized. The Diversion Authority has short-listed three firms for the P3 contract that will design, construct, operate and maintain the diversion channel and associated infrastructure.

"That process was also delayed by the litigation," Williams said. "Until you get the proposals, you don't truly know what the completion date is. A goal of doing this using a P3 is to allow the proposer to be creative in getting it done. In addition, construction of the southern embankment is dependent upon federal funding, which is determined and provided annually. When we build projects like this, our non-federal sponsors are ultimately responsible for the operation and maintenance of the infrastructure, and they buy and own the land where they are located." 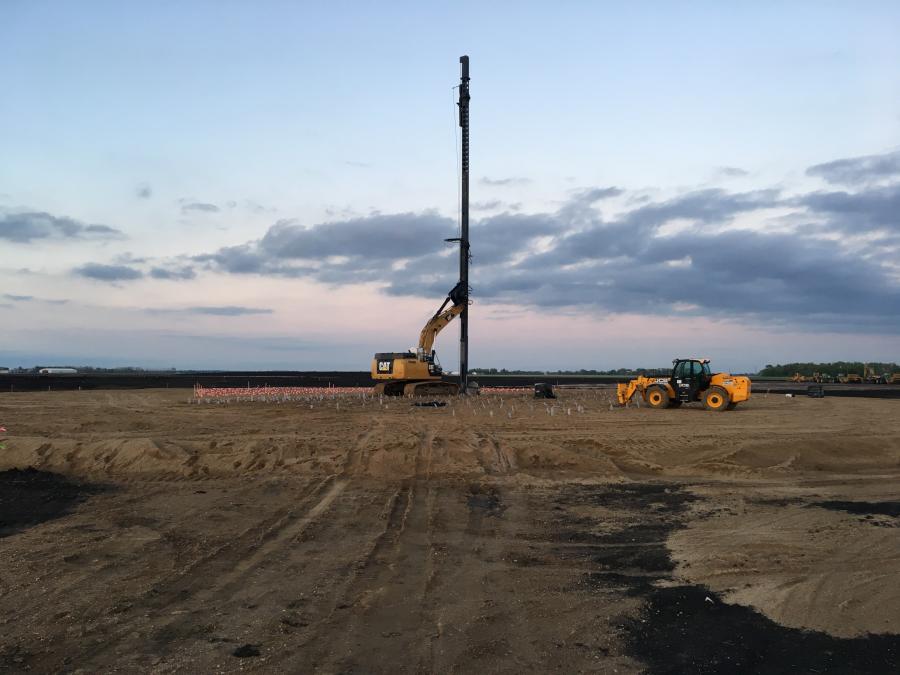 The design team for the DIS consists of people from the St. Paul district office and structural engineers from Corps locations across the country. This type of collaboration is also being used to design the other features of the southern embankment.

"There's experience across the nation in designing large gated structures," Williams said. "It was awesome to be able to tap into that talent."

The land where the overall project is being built is very flat, but it relies on gravity to have the water flow from the dam and embankment down the diversion channel. The Red River flows northwards. One of the engineering and construction challenges for DIS is the soil.

"It's a clay soil and you don't get a lot of seepage," Williams explained, "And they're getting a lot of rain in the Fargo-Moorhead areas. Ames crews are now installing pipes to de-water the excavated area, which currently looks like a small lake. The pumping operations should take about three or four weeks to complete, with the water to be properly diverted to a nearby river."

Once the area is drained and dries up, Ames will be pile load testing.

"They will build a frame and drive the different types of pile to determine how to drive the production piles — the depths and the numbers needed," said Williams.

Williams noted that the soils in the Red River Valley are unique and that the project work requires deep soil mixing beneath the downstream stilling basin to preclude rebound of the foundation soils when unloaded. To date the NFS has spent about $100 million for internal protection projects. 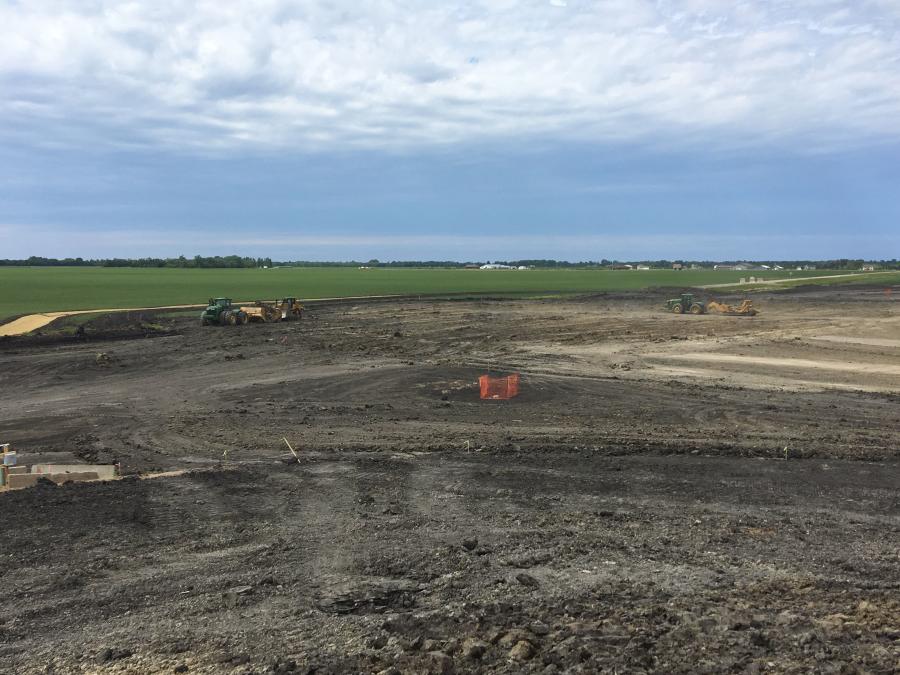 "They built new pump stations, flood walls and levies and have upgraded some of their flood control systems that work in concert with the federal project," Williams said. "These features will increase the amount of water that can flow through the town when the project is operating, and it has also provided benefits now. During this past spring, the new infrastructure was tested by the floods. They are also required for the overall federal project, which includes the diversion channel and the southern embankment."

Work on the DIS, which is being built on flat, former farmland, resumed last June. The initial work took place between April and June 2017. This project includes construction of a concrete control structure with three gates that will regulate flows into the diversion channel. The current construction completion date is June 2023. The focus of the 2017 construction season was earth work operations.

"They were excavating the channel portion and placing that material to build the dam embankment portions," Williams said. "They also installed three preload areas for consolidation of foundation soils to preclude differential settlement."

For this part of the operation, Ames Construction crews used excavators, dozers and loaders. According to Williams, any excess excavated material can be stored on land provided by the NFS and used by the diversion channel contractor if needed.

The 2019 construction season will see some additional excavation work to complete the channel, along with pile load testing. Future work on the DIS includes deep soil mixing, pile driving, mass concrete pours and setting the gates and machinery. The dam embankments will be turf-covered, for which seeding is anticipated in 2023 and established in 2024.

The channel itself, upstream and downstream, will include rip rap protection and a concrete stilling basin will be constructed immediately downstream of the structure. Two of the preloaded areas are about 800 feet apart from each other and are located where the gated concrete structure and earthen embankments meet. The gates will only be opened during the flood season to allow releases out of the dam into the diversion channel. 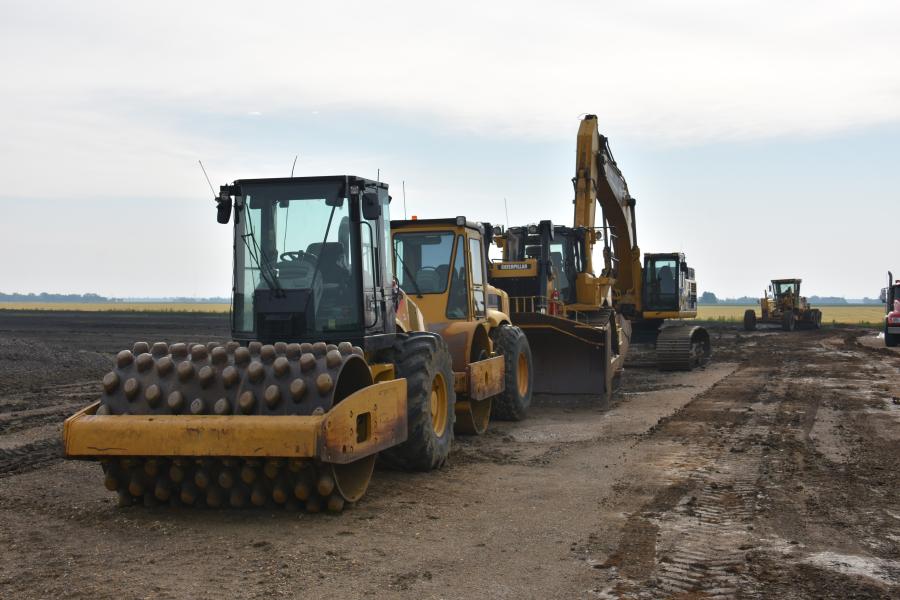 Ames has the opportunity to do some work during the winter, which could include concrete pours.

"We do restrict construction of the earthen dam embankment during the winter because it is unlikely that specifications can be met in frozen conditions," Williams said.

The work site, being outside of the metropolitan area, is beneficial to Ames as there is plenty of land to set up field offices and staging areas, with minimal traffic on the adjacent country roads. Ensuring that issues that arise are dealt with rapidly is crucial for the Corps.

"We set up our contracts so that there are regular communication meetings and meetings prior to when any feature of the work proceeds," Williams explained. "We also include our non-federal sponsors in these meetings because they are our partners and the work is taking place in their own backyard."

The Corps has a construction office on-site that administers the contract and performs quality assurance inspections on the work of Ames while engineers at the St. Paul office provide support as well.

A second Corps contract for the overall project is being prepared, and a request for proposals was issued on July 22. This work will focus on constructing the Wild Rice River Structure — a two-gated structure that will meter flows on the Wild Rice River. The Corps is looking to award a contract in November-December 2019, and the general contractor is expected to start operations in the 2020 construction season. CEG