Scheduled to open in 2018, the 92,500 sq. ft. building will be only slightly larger than the original, nearly 80 year-old Bell museum now located on the Minneapolis campus. 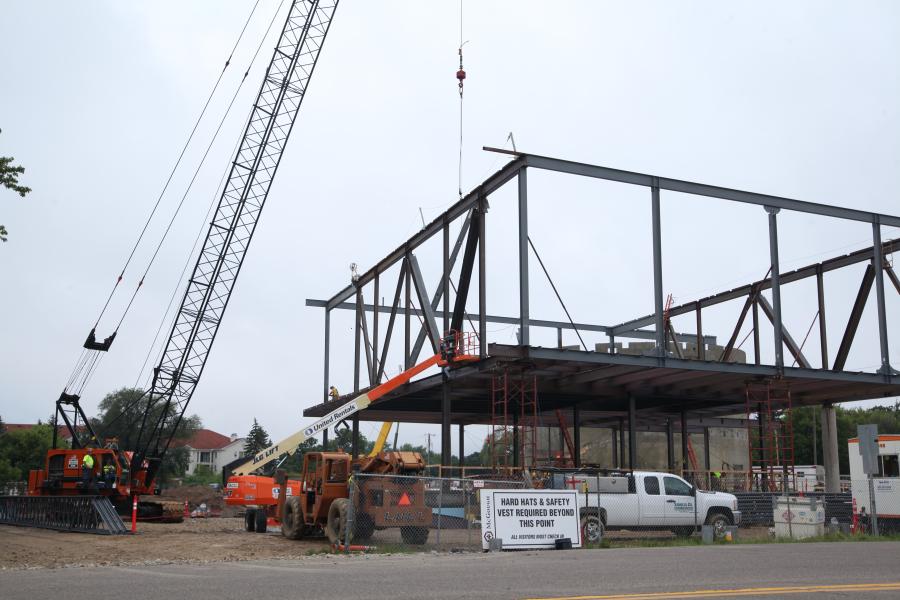 McGough rolls in a pair of Terex and Manitowoc cranes for the steel picks. Completing the concrete drum housing the planetarium was critical to the steel schedule because it is a load carrying structure for the museum.

Blending art, technology and Minnesota building materials, construction is winding down on a new Bell Museum of Natural History and Planetarium on the St. Paul campus of the University of Minnesota.

Scheduled to open in 2018, the 92,500 sq. ft. building will be only slightly larger than the original, nearly 80 year-old Bell museum now located on the Minneapolis campus. However, the new facility dedicates more square footage to public exhibit space and will move visitors through the displays more efficiently.

McGough Construction, based in St. Paul, Minn., took on the $64.2 million project. With its roots in Ireland, McGough is now a sixth generation, family owned company specializing in all areas of construction, planning and management services.

The company takes on projects throughout the country.

The Minneapolis firm Perkins + Will, designed the new museum.

When the museum opens to the public in 2018, it will celebrate the old and the new. Dozens of the original dioramas featuring three dimensional scenes that highlight habitats and animals native to Minnesota and were the foundation of the first museum will be moved to the new facility.

These include 10 of the museum's large signature dioramas featuring timber wolves, moose and sandhill cranes and backed by colorful murals painted by renown artist and Minnesota native Francis Lee Jaques.

New to these displays are inter-active educational touch screens to identify and detail the plant, animal species and habitats displayed in the dioramas.

Visitors will be invited to learn and discover as they explore the museum.

After a 15-year absence in Minneapolis, when the only planetarium in this area was lost from the demolition of the main branch of the city's library; museum visitors now have a new and much more versatile, 120 seat planetarium to explore the infinitely large and small.

It will not only be capable of visually looking out to the extremes of our universe it also will bring visitors into the human body.

Astro-Tec, headquartered in Ohio, provided the behind the scenes technology for the planetarium.

It is notable because of its Ulteria Seam technology applying a specialized crimping process to eliminate lines in the projected image and is the first of its kind screen in North America.

To bring the dome images to life, two projectors, one at the back and one at the front project onto the dome and blend as one image, so that the audience is submersed in the whole image from front to back, said Adam Rustad, McGough project manager.

Along with the planetarium, a discovery room will be stocked with live insects, reptiles and other animals to encourage “visitors to ask questions, touch specimens and make their own discoveries,” according to a University of Minnesota publicity handout.

Indoors, the museum features an architectural grand stair way spiraling up to the second floor and partially wrapping around the planetarium; located in the center of the building and is literally the “centerpiece” of the exhibit space.

Facing the stairwell is a decorative, 30 ft. stainless steel elliptical cast carved into the concrete drum structure that houses the planetarium.

These environmental amenities include solar panels that will provide up to 5 percent of the power to the building, a pollinator garden and a storm-water catchment system made up of constructed wet lands and a pond to retain 95 percent of the run-off on site.

Minnesota building materials include the steel beams for the skeleton processed from iron ore mined from the open pits of northern Minnesota's Iron Range.

Fritted glass covering 18,000 sq. ft. of the building manufactured by Viacron located in Owatonna, Minn., will make it bird safe and reduce energy loss at the same time.

White Pine logged from the Cass Lake region of Minnesota will cover another 18,000 sq. ft. of the building and is thermally modified to reduce energy loss.

Large, granite cores 6 ft. high and 5 ft. in diameter mined near the city of Morton, Minn., and stationed outside the museum will highlight the state's granite resources.

Outdoors, plants native to the state to encourage honey bee pollinating will surround the new building.

Other construction materials include 9,000 sq. ft. of polished, stainless steel soffits, 3,900 cu. yds. of concrete and 505 tons of structural steel.

“There are all these elements of the construction material that were chosen because they represent these important industries and regions of our state,” said Andria Waclawski, Bell Museum communications manager.

Sitting on a 5-acre piece of land, on the far, northwestern corner of the campus, it will welcome staff, students and visitors.

Not only will it be a gateway to the campus, it also is a “gateway to understanding all of the science happening at the university every day.

“Being part of the university, we not only have scientific curators that are doing research all over the world, we also maintain scientific collections that support other scientists, students, educators or agencies in research, teaching and conservation planning,” Waclawski said.

Construction began in May 2016. Work crews and operators at the controls of a variety of Cat equipment including excavators, dozers, rollers and graders, began digging into the soil to make room for the platform footings, foundations and walls.

It is a structure packed with technology and unique construction that required a bit of a learning curve, said Rick Steinberger, McGough construction superintendent.

Concrete work included the construction of a two story, 68.1 ft. diameter drum to house the future planetarium. Completing the drum was scheduled to go several weeks longer then the foundation and wall work because of its complexity.

It also was critical to the steel schedule. With walls 9 in. thick, it is a load bearing structure for the roof beams.

“We started the concrete drum right away because we knew it was going to be a little bit different. We had a new form system to maintain a true radius so there were challenges that took us a little additional time on the front end,” explained Steinberger.

“We took half the circle each time and kept jumping it. Once we figured out a good system, it took roughly two weeks of forming and concrete pours,” to complete each of the eight segments that make up the drum, Steinberger said.

The installation of the planetarium dome depended on precise planning and construction execution. Tight coordination with the steel supplier, Lejuene Steel based in Minneapolis, was critical because it is suspended from above and not anchored to the drum to eliminate vibrations.

It is an assembled, perforated 52 ft. diameter dome placed at a 15 degree tilt and made up sections that fit through a 3 by 7 ft. door. It is suspended from 22 points above the ceiling and braced laterally at 16 points.

These points all had to be identified before any channel irons to carry the dome were hung, said Steinberger.

Before installing the dome, crews built a platform inside the drum with a layout of the planetarium dome on that platform. They “lazered the anchor points up to finalize them and we set them fairly close to where they all needed to be to support the dome,” Steinberger said.

Everything inside the dome is acoustically treated. There are acoustical slips on the metal studs for the double layer dry wall, the whole ceiling structure is hung with spring isolators, all the mechanical is hung on spring isolators and 6 in. of acoustical insulation on the ceiling.

During the foundation and wall pours early on in construction, crews battled heavy rains. Up to 7 in. of rain fell at one time through this stretch of monsoon weather that led to wash outs around the footings and foundations and lost days from the wet weather.

“We had some major slope wash outs of the sand banks in and around our footings. We had to re-excavate so we could get down and let the soil dry out to get our water proofing detailing done to meet our structural steel date.

“We had over 20 inches of rain during our foundation construction. It was a bit of a challenge, a definite time factor, but overall we played catch-up and kept our form sequences going. We had really great preconstruction planning and knew how we were going to build the foundations and we followed the plan pretty much to a T,” Steinberger said.

The site geology also worked in the favor of the construction in many ways and helped overcome the additional work caused by the rain deluges.

Below the surface there is a 7 ft. layer of clay. Below that sits course sand that Steinberger called “real compactible and drainable.”

It was a readily available material on site to use as a base for the concrete slab and foundations. It dried quickly to allow crews to repair the washed out areas and moved construction forward without further delays.

It also was excavated for the base of the 120 vehicle capacity parking lot; an amenity the original Bell Museum did not have because of its location in the heart of the Minneapolis campus.

When the foundations and slab on grade were poured, the first structural steel shipments rolled in on schedule and the crews started going vertical and worked the steel from the east to the west side of the building.

McGough rolled in a pair of American and Manitowoc cranes for the steel picks.

One of the challenges throughout the interior construction was coordinating the evolving exhibit design plans with the internal electrical plans to make sure “everything was on track,” Steinberger said.

“That's understandable,” said Steinberger. “Things change and we are trying to accommodate their needs throughout construction.”

As construction comes to a close, Steinberger commented that “even though the building has gone well, it's been a challenge. And when finished, this is one project the whole team should be proud of.”

With the completion date approaching, the building structure has been completed while the interior wiring and mechanical systems continued to be installed. Work also continues on the outdoor displays, the storm water ponding systems and the parking lot.

McGough crews and sub-contractors are on scheduled to turn the building over to the University of Minnesota in August as exhibit installation ramps up.

“In addition to the detailed work of reassembling the museum's famous dioramas, museum staff and Virginia-based exhibit design firm Design and Production Incorporated will install education classrooms, the interactive Touch and See Lab, museum shop, signage and gallery displays between this summer and the grand opening in the summer of 2018,” Waclawski said.