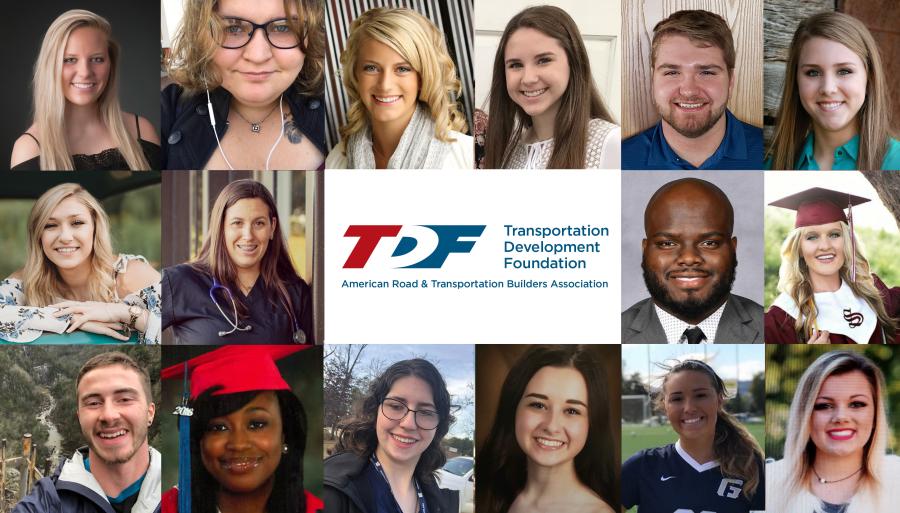 Now in its 20th year, the program was established with a gift from two Roanoke, Va., highway contractors and their companies — Stan Lanford (1999 ARTBA chairman) of Lanford Brothers, and Jack Lanford (1991 ARTBA chairman), with Adams Construction Company. More than 100 highway workers are killed annually in roadway construction and maintenance accidents, and thousands more are seriously injured.

The scholarship fund is supported today by transportation design and construction firms and their executives, labor unions, the American Association of State Highway and Transportation Officials (AASHTO), and industry foundations.

More than 180 scholarships have been given to students from 32 states to pursue undergraduate and graduate courses as well as technical training.

Caitlyn's father, James "Bubba" Rains, was killed in 2013 while working in a night construction zone for APAC Tennessee. Caitlyn is studying respiratory therapy at Arkansas State University, where she will be a junior.

Stan's father, Standra Jones Sr., died in 2007 after being struck by a vehicle while at work for the South Carolina Department of Transportation. Stan will be in his first year of graduate studies in architecture at Clemson University in South Carolina.

Willie's mother, Kathy Blevins, worked for the Gwinnett County Department of Transportation. She had just finished painting turn-lane lines when her vehicle was struck and she was killed in 2004. Willie, a mechanical engineering major, will be a senior at the University of Georgia.

Amy and Misty's father, Jeffrey McNeil, was killed in 2005 while working for the Texas Department of Transportation. Amy is in registered nursing school at Lamar State College in Port Arthur. Misty will be a junior at Lamar Institute of Technology in Beaumont where she studies radiological technology.

Victoria's father, John Markle, was struck and killed on Florida's I-75 in March 2016 while working for Ajax Paving Industries. Victoria is majoring in early childhood education and will be a junior at Charlotte Technical College in Port Charlotte.

Kristen and Jenna's father, Gregory Jares, was killed in 2001 while working for the Texas Department of Transportation special crews. Jenna will be a freshman studying occupational therapy at the University of Mary Hardin-Baylor in Belton, where her sister Kristen is a senior majoring in exercise physiology.

Hadley's father, Darin Voudrie, was struck and killed while working for Jefferson County Roads and Transportation in 2015. Hadley will be a sophomore at Jefferson State Community College in Birmingham, where she studies elementary education.

Carolyn's father, Scott Lillis, was permanently disabled in 2015 while driving in a work zone for his employer Knife River Corporation. Carolyn will be a sophomore at Oregon State University in Corvallis where she studies physical therapy.

Mashawn's father, Shawn Blubaugh, died in 2010 while working for the Ohio Department of Transportation. Mashawn will be a sophomore at Kent State University and is majoring in early childhood education.

Jacob's father, David Schwarz, was killed in 2017 while operating equipment for the Illinois State Toll Highway Authority. Jacob studies animation with a concentration in computers at Columbia College in Chicago. He will be a senior.

Kaitlyn's dad, Gary Henry, was struck by a construction vehicle and killed in 2013 while working on a state highway construction project on Interstate 270 near Columbus, Ohio. Kaitlyn is pursuing her master's in applied behavior analysis at Ball State in Muncie, Ind.

Andrea's father, Shannon Pair, was struck and killed while working for Time Striping Inc., in 1998. Andrea is in her second year of graduate school at Harding University's College of Pharmacy in Searcy, Ark.

Cirar's father, Henry Butler Jr., was killed was driving a Mississippi Department of Transportation work truck during highway repairs in 2014. Cirar will be a junior studying physical therapy at Mississippi Valley State University in Itta Bena.

Faith's father, John Shoemaker, was killed in an aviation accident while returning from a job site for Webster Scale Inc., a highway construction and heavy equipment company. Faith is studying construction management at South Dakota State University in Brookings.

The scholarship fund received financial support in 2018 from the following: