At Least 35 Dead in Bridge Collapse 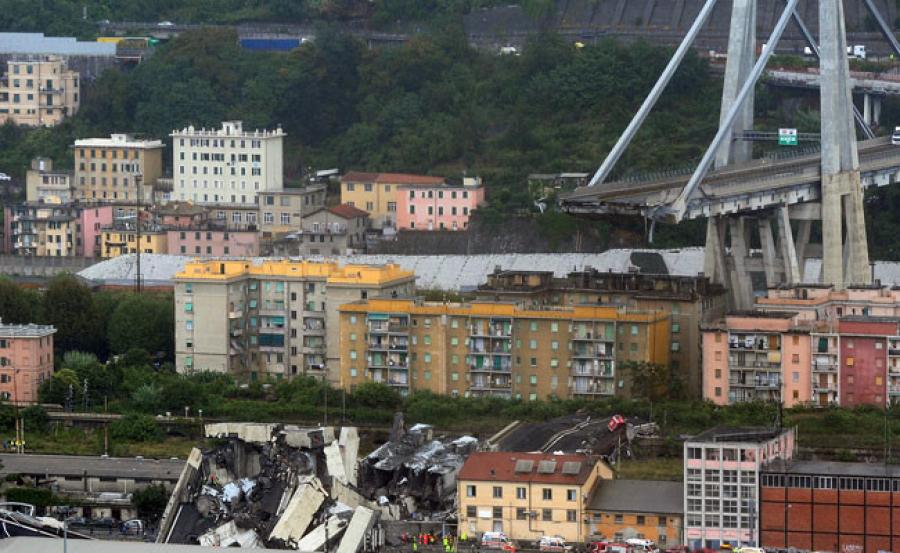 The Morandi Bridge, in Genoa, Italy, collapsed after a violent, sudden rainstorm hit around 11:30 a.m. on Aug. 14. (Photo credit: NDTV)

A bridge collapse in Italy has killed at least 20 people and injured at least 13.

The Morandi Bridge, in Genoa, Italy, collapsed after a violent, sudden rainstorm hit around 11:30 a.m. on Aug. 14. According to the head of the local ambulance service there were dozens of fatalities, Adnkronos, an Italian news agency, reported. Local police said that at least 20 people were killed, and 20 vehicles were involved in the tragedy, Reuters reported.

Initial reports said that there were people trapped beneath the debris, BBC reported.

Sky TG24 reported that a 200-meter portion of the bridge that spanned over an industrial area collapsed; Italy's Interior Minister Matteo Salvini said around 200 firefighters were responding to the scene, the Chicago Tribune reported.

“We are following minute by minute the situation for the bridge collapse in Genoa,” Salvini tweeted.

Built in the 1960s, the Morandi Bridge sits 90 meters high and spans about ¾ of a mile long. The longest portion in between supports is about 200 meters. It is part of the major A10 highway that connects Italy with France.

The bridge had undergone some updates in 2016: According to the highway operator, work had been underway to shore up the bridge's foundation at the time of the collapse. The operator said that because of the ongoing work, the bridge was being constantly monitored, Reuters reported.

Transport Minister Danilo Toninelli tweeted that he was “following with great apprehension what seems like an immense tragedy.”