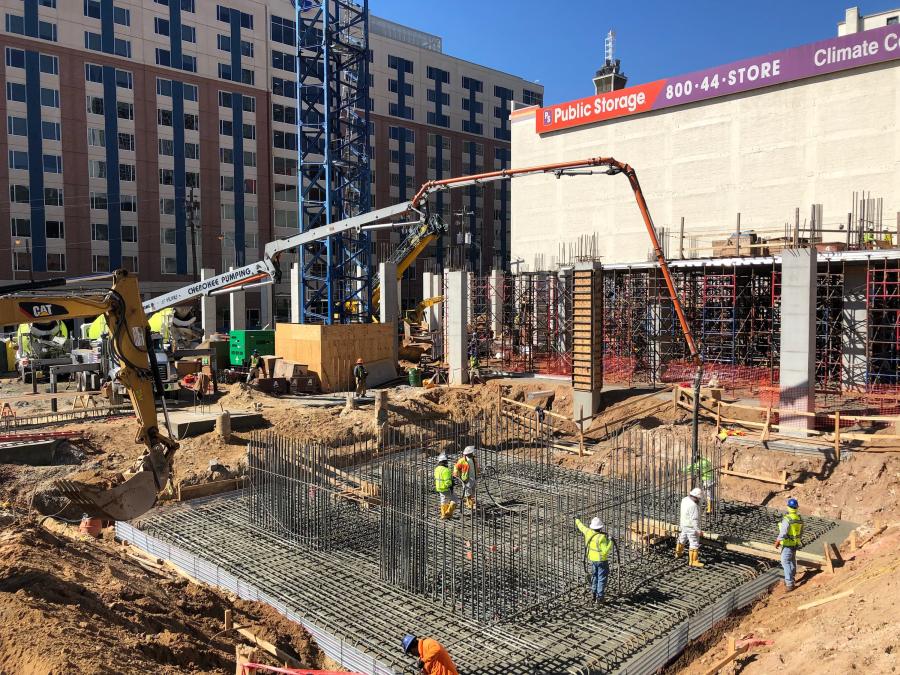 JE Dunn is building 26-story apartment building in downtown Atlanta that will house students from Georgia State University and other institutions.

JE Dunn Construction is moving forward rapidly on a $65 million, 26-story apartment building in downtown Atlanta that will provide 237 units and 685 beds for students from Georgia State University and other institutions.

Putting up building in a major downtown area is no picnic, and that is certainly the case for the L-shaped, 467,125-sq.-ft. tower that will adorn the city's skyline.

The project is a private initiative by South City Partners (SCP), a multifamily development company. Construction started Jan. 2. The tower will contain 8,136 sq. ft. of retail space and a five-story, 78,379-sq.-ft., above-ground parking facility with an amenity floor above it that will include a resort-style pool and clubhouse, a rooftop deck, and a grilling area.

The tower also will feature amenities such as onsite study room, a fitness center, an Internet café and Wi-Fi.

The project is expected to be completed by August 2019, just in time for the fall semester.

"The project has been in planning since early 2016," said Will Casaday, development manager of SCP. "The goal is to deliver a superior living experience for students of a growing university, as well as help spur additional growth around the campus of GSU.

"Basic accommodations already exist in this market, whereas premium accommodations do not," he added. "We've always been a top-of-market developer, so we pride ourselves on delivering an experience to our residents that's unmatched in a market. We are delighted to be working with the team at JE Dunn on another great project. Together, we have a long and very successful history of delivering best-in-class developments on time and on budget."

The tower project is the fifth that JE Dunn has built in partnership with SCP. Preston Partnership LLC is the architect of record.

So far, crews have placed the concrete structure for 22 floors, added framing and sheathing up to Level 14 and installed glazing on 12 floors. HVAC, electrical, and drywall crews have become active as successive floors are prepared.

This concrete structural work is being supported by a JE Dunn tower crane placed near the inside vertex of the building to maximize its effectiveness.

"The biggest challenges are working on a tight site in a downtown environment," said Ed von Roemer, JE Dunn's senior project manager. "Safety is always our first concern, as well as making sure that we're not impacting students or local traffic. We're situated on a rectangular site, and two sides of it are taken up by buildings. We are fortunate to have one outside corner that is our laydown area, where we take deliveries. It's big enough to get a tractor-trailer inside and off-load it."

Because JE Dunn has worked with SCP on other projects, von Roemer and his team had several months to plan the schedule and benchmarks and do the budgeting, which allowed contracts with subcontractors to be signed far in advance. Moreover, having managed previous tower projects in Atlanta, he applied several lessons on this one.

"A typical foundation component consists of installation of multiple long caissons that go approximately 65 feet deep with a big auger that either achieves baring or the max design depth engineers decide it is deep enough for a foundation," von Roemer said. "The process takes out a tremendous amount of dirt and if you have any contaminated soil, that is another issue altogether.

"We found out, on other projects, that smaller auger-cast piles, where you use more, drilled to the design depth of 65 feet in this case, and bridged together with concrete footings to spread the load, cuts down on approximately 60 to 75 percent of the spoils that you take out from a conventional caisson project. This can result in huge savings of time and money.

"We thought that in downtown Atlanta, there may be a considerable amount of contaminated soils, especially with a former gas station on the site," he added. "Luckily there wasn't much in our case. The auger casts holes are filled with concrete and cylindrical cages are then wet set."

The utility connections for the two buildings and gas station on the site, which were demolished in November and December 2017, had to be cut and capped. Once this was done, the site was ready for the earth and foundation work.

The new utilities — water, sprinklers, sanitary and storm drains, gas, electric, and communications — are all linked to existing connections on the street.

The tower's footprint is 29,000-sq.-ft., and the slab is about 12 in. deep, although foundation component depth varies. The work started in late January and was ready by mid-March. Roughly 3,000 cu. yds. of soil was hauled off from the foundations and auger cast piles, but JE Dunn also had to bring some dirt as well to support its operations. When completed, nearly 18,000 cu. yds. of concrete will have been poured.

"It was an extremely tight area, but we had enough room to keep the operation going," von Roemer said. "We would dig a footing, place a footing, stockpile dirt, and use that dirt to backfill another area. It was close to a balanced site, but we did export some material. We had limited space during the excavation phase for larger equipment like bulldozers, backhoes, and track hoes, and they might be there for two weeks. To shift dirt from one spot to another we brought in a track loader."

Due to strict municipal regulations regarding traffic flow, deliveries of earthwork and foundation equipment sometimes had to take place during off hours, as did deliveries of new materials and removal of earth from the site.

Work on the above-ground floors, based on a post-tensioned deck system, began as soon as the foundation was ready.

"They are essentially long cables that run throughout the slab," said von Roemer. "After the concrete cures, they stress the cables, put them under tension and that (with the columns and beams) supports the slabs. Once the concrete cures, everything is checked by an engineer, and the reshores are removed."

It took about two weeks to complete each of the first six floors. Since then, each residential floor has taken about one week to complete.

"We pour half of the floor on the first day and the next day we build the columns," said von Roemer. "The fourth day we pour the other side and put the columns in on the fifth day. The last day of the cycle is when we catch everything up. It's nice when you get a typical floor where nothing changes and the more you do it, the faster you get. Our crews have developed a good rhythm."

The tower does not have a basement. The boiler room will be placed on the roof, which will also house the air-conditioning condenser units. Temporary roofs have been placed on both the eighth and 16th floors.

"This allows the rough-ins and finish work to continue right behind the windows and exterior skin," said von Roemer. "We started doing this work on the 14th floor. They install the stud walls, put in the rigid ductworks, plumbing and electrical, and then come back to frame the ceilings. After the inspections, they can start on the drywalls. It's like an assembly line once you start on typical floors, it's repetition going from floor-to-floor. Once the crews have gotten past the learning curve on the lower floors, it just takes off and production increases."

The interior work is ongoing on the lower floors, with electrical, plumbing, and HVAC crews engaged as each new floor becomes ready for them. The glazing units are brought to each floor via the material hoists or lifted by the tower crane and installed rapidly.

"I'm fortunate to be a part of an outstanding JE Dunn team on this project," said von Roemer. "We have a good group of superintendents and office support — engineers and project managers — that makes sure everything goes together and everyone truly works as a team."

There are approximately 200 workers on site, and many local subcontractors have been hired.

Safety is our "highest priority and nothing is taken for granted at daily safety meetings, with OSHA rules for exterior and confined spaces followed meticulously," said von Roemer, "and we go above OSHA standards and have our own safety program that's more stringent. Every person on our team lives by that and ensures that everybody is safe. Our goal for the end of the day is that everybody goes home the way they came in."

Safety issues for confined spaces include monitoring the atmosphere, eliminating or controlling hazards, proper ventilation, having trained attendants, being prepared for rescues and planning for emergencies, and emphasizing constant communication.

JE Dunn has about 50 pieces of equipment from its fleet coming in and out of the site on an as-needed basis. Since the project began, it has been using loaders, excavators, forklifts, scissor lifts, skid steers, compactors, and other items.

"The cranes and placing booms are where the parts wear out the most, because they are constantly being used," von Roemer said. "Our cranes are inspected regularly, and when required, parts are replaced, and the cranes are recabled and lifted. We just added multiple sections to our tower crane to be able to complete the top of the building."