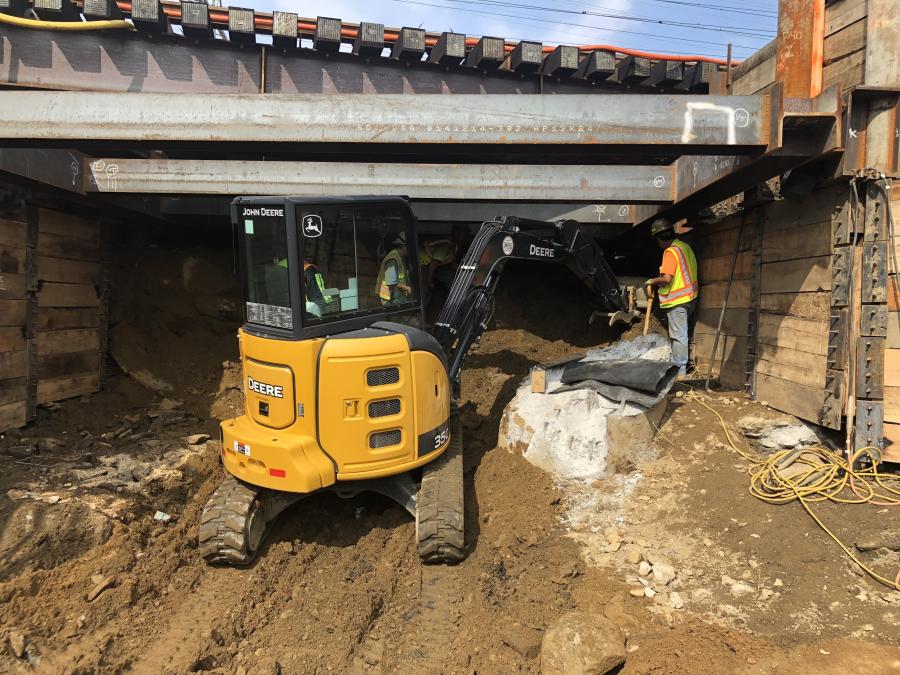 Crews tunnel under the five live tracks to construct abutment #1. 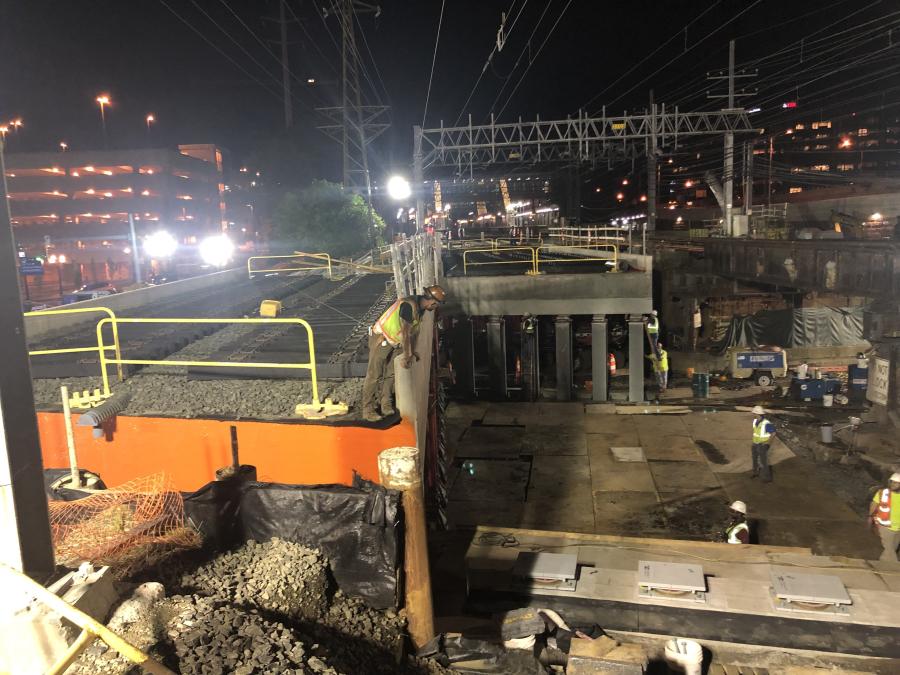 When the project was announced in 2013, the Connecticut State Department of Transportation (CTDOT) stated that the Atlantic Street underpass was originally constructed in 1896.

"The purpose of this project is to improve the horizontal and vertical geometry for Atlantic Street at the bridge, to increase the roadway capacity by providing additional travel lanes on Atlantic Street, and to improve pedestrian circulation in the vicinity of the Transportation Center. It was also determined that the project should include provisions for an additional track for the railroad, as well as a platform to service this track."

It announced that "Phase 2 work includes replacing the Metro North/Atlantic Street bridge, the reconstruction of Atlantic Street and infrastructure improvements to the Stamford Train Station."

Ray Engen, a project superintendent of Yonkers Contracting and Halmer International said Phase 1, which began in 2016 and was completed in 2018, was a preparatory project for Phase 2.

"The existing exit-8 off-ramp for I-95 North was pushed to the north and a new bridge was built over Atlantic Street. South State Street was also pushed to the north after the previous off-ramp was moved," he said. "Phase 1 also relocated all buried electric and telephone/fiber utilities on Atlantic Street into three 42 in. diameter jack and bore pipes constructed under all five MNR tracks. Phase 1 consisted of soldier pile and lagging with a concrete faced retaining wall from the train station to Canal Street along I-95 and the new off-ramp. All new drainage and sanitary sewer on South State Street was also constructed during Phase 1, which won an Excellence in Construction Award from CTDOT in 2018." 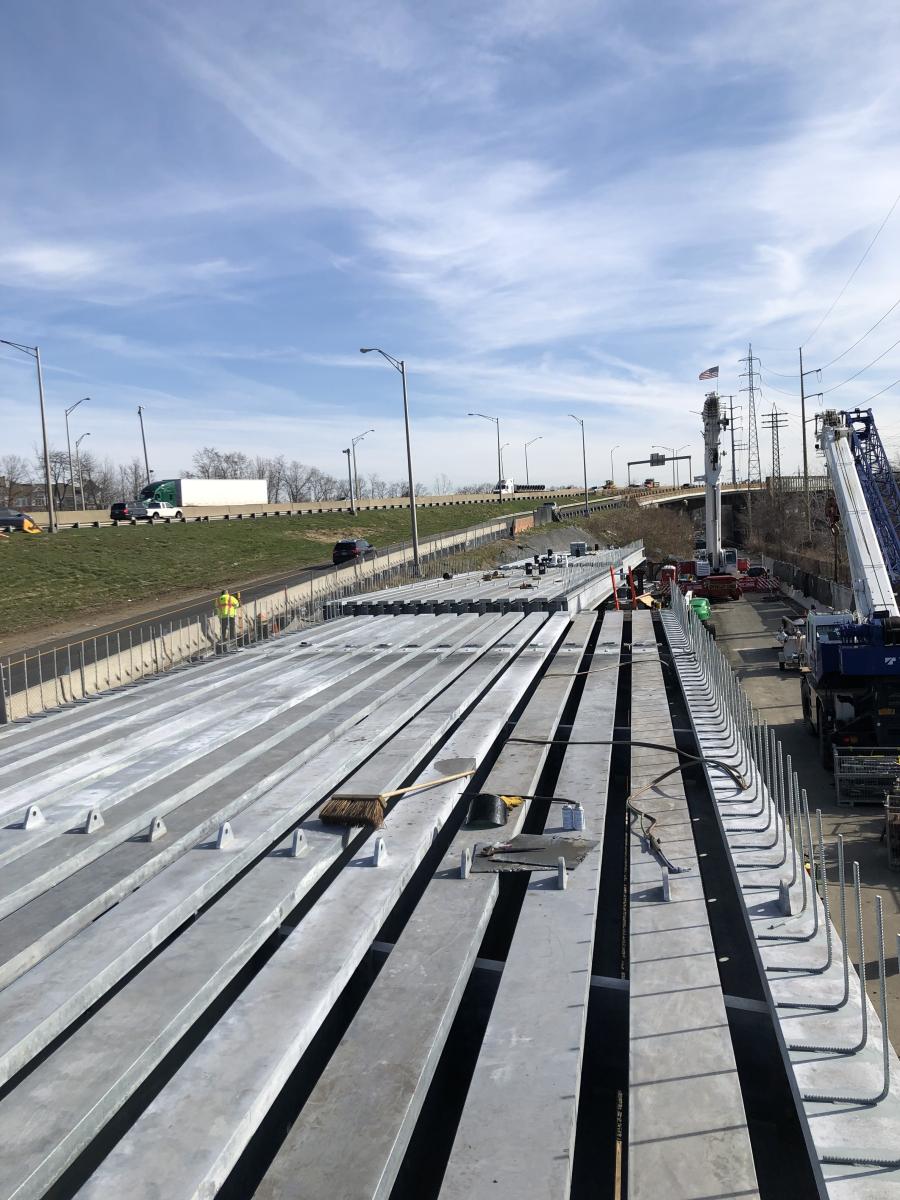 He said, "Phase 2, which began in June 2018, includes the replacement of the Atlantic Street Bridge and track and infrastructure improvements to the Stamford Train Station."

The highlight of the work on Phase 2 was the use of the Accelerated Bridge Construction method.

"ABC is when a bridge is built off-site and transported into location on designated time periods under certain contract requirements," Engen said. "Our job had six bridge spans that were installed using Self Propelled Modular Transporters (SMPT). Four bridges were built at the on-ramp to I-95 North at Elm and South State streets and two were built on Atlantic Street, just south of the new bridge location. We had nine days of partial track outages (June 28 to July 7, 2019) to demolish the old MNR bridge and slide the new bridges into location, all while maintaining two active railroad tracks for MNR. We had a $1 million incentive to have all five new train tracks operational by July 7 and finished six hours ahead of schedule. The new abutments and center pier were built prior to the nine-day outage."

Atane Consulting/Wethersfield, Conn., the firm that provided engineering services on the Atlantic Street bridge replacement, reported that the ABC method accelerates the process.

"With traditional construction, an undertaking of this magnitude would typically take years to complete. Commuters could expect major train disruption and access beneath the bridge would be closed for the entire duration of the project. ABC minimizes such inconveniences to months and, in some cases, days. Pedestrians and those traveling in the Stamford area have seen the new bridge taking shape in two off-site construction areas near the job site."

As Keven Conroy, an Atane Consulting engineer noted, "What makes the Atlantic Street Bridge a prime example of the benefits of accelerated bridge construction is the ability to preserve regular New Haven Line service for over 300 trains per day that pass through this critical switching point next to the busiest station on the line outside of Grand Central Terminal."

This project is the first use of the ABC method to replace an existing railroad bridge by MNR in Connecticut." 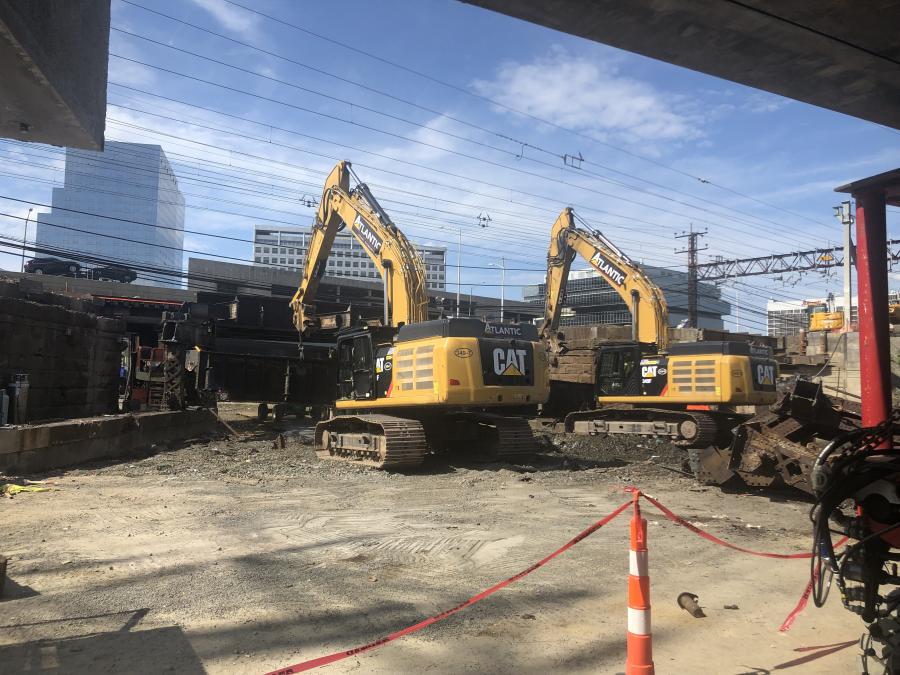 When asked how the demolition of the old bridge was completed before the ABC work began, Engen said, "The existing bridge was demolished inside our nine-day work window using large excavators and torching methods. Two live tracks were kept intact during demolition by temporary support of excavation methods. Once two of the six bridge spans were installed, train traffic was transferred to the new bridges. We then demolished the remainder of the existing bridge and installed the final four spans."

When asked if there were any complications with the job, Engen said, "One major obstacle was setting up a manpower schedule for nine-day outage. I wanted to be aggressive on the scheduling but also realistic so that all shifts were properly manned for all work operations. We decided to run with two 12-hour continuous shifts that were balanced to allow for any acceleration and/or deceleration in the schedule. Running two shifts allowed us to properly man the job and ultimately finish ahead of schedule to get our $1-million-dollar milestone."

CTDOT said the work on Phase 2 will be completed in November 2020.

"These collective improvements will improve surface traffic operational efficiencies, improve access to the South End neighborhoods and improve local and express train service with the addition of a dedicated Track #7, extended platform and dedicated stairway." 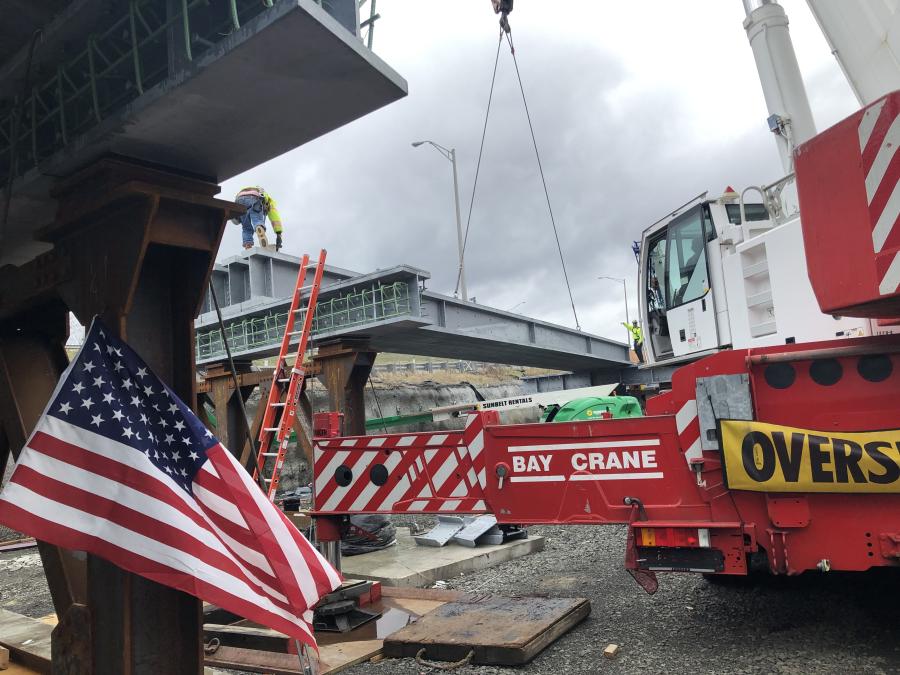 A number of streetscape design elements have been included in the Atlantic Street bridge replacement project, including decorative stamped asphalt red/white crosswalks at Atlantic/Dock streets and Atlantic/South State streets that create an integrated aesthetic to the pedestrian experience at this major Stamford gateway. The high visibility crosswalks provide a traffic calming effect along with a skid resistant surface. CEG