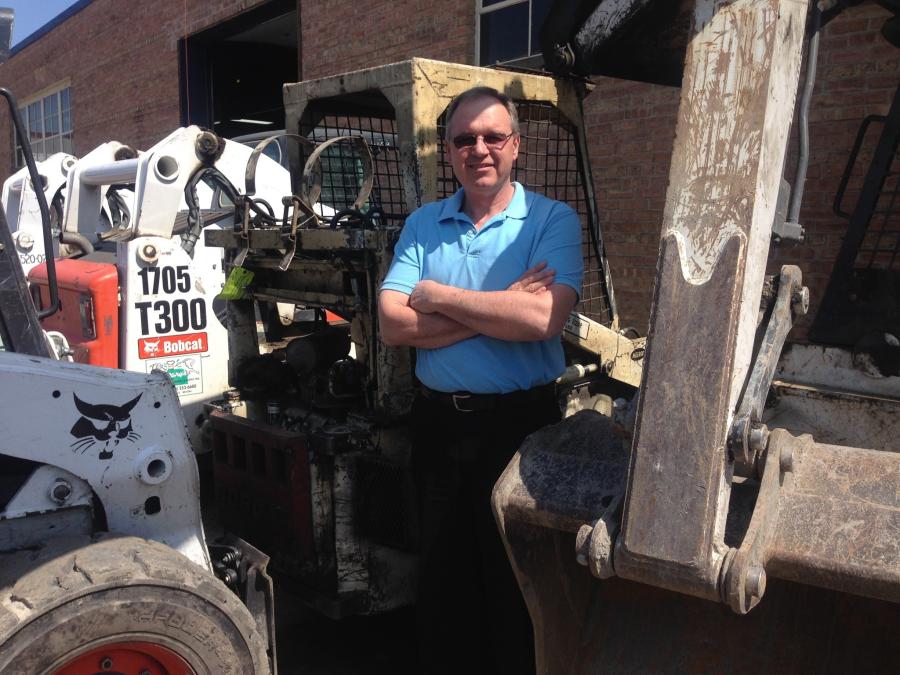 Bob Loula in front of an old M610 Bobcat that was in for repair. Loula originally sold this machine to this customer in 1979 and the customer is still using it!

Bob Loula started his career at Atlas Bobcat in Chicago as a part-time employee in the parts department in 1975. As he begins the newest chapter of his life — retirement — reflecting upon the early days is natural.

"I was going to go back to school for engineering," said Loula. "Then, I saw a little white machine in the backyard called a Bobcat. Nobody knew too much about it."

The then 20-year-old Loula realized what the salesmen were making selling the Bobcat line, which translated into more than an engineer. He decided to stick around, and not return to school.

"I was offered a position to run a small division at Atlas. It was the Cushman personnel carrier equipment line and the Advance Equipment Line of industrial floor scrubbers and sweepers," he said.

After running the department, he was offered a sales position to sell both Cushman and Advance lines.

Soon, Loula was offered the opportunity to shift over to sell the Bobcat line of equipment.

At the time, the owner of Atlas, Howard Bernstein, and president Harry Newton told Loula, "It's not that we're offering you the position. It is something that you have to earn. We feel you have gotten to that point where you can do it."

Loula was given a set of keys, a truck and a price book. Bernstein and Newton told him to "go out and get ‘em." That was the extent of his training.

According to Loula, he had to learn the hard way — the school of hard knocks — who to call on and how to sell the machine.

"When I first went out on Bobcat sales, I had no idea who to call on or where to call," Loula said. "I thought anybody with a shovel in their hand was a potential customer. One of my first stops was a guy turning over his garden. I went up to him and gave him the spiel about the Bobcat and what it can do for him. I'll never forget what he said to me, ‘Son, you're a nice young man. I'd love to have your product, but I'm just turning over my garden here. Sorry I can't use it.' That's a true story."

But Loula finally figured out the correct formula for selling. He was ranked among the top ten sellers in the nation often and was offered the sales manager position about a decade later. He was in charge of six sales people. Soon, he was promoted to vice president of sales and rentals, and later passed that torch to a very deserving individual, Matt Sobacki, as Loula moved on to become vice president of operations of Atlas Bobcat.

Loula has enjoyed working with John Johnson, executive vice president — "a great guy to work with" — and Al Rawson, CEO of the Atlas Companies, who began his career at Atlas about the same time as Loula.

When asked where he sees the industry of the future, Loula said, "I see the compact equipment industry continuing to grow. It's a labor-saving device that shows up to work every day and doesn't have workman's comp claims. Competition is fierce, like it has always been, but it's the dealership that separates competitors from one another. The one thing Atlas Bobcat has always prided itself on is ‘the customer comes first.' And people buy Atlas first and the product second."

Loula has lots of plans for his retirement, including spending a lot of time with his wife of 43 years, Brenda. They have a lake house in the Upper Peninsula of Michigan where their intent is to spend time with their kids and grandkids. They also plan to do a lot of traveling.

"I'd like to thank Atlas Bobcat for 44 years of employment," said Loula. "It was a great run. It was a great time to be able to grow a product into the company it is today. I'd also like to thank Doosan Bobcat, for all the opportunities over the years to handle their product in the Chicago area." CEG