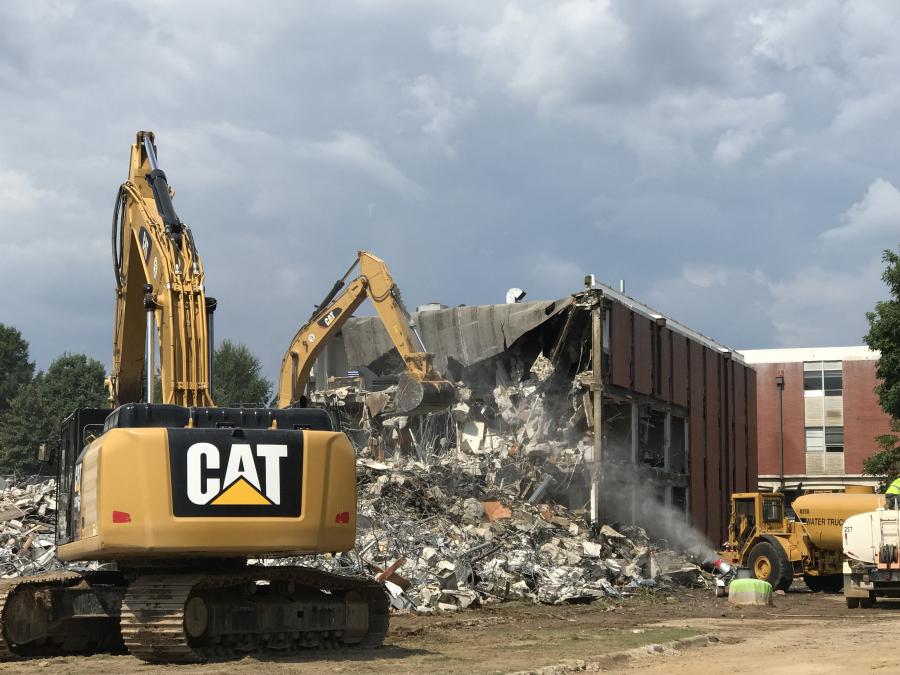 "The ACLC is needed to update and replace an aging classroom and instructional laboratory stock that cannot address the need for active student learning in today's educational environment," said campus architect Brad Prater. "It will serve the entire campus, and it's anticipated that every Auburn student in the near future will have a class in it at some point.

"The ACLC will stand out because it will provide a variety of learning environments — traditional auditoria, lecture halls, biology and geology labs and active learning classrooms. It will also stand out because of its goal to continue the educational dialogue outside the classroom by creating various rooms and areas for students to study, break out for small group discussions or talk to their instructors." 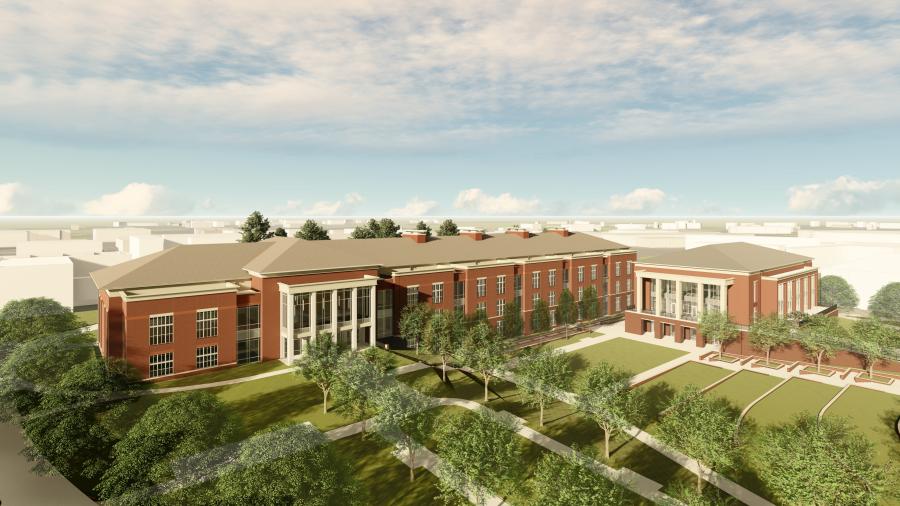 The ACLC includes a partial basement and two levels above. The architectural style is a contemporary interpretation of Auburn's traditional Georgian architecture. Sustainability was at the forefront of the design, with the intent of achieving a LEED Silver rating.

"Some specific sustainable design elements are the incorporation of rainwater cistern, as a bid alternate, and the harvesting and milling of trees that were removed from the site and will be reused in the building for decorative purposes," Prater said. "I expect the students will be extremely excited to have class in a new, modern, light-filled building."

Rabren General Contractors is overseeing the project, which is still in the early stages of installing storm and domestic water lines and electrical conduit.

"ACLC Phase I may appear to be a routine demolition and utility project, however, there are some challenges that make this work unique," said Rabren project manager Lindsey Smith, EI, LEED AP. "Allison Laboratory was originally built in 1963 and is 37,000 sq. ft. spread over three floors. Allison Laboratory had to be abated and demolished before some of the major utility work could begin beneath its former footprint."

Allison Lab was connected to an operational classroom building, Parker Hall, prior to demolition. The teardown was carefully scheduled between the summer and fall semesters to reduce the impact on active classrooms and learning spaces. All utility work for the project has to be carefully phased, as well. 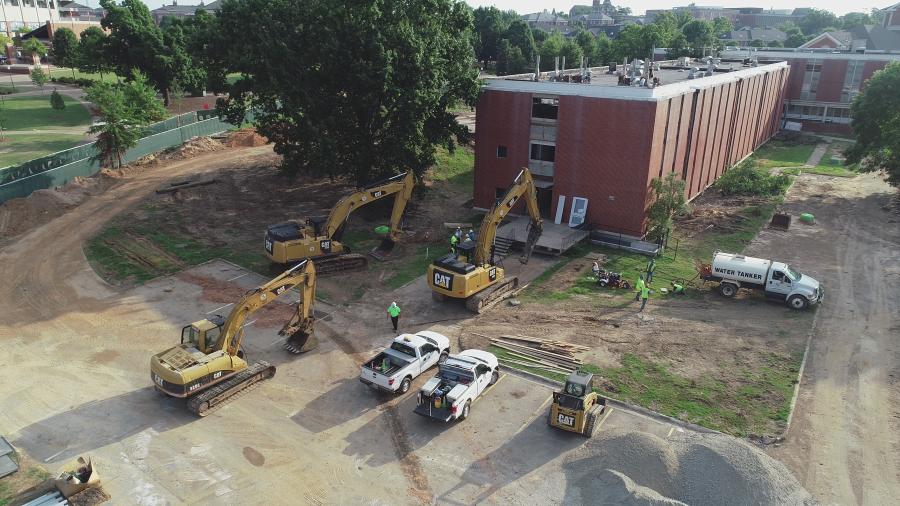 "Over 10,000 linear feet of known existing utilities are scheduled to be removed," Smith stated. "Close partnering between the general contractor and the university's utility division is required to ensure that adjacent buildings do not face unscheduled outages of any key utilities.

"The existing utilities that run through the site were installed in various phases over the last 50 years. The exact location, size and extent of many of these existing utilities are unknown as they were installed at a time when electronic as-builts at GPS locating practices were not available. Existing conditions are often vastly different than what was expected, causing the entire team to meet to develop solutions."

So far, 21 existing pine trees have been harvested from the site and sent to be milled into wood products that will be reused in the final buildings. The temporary and permanent re-feeds of chilled water, gas, power and domestic water to adjacent buildings have also been completed. This allows existing utilities within the site to be demolished to make way for the new buildings and utilities. Because construction of the ACLC building could not take place until after Allison Laboratory was brought down, having everything in place for the teardown was critical.

The demolition of the building took just three days to complete. A Cat 336E started the demolition by carefully peeling back the brick skin of the building to expose the main structure. A Cat 349F hydraulic excavator was used to demolish the main building structure. A Cat 336F was outfitted with a Cat H160E hydraulic hammer to strategically weaken columns and later help separate metal reinforcement from the concrete structure. Dust and silica control from the demolition was supported by two 1,000-gallon water trucks, hoses and a Buffalo Turbine mister, which were used continuously during demo and sorting activities. 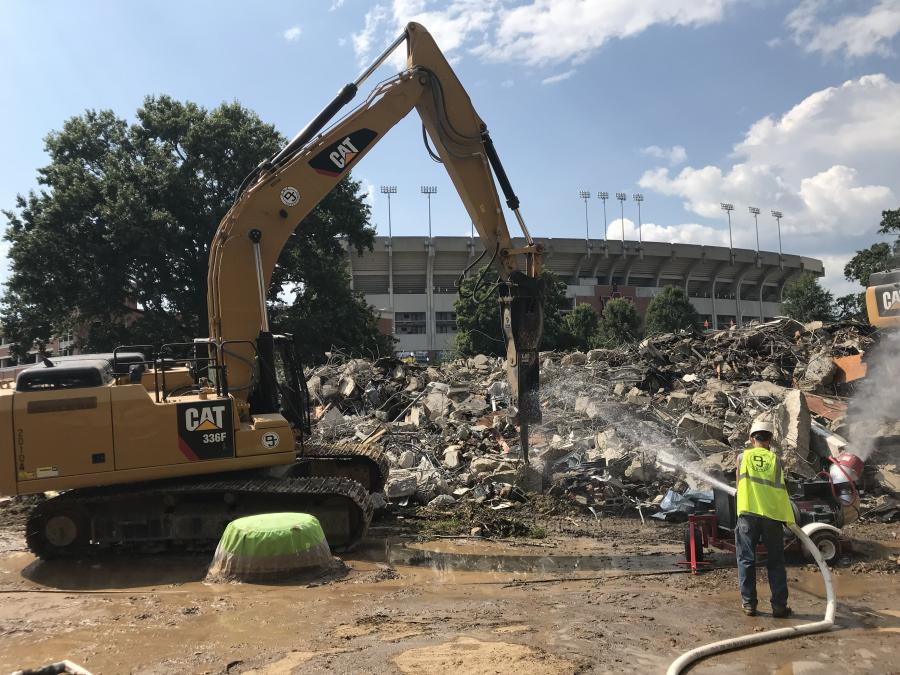 "Once the building was down, debris was carefully broken down and sorted on site, so that the various building components could be recycled," Smith said. "This sorting process took just over two weeks to complete and resulted in 80 percent of the building weight being recycled and diverted from landfills. Over 300 trucks hauled the sorted building components to various sites around Auburn."

Regarding current construction, which includes the installation of storm and domestic water lines and electrical conduits, Smith explained that Storm–Parkinson's Mill Creek, a carefully protected and monitored Auburn waterway, runs beneath the site. The new storm system consists of 72-in. diameter concrete pipe and large storm detention system to support the flow of water. The detention system consists of 228 linear ft. of 8 ft. x 6 ft. box culverts. More than 1,000 linear ft. of additional reinforced concrete pipe will be installed to control stormwater runoff throughout the project.

"A new six-line electrical duct bank system with manholes and electrical vaults encircles the site," Smith explained. "These manholes weigh over 32,000 lbs. each and come in two pieces. Depending on adjacent conditions and proximity of access for cranes, up to a 40-ton crawler will be mobilized to support the setting of these manhole structures."

In addition, more than 500 linear ft. of new domestic water lines will tie onto existing mains and be routed through the site. The sanitary sewer system consists of more than 1,200 linear ft. of ductile iron pipe that has to be carefully sequenced for installation and coordinated with existing lines to keep the active sewer system operational. 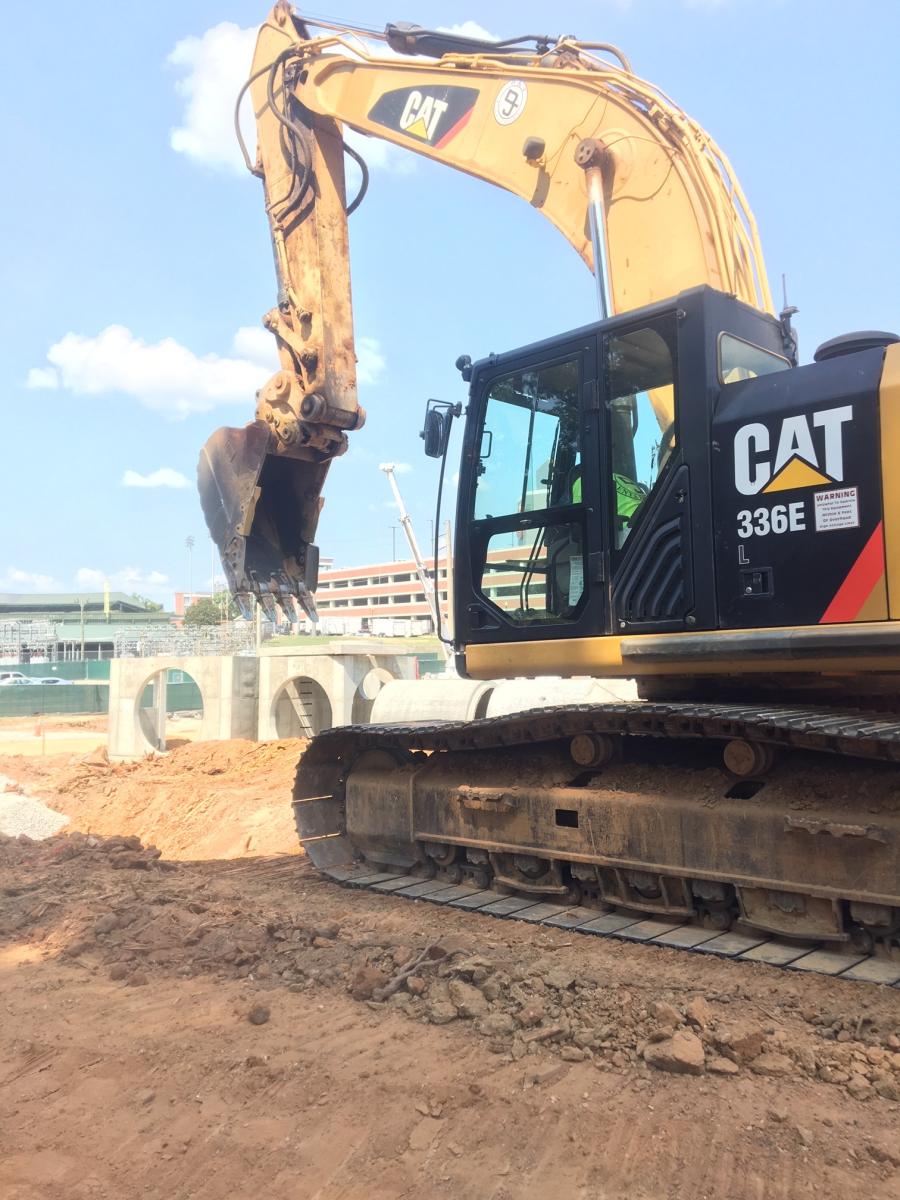 Equipment required to complete the ACLC project includes Cat 349 and Cat 345 trackhoes and Cat rubber tire loaders that will be used to install the storm and sanitary system, as well as to complete the extensive grading on the project.

"Due to the majority of Phase I work being outdoors and exposed to the weather, heavy and frequent summer rains have slowed the site work and utility work, at times," Smith said. "Dewatering is performed as required to get crews back up and running as quickly as possible. June, July and August have all resulted in rain days above the average for this season."

Efforts also have been taken to keep students, the public and work crews safe during construction.

"The ACLC Phase I project is located in the heart of Auburn University's campus, adjacent to the football stadium, classroom buildings and just a short distance from student dormitories," Smith said. "In lieu of a temporary construction fence anchored with spread feet and sandbags, a permanent fencing system over 2,000 feet in length with ground driven posts was provided to create a safe and lasting separation between the public and construction activities.

"A full-time flagman carefully coordinates construction access with the continuous stream of vehicle and pedestrian traffic that passes by the site's main entrance off Duncan Drive. OSHA was invited to visit the ACLC Phase I project early on to partner with the construction team during a safety stand down. This allowed everyone performing underground utilities to discuss trenching and excavation safety, prior to starting these critical activities."

A total of 19,300 cu. yds. of earth will be moved, with 10,500 cu. yds. being removed from the project site. In some areas, the existing grade will change by more than 14 ft. to accommodate a future basement in the academic classroom building.

The adaptable classroom/laboratories will provide spaces that can operate as either a laboratory or a classroom. The new complex will increase the amount of EASL space on campus by 40 percent and offer the second largest collection of instructional space on campus.

"The day this project is completed, it will contain the second-largest amount of instructional classrooms and laboratories on campus, second only to the Haley Center," Auburn associate vice president for facilities management Dan King stated in a news release. "In planning this important facility, the thought was that it needed to be centrally located, particularly near the transit hub and the student center. Given the deteriorated state of Parker and Allison, we knew those facilities had to be replaced, so siting the ACLC on that location met all the key criteria."

Work on the new building should be finished by summer 2021. Upon completion of the new ACLC structure, Parker Hall will be torn down. Demolition is scheduled to be completed by spring 2022. CEG