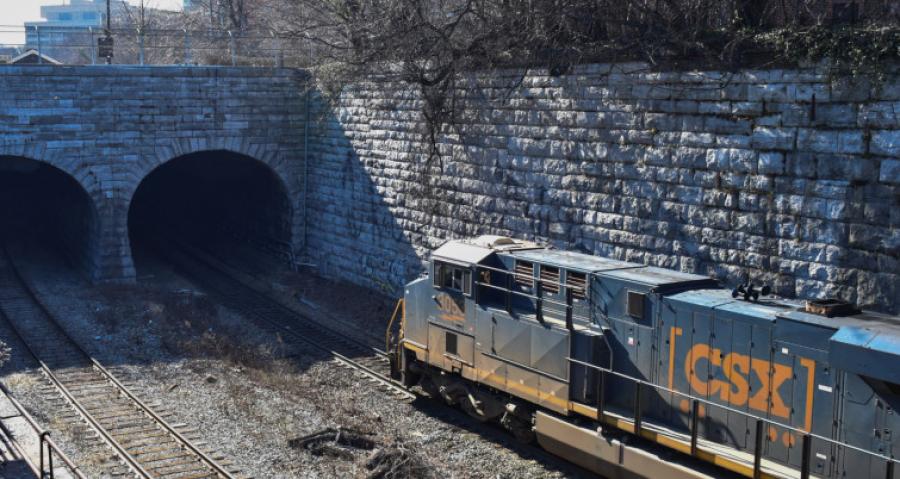 Maryland officials have been pushing for years to increase the height of the 126-year-old Howard Street tunnel to allow for double-stacking of containers on trains traveling to and from the Port of Baltimore.

Shovels could go into the ground this summer or early fall as CSX Corp.'s long-awaited reconstruction of the Howard Street Tunnel in Baltimore continues to inch toward becoming reality.

Maryland officials have been pushing for years to increase the height of the 126-year-old tunnel to allow for double-stacking of containers on trains traveling to and from the Port of Baltimore. Double stacking will enable the fast-growing Port of Baltimore to further increase container capacity and become more competitive, since it is already further inland than other ports.

"Having double-stack capabilities at the Howard Street Tunnel is mission critical for the Port of Baltimore," Maryland Port Administration (MPA) Executive Director William P. Doyle said in a statement. "The Howard Street Tunnel will seamlessly complement our e-commerce capabilities and the ability to double-stack trains will open up opportunities for more business to the Midwest markets and grow jobs at the port."

The $466 million project will be completed in a public-private partnership with CSX Corp., the Jacksonville, Fla.-based railroad company that owns the tunnel. CSX has committed $113 million and will oversee construction. The Federal Railroad Administration (FRA) will provide a $125 million grant and the state will finance $202.5 million through various funding sources. In addition, Pennsylvania is providing $22.5 million and $3 million will come from the federal government's highway funding formula.

The grant agreement with the feds will be executed upon completion of the environmental review process. Brad Smith, general manager of strategic initiatives of the MPA, said he expects the FRA to approve the project in the spring following a 30-day public comment period on the assessment that began March 15. The MPA also will finalize a separate agreement with CSX.

"Our target date for execution of those documents is July 1," Smith said. "With the [approval and agreements] in place, CSX will be able to finalize engineering, obtain permits and advance construction. CSX expects to begin construction in phases later in 2021."

The 70-page environmental assessment and hundreds of additional pages in attached appendices offer a trove of information about how the tunnel's reconstruction will impact the Baltimore region.

According to the report, the project will not negatively impact air quality, water quality, wetlands, floodplains or other environmental resources. However, several bridges and buildings considered historic properties will be adversely affected. The properties impacted include the Rombro building located at 22-24 S. Howard St.; the Cannon Shoe Co. building at 1303 W. Mount Royal Ave.; the North Avenue Bridge; the Guilford Avenue Bridge; and a bridge running along Harford Road.

The bridge near Harford Road and East 25th Street (separate from the one being replaced by the city further up Harford Road over Herring Run), would be replaced while other bridges would be modified, according to the report.

Smith described the overall environmental impact from the project as "minor."

From an economic standpoint, officials view the impact of reconstructing the tunnel as anything but minor. Over 30 years, reconstruction of the tunnel will yield more than $532 million in benefits, according to a socioeconomic analysis in the report.

"The Howard Street Tunnel project highlights how critical infrastructure investments can benefit the entire region," Maryland Transportation Secretary Greg Slater said in a statement. "This partnership between state, local and federal agencies and the private sector will enhance the regional supply chain and allow the port to deliver ship-to-front door service. The result will be more jobs, an increase in port capacity and a significant boost to the state economy."

During the design and construction phase of the project, an estimated 6,859 jobs will be created with $392 million in associated employee compensation.

After construction is completed, which officials expect to happen in 2024, the newly reconstructed tunnel will result in 7,872 net new jobs in the transportation sector, which are linked to more than 60,000 jobs in the Baltimore region supported by companies that use the port, according to the report. The created and supported jobs translate into an expenditure of approximately $6,500 per job.