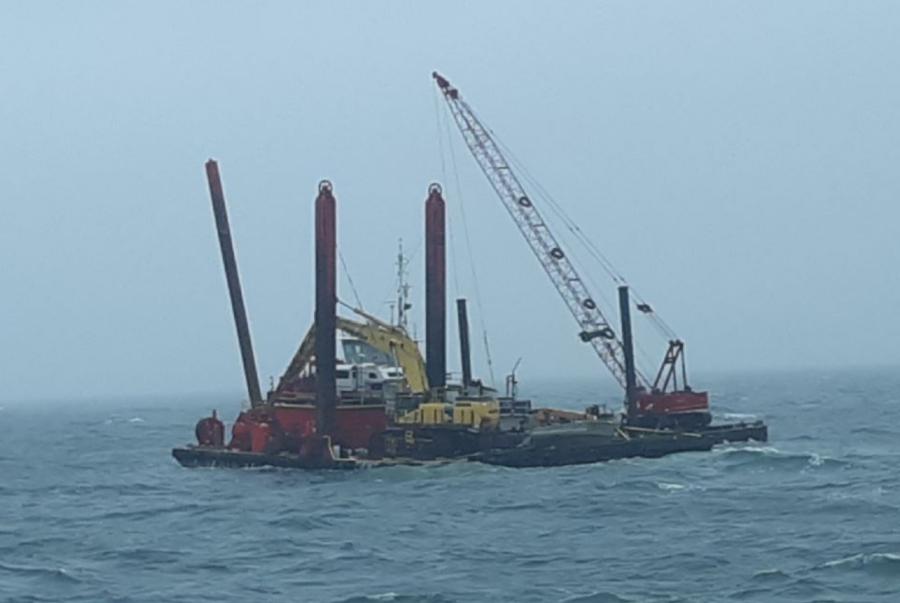 The barge, which was heading to a dredging project site, was carrying construction equipment that cumulatively held a maximum of 500 gallons of diesel fuel and 400 gallons of hydraulic oil (Coast Guard photo)

The Coast Guard and partner agencies located the missing barge, Dredge 200, Dec. 5, 2018, after it capsized and sank earlier this week in Broad Sound approximately two miles southeast of Nahant, Mass.

The barge's location was confirmed by a contracted company using multi-beam sonar just north of the North Channel, the major shipping lane into Boston Harbor, in approximately 100 ft. of water.

The captain of tug boat Big Jake notified the Coast Guard at approximately 9:30 a.m. on Sunday, Dec. 2, that two of five barges they were towing had broken free and were adrift.

The barge, which was heading to a dredging project site, was carrying construction equipment that cumulatively held a maximum of 500 gallons of diesel fuel and 400 gallons of hydraulic oil.

Close coordination with the Boston Harbor Pilots was crucial to ensure maritime commerce impacts were limited and deep draft vessels carrying vital goods were able to safely transit into Boston.

Tuesday, Dec. 4, the crew on the Quincy Police boat Guardian located an anomaly with their side-scan sonar equipment consistent with the characteristics of the sunken barge.

"I am grateful for the rapid and sustained support of our partner agencies," said Capt. Eric Doucette, Sector Boston commander. "Search conditions were not ideal, but the expert operators and boat handlers of the Massachusetts State Police, Massachusetts Environmental Police, and Quincy Police were still able to accomplish great things."

Contractors are scheduled to soon send a remotely operated underwater vehicle to further inspect and verify the condition of the barge and mark its location.