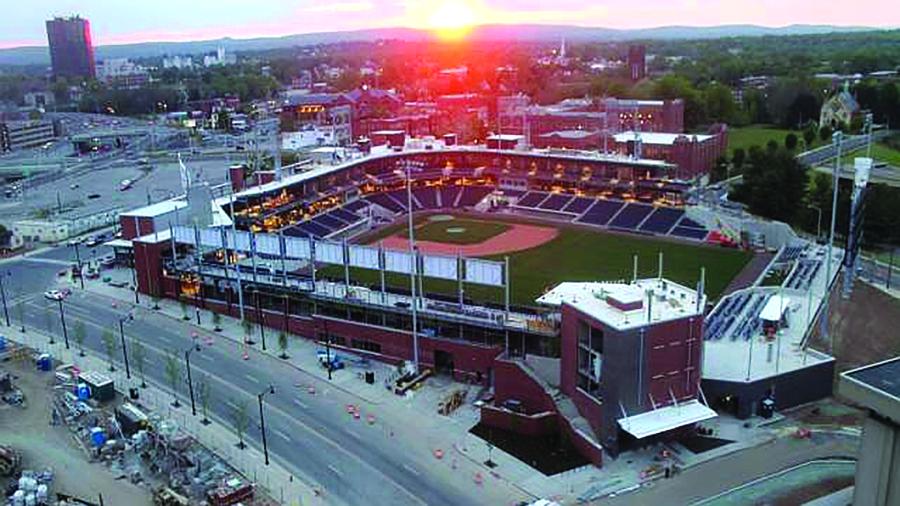 The Yard Goats are expected to play 70 home games at Dunkin’ Donuts Park in 2017.

Hartford's minor league baseball team showed off its new $71 million baseball stadium after a year of setbacks and construction delays.

Officials say Dunkin' Donuts Park, which was supposed to open last April, was ready for fans when the Double-A Hartford Yard Goats took on the New Hampshire Fisher Cats on April 13.

The team, an affiliate of the Colorado Rockies, moved to Hartford from nearby New Britain, where it played through the 2015 season as the Rock Cats.

The team was forced to play its games on the road last year when construction delays caused the stadium's opening to be pushed back numerous times. The city eventually fired the developer, leading to an insurance investigation, litigation and more delays.

Work resumed on the park in October after an agreement was reached with the insurance company and a new developer was hired.

"There is a sense of relief," said Mike Abramson, the team's assistant general manager. "We took our lumps, and it was challenging. But the fans are going to see a complete ballpark. Everything is going to be done."

The stadium, which originally had been projected to cost $55 million, has 6,000 seats, with a capacity for 8,000 fans. It includes 18 luxury suites and two other suites adjacent to the dugouts.

It also will have some unusual amenities such as a barbershop, a shoe shine station and a glassed-in batting cage, which will allow fans with premium tickets to watch the players practice.

"We also have a kids' fun zone beyond center field, where kids can jump in the bounce house while the parents can actually stand and watch the game," Abramson said.

City officials said they expect to lose money on the stadium project for at least two years, with construction payments and security costs outweighing ticket sales and other revenue.

There also was supposed to be related retail development around the stadium, which is still caught up in the litigation surrounding the original developer.

The Yard Goats are expected to play 70 home games at Dunkin' Donuts Park in 2017.