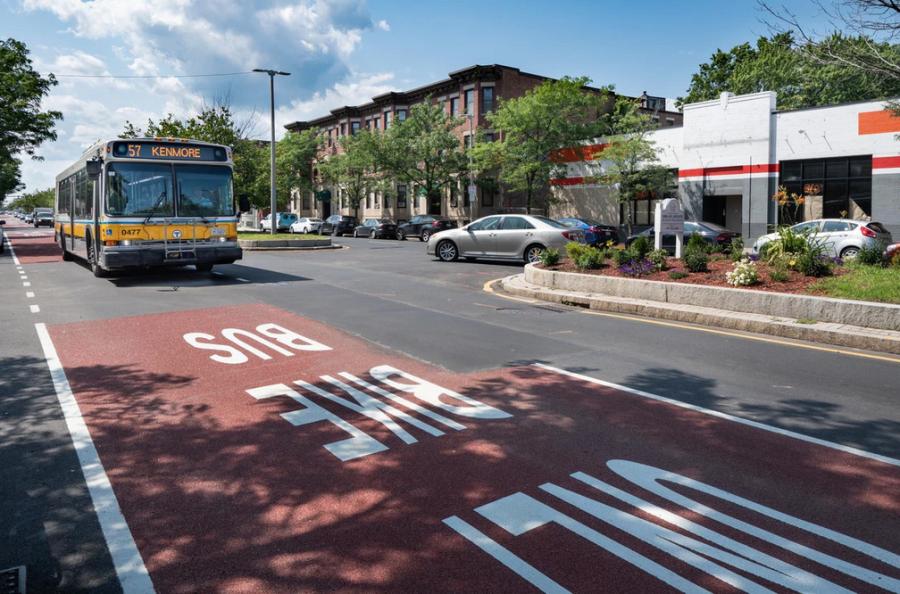 The MBTA is partnering with many cities and towns over the next year to advance projects that make regional roadways more reliable for tens of thousands of daily bus riders. (MBTA photo)

The agency's partners are the Metropolitan Area Planning Council (MAPC), the Massachusetts Department of Transportation (MassDOT) and Massachusetts Port Authority (Massport), along with the city of Boston and 12 other municipalities in the metropolitan area.

The other cities and towns participating in the agreement include Cambridge, Somerville, Brookline, Everett, Watertown, Quincy, Chelsea, Revere, Medford, Malden, Arlington and Lynn.

This collective procurement effort will allow public transportation agencies to cooperate and achieve a greater economy of scale in building projects, ultimately bringing costs down.

"This is another example of the region working together to move everyone forward. Increasingly, we all need to collaborate in new ways to better serve our riders and constituents," explained MBTA General Manager Steve Poftak. "This agreement will ensure that public agencies like the MBTA will be using their funds as cost effectively as possible, especially throughout the current public health and economic crisis."

MAPC Transportation Director Eric Bourassa said, "Establishing more bus and bike lanes is critical for the region as we continue to re-open the economy during this pandemic. By reducing costs for the MBTA, as well as cities and towns, we can stretch our public dollars further to make public transit and cycling better and safer."

MBTA said the winning bid from K5 Construction — $4.70 per square foot for red bus lane material — is competitive and will aid an unprecedented expansion in multimodal projects at a critical time. Previous costs ranged from $7 to $12 per square foot, depending on the municipality.

Combined, the participating municipalities represent more than one-fifth of the Commonwealth's total population and account for most major regional transit corridors in the metropolitan region.

Based on past construction costs across the region and projected project budgets, the MBTA said it estimates that this joint procurement effort could save taxpayers more than $2 million next year, or about 10 percent of what the MBTA plans to spend on the Rapid Response Bus Lanes Program. Additional savings are expected if the procurement is renewed for future years and potentially expanded to more municipalities.

As Massachusetts municipalities have implemented more quick-build design solutions like bus and bike lanes through road markings, flex posts, and signage in recent years, costs have remained a barrier for some localities, according to MBTA.

The agency is partnering with some of the same cities and towns over the next year to advance projects that make regional roadways more reliable for tens of thousands of daily bus riders. The MBTA and the cities of Boston, Somerville, Everett and Chelsea previously announced several projects to be implemented by spring 2021, adding up to 14 new miles of bus-only infrastructure for routes with some of the highest ridership since the pandemic began.

For many projects that include transit priority measures, the MBTA provides funding for design costs and for bus lanes' red paint while the municipality pays for other multimodal corridor improvements.