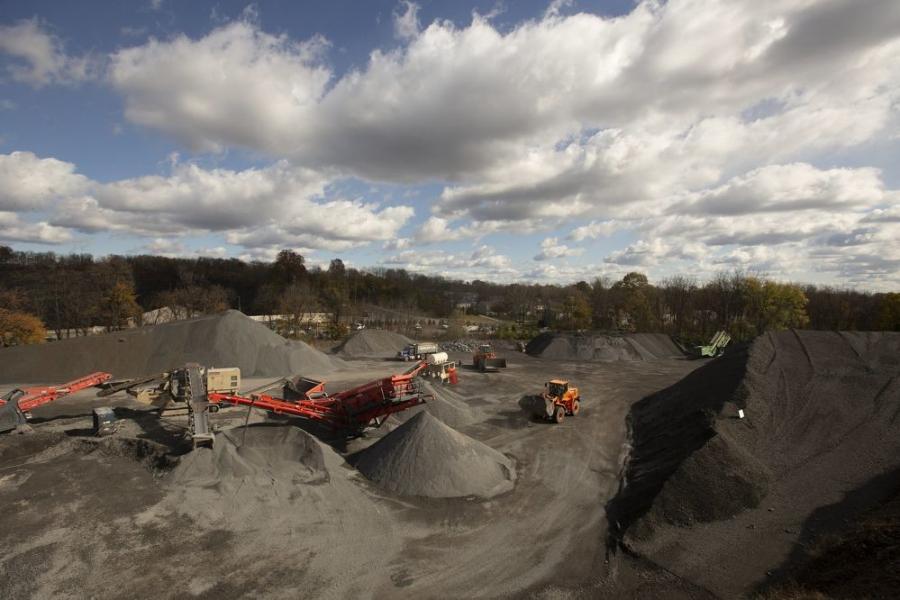 Best Line Equipment has sold 16 Doosan machines in all to Ratoskey & Trainor, including a DL550-3 wheel loader, two DX180LC-3 crawler excavators and a DX80R mini-excavator.

Of all the work Ray Trainor oversees — the drill blasting, the demolition, the recycling and excavating — one task never strays far from his mind: remaining a good neighbor.

Set in a neighborhood northwest of Philadelphia, Trainor's company, Gill Quarries, mines six days a week while churning out recycled concrete, cut stone, rock products and more. Surrounded by rows of suburban homes, the quarry always shuts down by 4 p.m., and teams try to limit the digging on weekends.

"Our quarry is in a residential area," Trainor said. "We have to be very mindful of the people around us."

But there's always more to do. Staying on top of demand is the biggest challenge for Trainor and his partner, Rob Ratoskey. The two also run a construction firm, Ratoskey & Trainor, requiring them to make the most of every daylight hour. And that requires a diverse mix of equipment for their equally diverse work.

From Construction to Quarry

The quarry business came later for Ratoskey and Trainor. The two launched Ratoskey & Trainor nearly 30 years ago with a focus on demo work. That inspired the purchase of a concrete recycling machine which, along with a concrete crusher, led the pair to start a recycled concrete business alongside the razing.

All that set the stage for a move into mining. When a nearby quarry became available for purchase in 2016, Trainor said, they chose to "keep on building and growing." 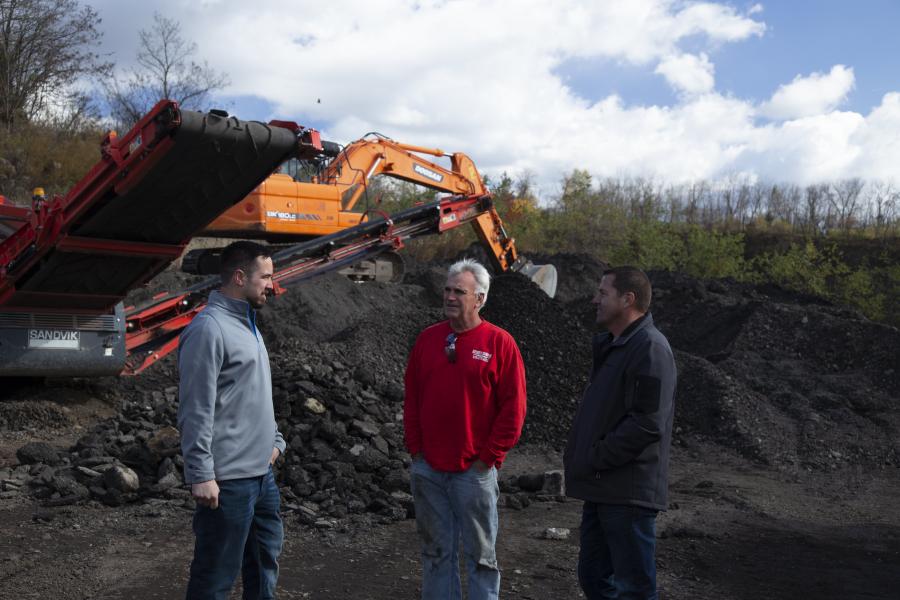 This partnership started far from home, though, at a job site in Delaware. A recycling firm years ago hired Ratoskey & Trainor for a job there, where Trainor spotted an orange wheel loader. He hopped inside and liked what he found.

When Trainor asked the machine's owner who sold it to him, he heard a familiar name: Armand Cencetti. Trainor remembered the name: Armand had been by his yard before so Trainor called him and had a Doosan wheel loader brought out the next day.

But the big business came with the quarry.

"That's when they got their DX420LC-5, DX350LC-5 and the DA30-5 trucks," Cencetti said. "Previously, I was selling them more DL250s, DX180LCs and DX225LCs. They definitely went to large-frame equipment when they bought the new property. Best Line Equipment has sold 16 Doosan machines in all to Ratoskey & Trainor, including a DL550-3 wheel loader, two DX180LC-3 crawler excavators and a DX80R mini-excavator. The company's fleet is now 90 percent orange."

Productivity In The Pit

Trainor and Ratoskey's quarry contains argillite, a sedimentary rock used to make highways. And getting it from the ground takes a slew of heavy equipment. It starts with a bang as a controlled explosion in the quarry breaks the stone into manageable chunks. 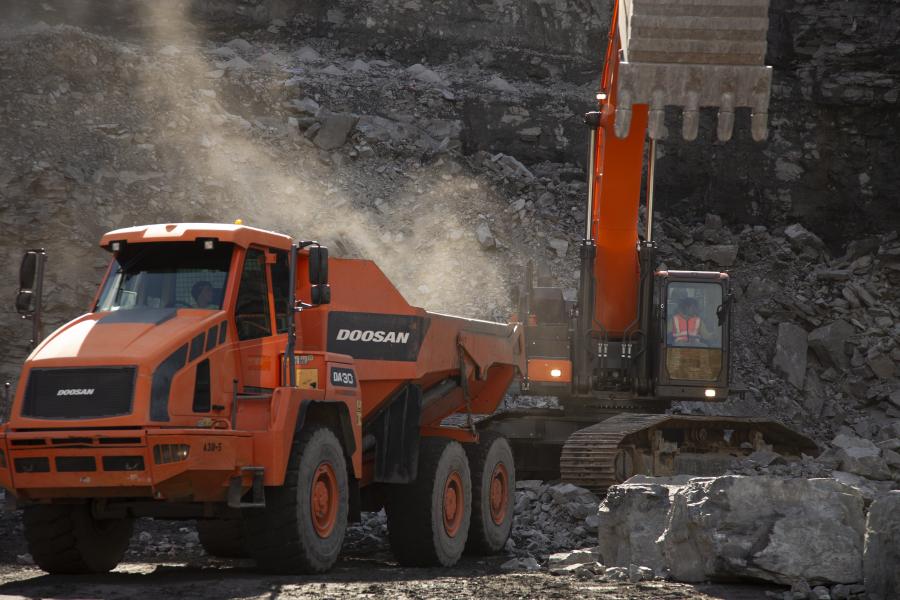 Then, at the quarry floor, DX350LC-5 excavators with hydraulic breakers split up any larger rocks. Wheel loaders place the stone inside DA30-5 articulated dump trucks (ADTs) to transport it topside.

Once out of the quarry, a DX225LC-3 excavator dumps the stone into a crusher. Excavators both bigger and smaller are available for the job, such as the DX300LC-3 and DX180LC-3, but the mid-sized DX225LC-3 fits the bill perfectly, Trainor explained.

"If we use the giant machine, you'd put one giant scoop in it and then you'd be sitting there for 10 minutes until the crusher did its business," Trainor said.

The DX225LC-3, however, "is the exact size for the reach and to handle what the bucket can hold."

The excavator comes in handy later, too. When the crusher shuts down, Trainor's crew attaches a breaker to it to let the machine slam away on materials.

The crushed stone then gets mechanically screened into sizes approved for road construction by the Pennsylvania Department of Transportation. One size goes into highways. Another ends up beneath concrete. One fine grade is purchased for underground gas lines.

For maximum savings, Trainor's heavy machines run mostly in eco-mode — even the articulated dump trucks hauling tons of argillite. Unless an operation like hammering requires the extra oomph, Trainor said, he'd always rather save fuel.

"There's a definite, noticeable fuel savings in eco with loading the crushers every day," Trainor explained. "You're loading, and it's all loose material so you don't really need all that power."

Beyond saving fuel, the firm also saves concrete from sanitary landfills. The recycling business at Gill Quarries has grown exponentially over the past few years, a trend Trainor sees continuing.

"Our quarry might have 800,000 to a million tons of reserve, so eventually recycling will be a lot larger part of the day-to-day operation of the quarry," he explained.

In its early days, Ratoskey and Trainor's team would sell about 100 tons of recycled materials each week. That number's now up to 1,000 tons a week. The recycled material can be used the same way as virgin material.

"It's really catching on," Trainor said. "Eventually all we will sell as an aggregate is recycled material."

Ready for the Future

As business partners, Ratoskey and Trainor have stayed open to change. In the early years, their business centered on residential jobs: demolishing houses, digging basements, septic and storm work — whatever needed doing.

Now, with the quarry operation and booming recycling work, the two remain open to whatever's next. Trainor and Ratoskey employ around 40 workers between both businesses, taking crews throughout Pennsylvania and beyond.

"Wherever our customer base sends us, if we can go and help, we do," Trainor said.

Rob Ratoskey and Ray Trainor keep their Doosan dealer up to speed about their growing fleet needs. In fact, Best Line Equipment Sales Manager Armand Cencetti knows Ratoskey and Trainor's business so well that he occasionally drops off a machine for them to demo unprompted. It's almost always a hit. "It seems like whenever he sends something, it never goes [back]," Trainor said. And the benefits of a tight-knit dealer relationship show up elsewhere, too, he said, including in service and repairs. "Everything they've ever said to me, I pretty much could take it to the bank."

(This story was reprinted with permission from DoMORE Magazine summer 2020 issue.)