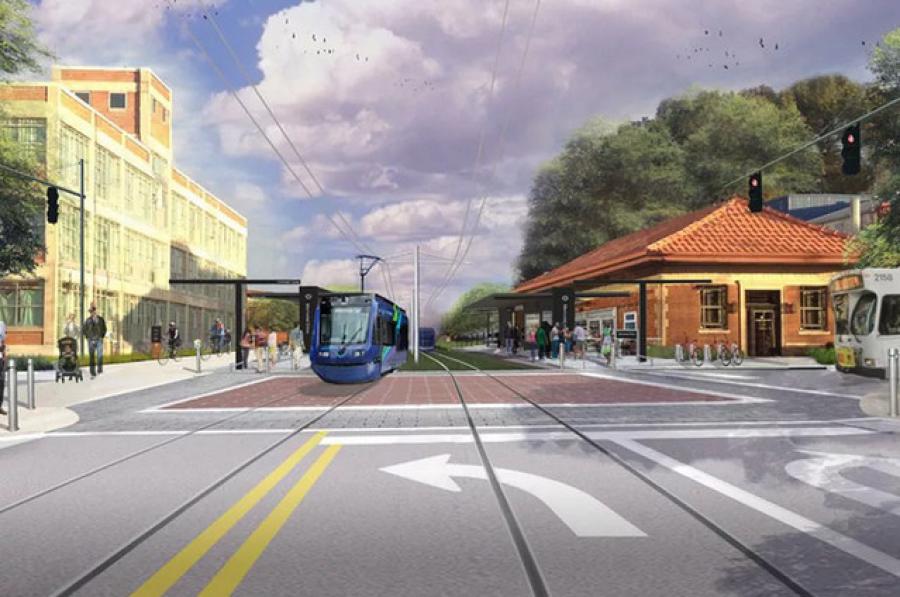 An early concept for how rail might function where a now-finished Eastside Trail meets Memorial Drive. (Atlanta Beltline rendering)

Transit advocates have a new plan to speed up construction of the Atlanta Beltline. Now they need to persuade everyone from the Metropolitan Atlanta Rapid Transit Authority (MARTA) and the Atlanta City Council to state and federal officials to get on board.

The group Beltline Rail Now said its $2.5 billion plan would allow construction of the 22-mi. light rail loop in a decade. MARTA's current plan calls for completion of just 15 mi. of the loop by the 2040s.

In a written statement, MARTA welcomed the proposal but called it "less a blueprint for funding and more a wish list."

The plan's supporters hope it will spark a serious discussion of ways to speed construction of a project that has already been 20 years in the making and would languish for decades longer under current funding scenarios. They plan to make it an issue in this year's Atlanta mayoral and City Council races.

"This is the first [recent] era where you can run for office without ever mentioning the Beltline," said Matthew Rao, co-chair of Beltline Rail Now.

"We intend to change that," Co-Chair Patty Durand added.

The Atlanta Beltline has been a fixture of city politics since it emerged from planner Ryan Gravel's master's thesis in 1999. He proposed converting abandoned rail lines circling the heart of Atlanta into a transit line and pedestrian trail network that would spark redevelopment and improve the lives of rich and poor people alike.

Large sections of the trail have already been developed, and it has sparked development. But the transit — which advocates said is key to promoting affordable housing and other aspects of Gravel's vision — exists only on paper.

Two years ago, MARTA approved plans to build 15 mi. of Beltline transit with part of the proceeds from a 2016 sales tax approved by city voters. But there is no timetable for completing the full 22-mi. loop.

MARTA said the sales tax money is not enough to build all the transit lines Atlanta residents say they want. Projects in the agency's plan also include a bus rapid transit network, light rail or bus rapid transit along Campbellton Road and rail along the Clifton Corridor.

But Beltline Rail Now has a plan it is confident would speed up construction. It outlines numerous funding sources, including $750 million in federal New Starts transit funding — nearly triple the amount MARTA expects to receive for the Beltline, and $250 million in federal highway funds. Such monies can be used for transit projects, though Georgia has used them only for highway construction.

Beltline Rail Now also believes Georgia should spend more state money on highway construction while using the federal funds for transit, a plan that would require support from state officials. It also advocates for hundreds of millions of dollars from local funding sources, which would pay for a new transportation improvement district along the Beltline ($400 million), new special assessment districts surrounding infill transit stations ($100 million) and an existing tax allocation district ($250 million).

The group's proposal also calls for using $150 million from Atlanta's special local option sales tax for transportation and it notes MARTA could get $600 million in federal loans by leveraging some of the money from the 2016 sales tax.

The plan cites numerous cities — including Los Angeles, Seattle and Washington, D.C. — that have used such funding sources to expand transit.

In January, the Atlanta Beltline — the agency that oversees the project — announced plans for a new taxing district to pay for the completion of the trail. Beltline Rail Now opposes that plan because it contains no funding for transit.

In its statement, MARTA said it "wholeheartedly agrees" that new revenue sources are needed.

"Development impact fees, parking fees and value capture are all tools that MARTA believes must be brought to the funding table," the agency said. "Sales tax revenue is simply not enough."

But the agency said the advocates' plan would require eliminating the Clifton Corridor and Campbellton Road transit lines to redirect resources to the Beltline. Among other things, MARTA said the proposal also "glosses over steep legislative and policy hurdles at the local, regional and state level that must be addressed in order to unlock the proposed new funding sources."

Rao and Durand acknowledged that their plan may not be the solution, but they said they will challenge naysayers to specify how they will speed up construction of the Beltline. And they will endorse or oppose candidates for city office based on their answers.

"The reason we wrote this [plan] was to dispel the argument that there isn't enough money to pay for the complete project of rail along the Beltline," Rao said.