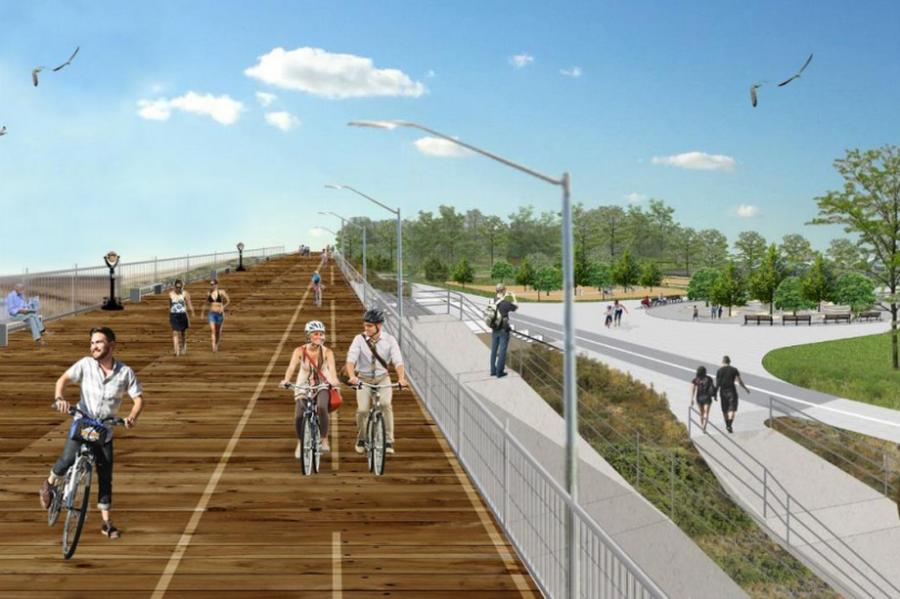 Days after a visit to Staten Island, where he made the case for the swift passage of a federal lands package, U.S. Sen. Charles Schumer announced that his push to allow the National Park Service (NPS) to grant an easement to New York City for access to land so they can perform maintenance and general operation of the Staten Island Seawall has just passed the Senate as part of a larger bipartisan federal lands package. The bill now goes to the House, where it is virtually certain to pass.

Schumer successfully shepherded the legislative solution into the Senate lands package to push back against a bureaucratic finger pointing and turf wars that threatened to delay, or possibly upend, the Staten Island Seawall project so critically needed to protect the island in the event of a major storm.

"I am pleased to report that after a long back-and-forth, we have torn down the wall of federal bureaucracy and now we can officially build the seawall Staten Island needs for protection against the devastating flooding we saw during Superstorm Sandy," said Schumer. "This legislative fix will give the Army Corps and New York City the site access needed to construct and maintain the seawall. This easement was a final puzzle piece and now it is falling right into place."

The bill Schumer has pushed, the Natural Resources Management Act, S. 47, is a bundle of more than 100 individual land bills and allows for NPS to grant an easement in Gateway National Recreation Area, which is a unit of NPS, to New York City for access to the land so they can perform future operation and maintenance on the seawall.

The problem Schumer has been pushing to fix has been that the Sandy supplemental tasked Army Corps to build the seawall, but for local sponsors like New York City to take care of those projects in the future, they need continued access to the property. In this case, Army Corps would not build the seawall on NPS property unless the city also had a real property interest, like an easement, in the project to guarantee that they could do the operation and maintenance. The bill allows for the city to meet the standard that Army Corps has set out to be able to perform future maintenance on the seawall, thus allowing for the Corps to build the seawall on NPS property.

The seawall project provides protection for Staten Island homeowners from disastrous storm surges and rising tides. Hurricane Sandy devastated the neighborhoods along the East Shore of Staten Island. The residents of Staten Island bore the brunt of this catastrophic storm, not only in the form of destroyed homes and businesses, but also through devastating loss of life. Staten Island will be made stronger and more resilient with the completion of this project. Schumer has long said that it is crucial that federal agencies along with local partners continue to work together to ensure the safety of homeowners and the construction and maintenance of the seawall.

The Army Corps South Shore Seawall project, which stretches from Fort Wadsworth to Oakwood Beach, includes a buried seawall with a raised promenade through the Miller Army Airfield Historic District, which is under the control of the National Park Service (NPS) as part of the Gateway National Recreation Area. After the project's completion, New York City must retain access to the entire seawall, including at Miller Field, for the purposes of operation and maintenance. In the 2016 Project Feasibility Report, NPS had determined that they will grant an easement to the City for the placement, maintenance, and operation of the seawall.

However, starting this past year, the Solicitors Office at NPS re-opened a review of their legal authority to grant the easement under the 1972 legislation originally establishing the Gateway National Recreation Area, threatening to interminably delay the signing of the Project Partnership Agreement that is necessary to lock in funding and move the project forward. Schumer responded to this renewed legal review by meeting with then-Secretary of the Interior Ryan Zinke to bring this potential issue directly to his attention and request that NPS cut through the red tape and achieve an administrative solution to the easement issue.

Simultaneously, Schumer worked across the aisle with then-Congressman Dan Donovan to craft a legislative fix that would enhance the authority of the Interior Secretary within the Gateway National Recreation Area to grant easements and rights-of-way for projects like the South Shore Seawall that prevent flooding and shoreline erosion.

After that legislation failed to pass at the end of 2018, when a potential deal over a package of similar lands bills fell apart, Congressman Max Rose reintroduced identical legislation at the start of the new Congress, as part of a new lands package, which Schumer worked to shepherd through the Senate. Schumer also partnered closely with the Army Corps to ensure that the necessary preparatory work, including geotechnical boring and sampling, continued so that the project's timeline would not be further delayed.