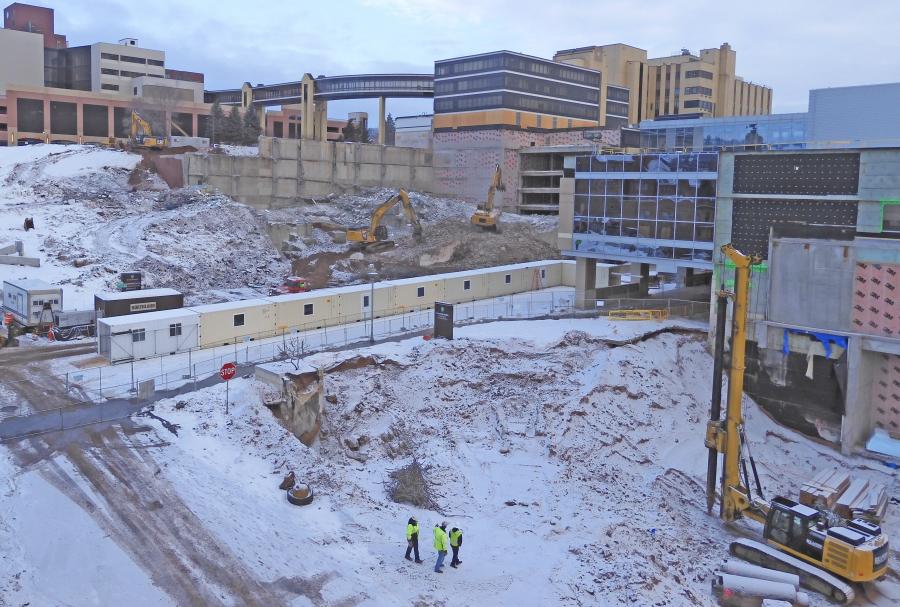 Twice-daily blasting is required at the site of a 12-story hospital bed tower, which is part of Essentia Health's $800 million Vision Northland project on its medical campus in downtown Duluth, Minn.

The construction project began on Sept. 25, 2019, with the interior demolition of the two-story Amendola Building; two other smaller structures; and a parking ramp -- the Blue Ramp -- a 60 to 70 ft.-tall structure.

The next step was to remove more than 44,000 cu. yds. of basalt (volcanic) rock by blasting and mechanical means so that crews could start on the tower's foundation in the spring.

A test blast occurred Dec. 2 to determine if the blasting operation was effective and crews could minimize noise for patients and staff.

"The test blast followed all safety measures and protocols and went according to plan," said Phil Johnson, McGough Construction Co. Inc.'s project manager. "It met all compliance specifications according to data from our engineers."

Daily blasting, one at noon and another at 4 p.m., Monday to Friday, started on Dec. 3. The blasts, which lasted for one or two seconds, sound like a muffled thud. 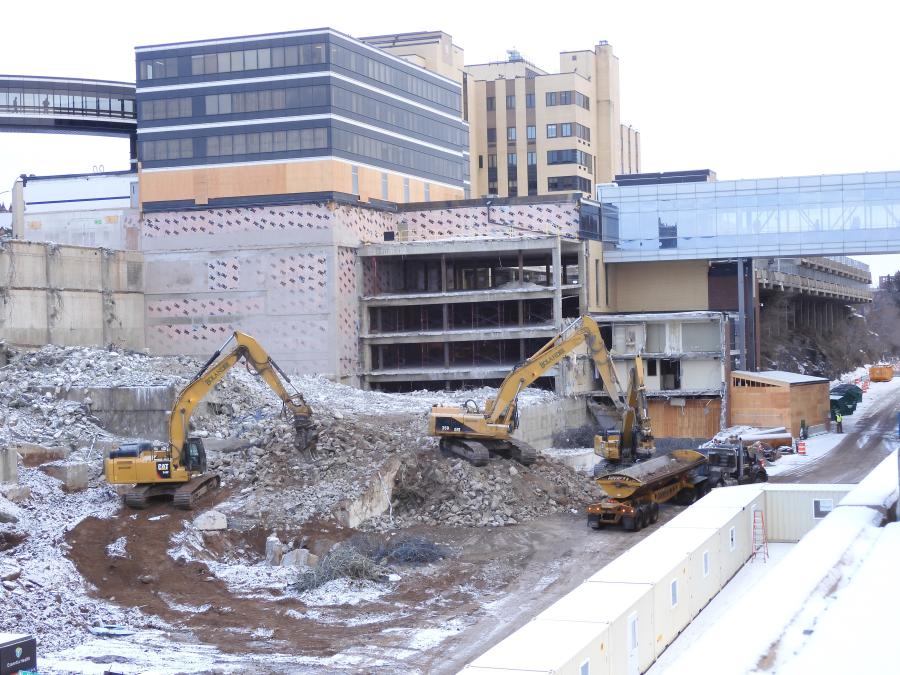 The blasting area, along Fourth Avenue East, started near Superior Street and will expand to East Second Street. With blasting occurring near tunnels on Interstate 35, Essentia Health and the Minnesota Department of Transportation are monitoring the impacts of the explosions.

Due to the city's topography, this type of rock excavation is common. Crews are using data gleaned from engineering studies and blasting done during construction of the Duluth Clinic's First Street Building on the Essentia downtown medical campus (2004-2006) and the construction of I-35.

The new hospital tower and clinic space, being constructed by McGough, will occupy about 928,000-sq. ft. The project is complex because it is being built on a hill with an 18- to 20-degree grade. The 12-story glass-clad hospital bed tower on East Second Street will sit atop a rectangular platform that extends two blocks to clinic space that rises eight floors above Superior Street. Three floors span the entire distance and connect the hospital and clinic areas.

Northland Constructors of Duluth Inc. was hired to do the blasting and excavate the site. The goal is to remove between 330 and 350 cu. tons of rock daily, which is being hauled to a location on Garfield Avenue, approximately 4 miles away.

"From there, uses could include as a breakwater along Duluth's Lakewalk and the shoreline of Lake Superior in Bayfield County, though nothing has been finalized," stated an Essentia press release.

The goal is for the blasting operations to avoid impacting patients at Essentia's adjacent facilities, which includes clinics and St. Mary's Medical Center and Children's Hospital. The blasts may be felt within a 300-ft. radius of the explosions.

Minimizing the impact of vibrations is crucial. Blast sites are covered with mats and tires to ensure that rock and debris do not pose a hazard. McGough has placed vibration sensors at several locations and has a squad of safety officers on-site to ensure that state and federal regulations are met.

"Sometimes we don't excavate all the rock and a drill rig drills another hole to certain depth that is filled with raw blasting material," said Johnson, who pointed out that standard blasting chemicals are stored in a vehicle which is brought to the site daily. "When the ‘all clear' is given, the decision is made to remove the rock ore and drill a new hole. The blasts lift the mats three or four feet."

Northland is using a Gardner-Denver Reedrill SD345 drill rig to create the holes. The rock is being removed via the use of a number of Cat excavators of varying sizes - 329, 336 and 349 — and loaded directly into trucks.

The debris from a blast can be removed within four to five hours. The amount of debris created, ranging from small rocks to 2- to 3-ft. pieces, depends upon the size of each blast.

Some of the rock was removed by mechanical means when crews were too close to a building. This was done with a drill rig and an excavator equipped with a hammer.

As noted, the work began via the demolition of the Amendola Building and other structures through mechanical processing using several Cat excavators. 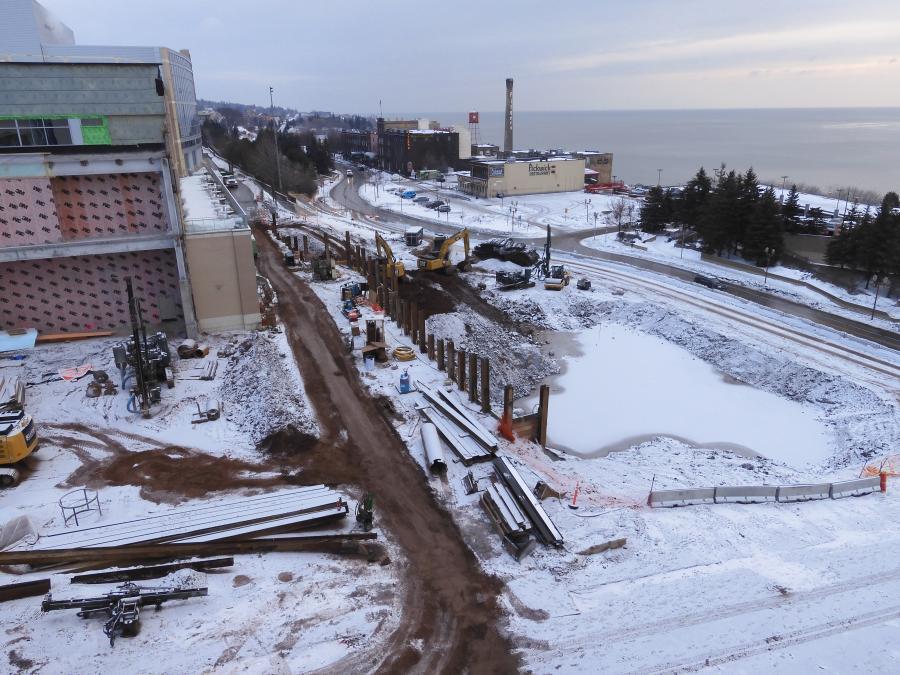 "We worked alongside McGough and Bolander to safely execute phase 1 of the demolition over three months of work in various weather conditions," said Charles Bell, project manager, Northland Constructors Inc. "An engineered plan was developed to safely demolish parts of an existing building that is connected to a live hospital."

The demolitions will result in a decent amount of concrete and steel.

The installation of the cast-in-place sloped foundation, which includes footings and walls, started in January and should be finished in early summer. A key element will be an 18-ft. thick concrete counter-wall at the base to support the structure.

"It will be 245 feet long and be 40 to 50 feet below the street," said Johnson. "The concrete will be primarily pumped by trucks and shot up to whatever deck we're at. We have cold weather policies for our concrete and we'll be blanketing the pours for the substructure."

Steel erection for the tower is expected to be completed in the late summer of 2021, which will be followed by the placing of the glass curtain wall. Lejeune Steel Company is providing the steel beams.

While there are no restrictions regarding night work, the plan is to do everything via day shifts. The blasting operation had about 70 people on-site and the foundation work will require more people.

New materials for the construction — concrete, steel, glazing and others — are still being determined.

For the foundation work and construction of the building, McGough will be using cranes, excavators, skid steers, front loaders and other standard equipment. Northland recognizes the need to maintain its fleet due its operations.

"Working in cold weather conditions can be tough on equipment," said Bell "We have skilled mechanics that can be on-site as needed to quickly address any situations."

Johnson knows that his crews and those of the subcontractors will meet the delivery deadline.

"We are optimistic in our current schedules and maintaining them," he said. We have a lot of major challenges ahead of us, including the selection of materials and by the scope of the owner and final design by the design team. It's in everybody's hands to get it done on time." CEG