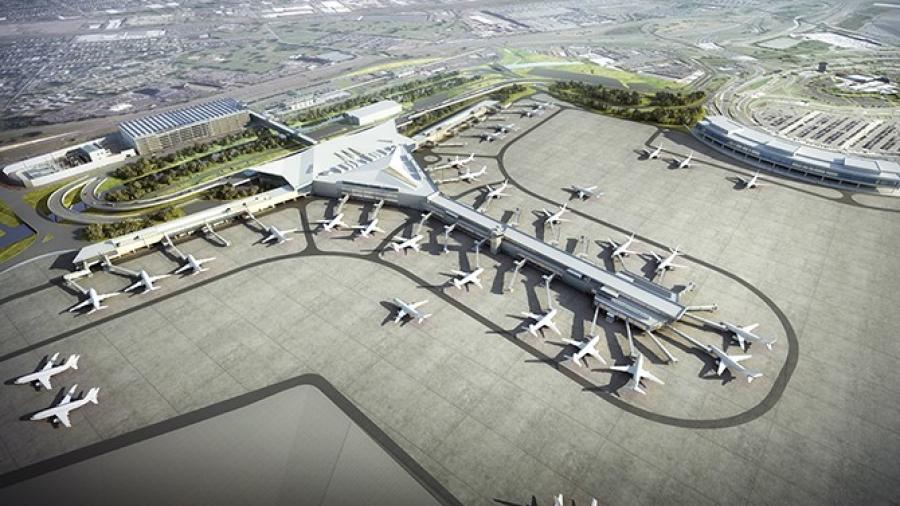 The Port Authority Board of Commissioners approved $496 million for major projects as part of the Terminal A Redevelopment Program. (Port Authority of New York & New Jersey photo)

The Port Authority Board of Commissioners approved $496 million for major landside and airside projects as part of the overall $2.3 billion Terminal A Redevelopment Program at Newark Liberty International Airport (EWR).

The board's commitment will significantly advance the redevelopment program, which is designed to deliver a new terminal that will comprise 1 million sq. ft., accommodate 33 aircraft gates, provide a more efficient roadway network and create parking for about 3,000 vehicles.

The new passenger terminal, to be known as Terminal One to avoid confusion with the existing operational Terminal A, is scheduled for a partial opening in 2021, with the facility expected to be fully operational in 2022. The redevelopment program, approved by the Port Authority board in March, projects the creation of 10,390 jobs, $998 million in wages and $3.93 billion in regional economic activity.

“Newark Liberty is experiencing unprecedented growth in passenger traffic, up about 7 percent this year and on pace to greatly exceed the record 40 million customers we served in 2016,” Kevin O'Toole, Port Authority chairman said. “As another record year for Newark Liberty and our entire airport system draws to a close, this vote reaffirms our agency's commitment to modernizing our airports and delivering world-class customer service.”

“Today's authorizations will help accelerate a program that everyone agrees is vital to the airport's future success,” added Jeffrey Lynford Port Authority vice chairman. “And that success hinges on delivering operating efficiencies and enhancing the travel experience for tens of millions of customers who rely on Newark Liberty for their air travel needs.”

An additional $250 million was authorized for two new projects directly tied to terminal redevelopment: $175 million to pave 40 airside acres to create needed aircraft parking positions, and $75 million for foundation work on new terminal frontage to accommodate a future AirTrain alignment. These projects, which are being funded through PFC collections and other offsets to the existing capital plan, will be implemented by program contractors concurrent with the Terminal A airside and landside work.

In addition, the board approved $8 million to analyze the feasibility of consolidating rental car facilities (CONRAC) to centralize operations of all rental agencies serving the airport, as well as the design and construction of a new 3,000-space public parking garage that would help serve Terminal One and could be integrated into the CONRAC facility. Pending the outcome of the feasibility study, a development agreement could come later next year.

The new Terminal One will have the capacity to accommodate 13.6 million passengers annually while retaining the flexibility for future growth and expansion, serve larger aircraft and meet changes in passenger demand. The current facility, opened in 1973, was designed to handle a maximum of nine million passengers per year.

For more information, visit the redevelopment webpage and http://www.panynj.gov.