Joe Bommarito always knew he wanted to be his own boss. Starting a business focused on utilities made sense, considering he grew up helping his dad out with his utility company.

"I worked there in the summers and every chance I got to go back and help out," said Bommarito. "I learned all aspects, starting with doing every job that went with the business. I grew to love it and never really saw myself doing anything else." 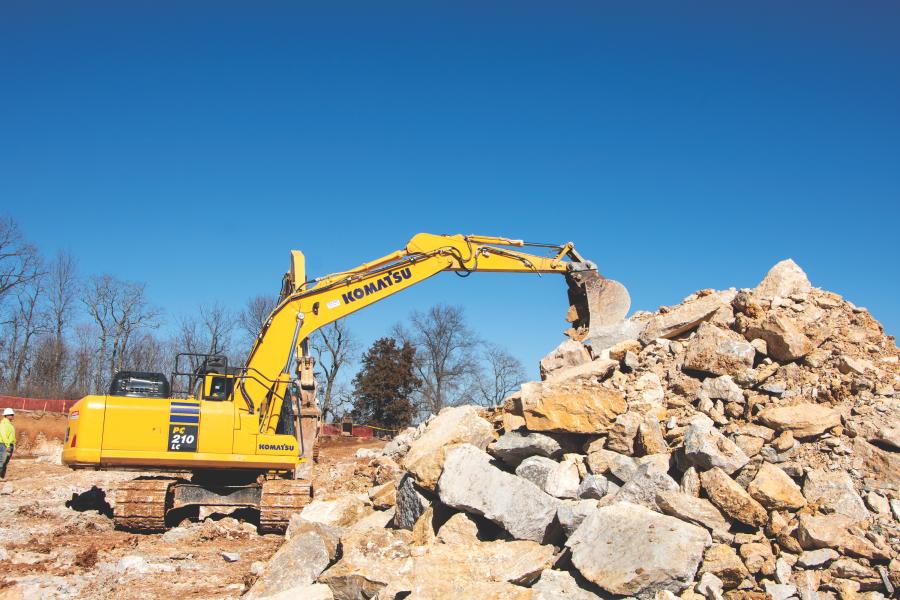 "I had 10 guys, and we were doing a lot of maintenance work, such as tearing down and repairing inlets and fixing sewer laterals and mains," recalled Bommarito. "Here and there, we would get a nice-sized utility job and some bigger work such as putting in large box culverts. We became very efficient and known for our good work."

Bommarito noticed that his company was often paired with grading contractors during site work projects. He believed that scope of work would be a good way for Bommarito Construction to expand.

"It seemed logical to me that if we could provide both aspects to a customer that it would be to our and their advantage," said Bommarito. "As before, we started small, but things ramped up fairly quickly. Before long we added installation of fire protection systems, including the hydrants and lines, as well as regular domestic water lines."

On Time, On Budget

Additional services put Bommarito Construction on the path to being a full-service site contractor. Today, it offers everything from clearing and grubbing to finish grading, typically for commercial and residential developers and general contractors. With a staff of about 120, including nearly 100 in the field, it mainly covers the greater St. Louis metro area.

"We are on about 20 different projects daily," said Bommarito. "In addition, we probably have another 50 jobs on the books that we are in and out of due to phasing. There is no way it would be possible to keep it straight and humming along without a solid group of people, and I certainly have that. Many have been here 15 years or more, and that plays into our long-term success."

Bommarito also credits his staff's quality work for building a list of repeat customers who rely on Bommarito Construction to handle their site work needs. Key individuals include his brother, Matt, who has been with the company since its inception.

"Customers appreciate that we finish on time and on budget," said Bommarito. "I have to commend our employees for that. We are all driven to provide clients with the best service possible, from project management to completion. I consider them family."

During the past two decades, Bommarito Construction has been involved in several high-profile jobs in the St. Louis area, including ones at Kiener Plaza and the St. Louis Zoo. A current undertaking has the company providing site construction for the expansion of a care facility in Eureka that includes 25 new buildings. It started with clearing and removing about 12,000 yds. of topsoil and clay in December. 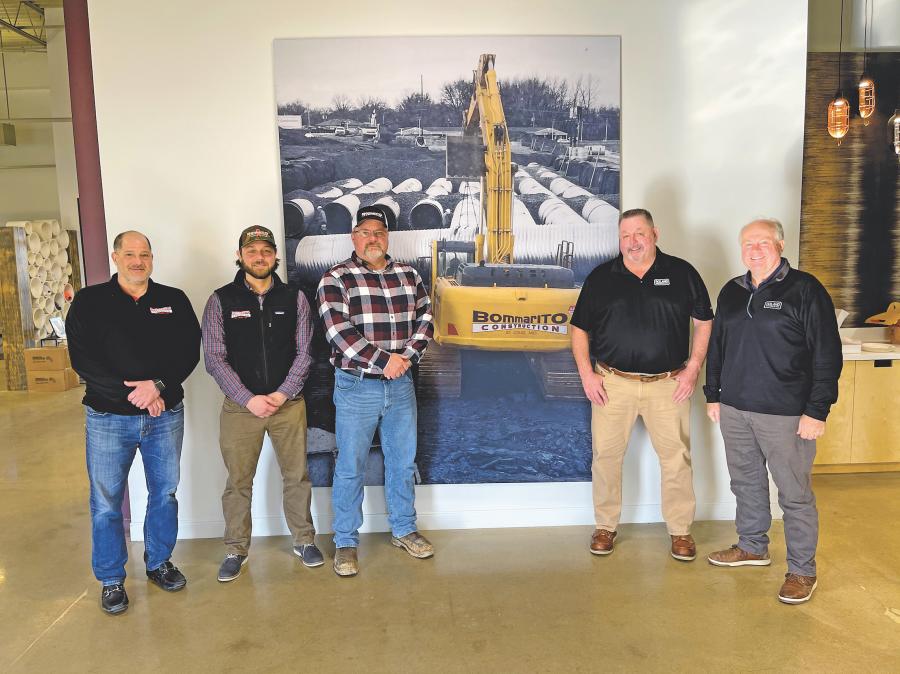 "That was the easy part; rock excavation is the biggest challenge, and there is about 11,000 yards of it that has to be hammered out," said Hunter Henry, vice president/project manager. "We knew that was going to be the case, and we pushed to do blasting. Because it's located in a residential area, that was not an option."

Henry, Doug Frey, project manager of earthwork/estimator, and John Gilbert, project superintendent, developed a plan to cut, hammer and excavate the rock as efficiently as possible. They chose to equip some of Bommarito Construction's Komatsu excavators and rented units from Roland Machinery Company with Epiroc and Tramac drum cutters and breakers.

"There was a layer of capstone that we could fairly easily remove with the cutter," said Gilbert. "After that we hit hard limestone, so hammering became necessary. We have a PC490LC with a breaker that's hitting at 12,000 pounds and a PC360LC with one that hits at about 7,500 pounds. They are definitely getting the job done."

Both are paired with a second Komatsu excavator, either a PC360LC-11 or a PC210LC-11, that is used to clear and pile the fractured rock as Bommarito Construction operators work to reach subgrade. They used a combination of hammers and the drum cutter to excavate the approximately 10,000 ft. of utility trenches included in the project. Bommarito Construction plans to crush the material and reuse it on site.

"We were delayed in getting started because we did some redesign to ensure that there was as little effect as possible on the surrounding neighborhood residents, including giving them more green space between the project and their backyards," said Frey. "Everything is on schedule now, and the productivity of the excavators/breakers combination has played a big role in that."

Bommarito Construction began using Komatsu excavators in 1999 when Joe Bommarito bought a PC300 from Roland Machinery. After years of use, he sold it, but he kept the panel that had fallen off the machine. His wife cut it up to create a wall hanging for his office.

"Komatsu excavators last, even in tough applications like hammering rock day in and day out," said Bommarito. "The durability is outstanding. We have run them to 10,000 hours or more without replacing major components. We know we're not going to have to worry about breakdowns, and when we trade them in, someone else is getting a solid used machine." 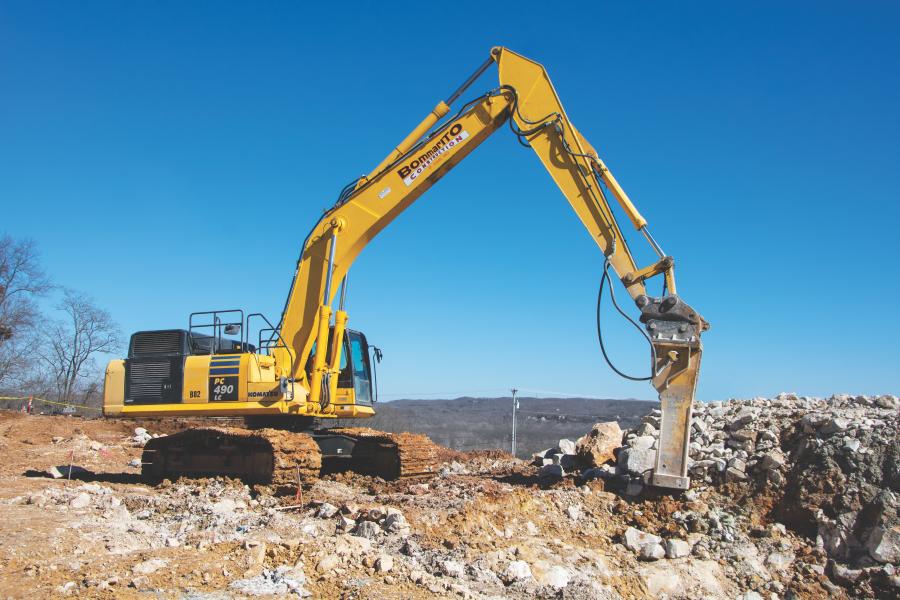 He added that service from Roland Machinery also plays a role in continuing to use Komatsu. Bommarito worked with Craig Ferris, territory manager, on his most recent purchases and rentals.

"I can count on Craig and Roland [Machinery] to deliver 100 percent of the time," said Bommarito. "They are knowledgeable, so they can best match the machines and attachments to the task. We don't have mechanics, so Roland [Machinery] does all our service and repairs. They track the excavators with Komtrax — which we also use to track hours and location — and let us know when it's time to schedule a visit. It's seamless."

"I can take information gathered from those and put it together to see the quantity of materials that have been moved," said Ryan Meers, project manager. "The technology gives us an accurate picture of what a site looks like at certain points of its development."

Bommarito plans to use the technology as much as possible, including on new ventures such as the bio-pond maintenance and rebuild projects that Bommarito Construction recently started pursuing.

"We are always looking for opportunities to expand in ways that make sense and fit with our core services," said Bommarito. "For instance, we started a separate company called American Fire about two years ago that's focused on the installation of fire systems, including interior lines and sprinklers. There is synergy between it and Bommarito Construction. If one company sees a job that the other can do, they can pass it along. It seemed like a logical next step, and it's been very successful."

This article first appeared in Roland Industry Scoop and was reprinted with permission of Roland Machinery. CEG