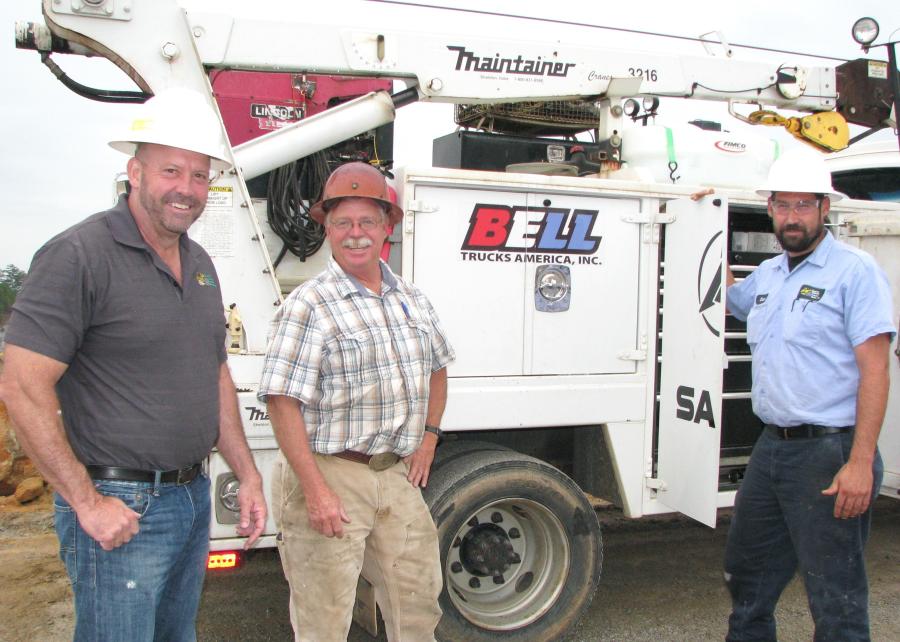 Hauling rock out of a quarry is about as heavy-duty as any job can get. The people that do it have to be tough and stay sharp for hours each day both to stay safe and to keep the material moving.

But they also cannot accomplish their task successfully without the right kind of equipment.

Mining and hauling demands stout and reliable machinery. It is hugely important, too, that material hauling be done efficiently to keep fuel costs low for the company moving the rock out of the pit.

Ray Lambert did a lot of research before he found a new truck that met all these criteria and, so far, he has been very pleased with the results.

Lambert operates Lambert Sand & Gravel Co. in McDonough, Ga., just south of Atlanta. Currently, his firm is working as a subcontractor for Vulcan Materials to haul overburden out of its Stockbridge, Ga., quarry.

To help him with the decision on which truck to purchase, Lambert turned to the professionals at Central Atlanta Tractor, based in nearby Austell, Ga. The full-service dealership was founded in 1995 by Charles Spooner and is now operated by his son, Chuck.

In the end, Lambert this year chose the Bell B50E off-road truck, a brand-new model on the market — so new that his B50E was the very first of its kind sold in the United States market.

In addition, Vulcan Materials bought a Bell B60E this spring for use at its Dalton quarry in northwest Georgia — also from Central Atlanta Tractor.

That machine was the first one sold by Bell Trucks east of the Mississippi River and the fourth sold overall in the country. The huge B60E, owned by Vulcan, also is the first model delivered to a quarry and the first used in the aggregates business.

The job of moving overburden from a pit is one that is a bit more complicated than it sounds.

“In our line of work, you are always going to burn a lot of fuel,” Lambert said recently from the Stockbridge quarry site. “We're climbing out of a hole and we have got about a 1.4-mile round turn. To do it, we have to stop, make a 160-degree turn and then start back up a hill again. We are under a full load probably about 30 percent of our run, meaning we are going to be on the high end of our fuel burn — approximately 10 gallons per hour.”

His operators are also working close to 12 hours a day, five days a week to pull hundreds of thousands of yards of rock out of the quarry to reach the valuable blue granite underneath.

That type of hard, continuous labor is a true test of a machine's brawn and resiliency, Lambert said. He said the trucks he uses have to withstand “a pretty severe application.”

Lambert had previously used smaller trucks that gave him adequate production and economy.

But when he felt he needed an upgrade, he carefully read and studied the specs on the Bell 50-ton. He immediately saw several things that impressed him, such as the horsepower to weight ratio, the bed size, the automatic lube system and, most especially, the new Allison transmission.

“One of the reasons that I even considered this truck was because the new ones are running an Allison transmission — obviously American made and one that has higher capacity with seven speeds,” he said. “I also liked the higher performance and great design of the Mercedes-Benz engine.”

Those specs and his watching the equipment in action have told him that the 50-ton truck is a great niche machine.

“We have to be extremely efficient in our work,” he said. “We saw that the 45-ton trucks are tire-limited because most people run them with a 29.5-25 tire, which is the maximum size truck you can run on that tire. Bell, however, went to an 875/65 R29, which is a completely new tire design with a higher capacity, meaning that you cannot have a true 50-ton truck using the other tire. The Bell really is the first true 50-ton truck.”

As far as capacity and cost, the Bell B50E is adding about 4 ½ to 5 yds more per load than the older trucks Lambert used, while keeping operating costs level.

“When you are paying the driver the same amount as before, that is really what you want,” he said. “It especially shows up on these really long round turns and we have about a 12½-minute round turn right now. If it doesn't cost any more to have that much more on the truck it actually can be a game changer.”

Not to be overlooked is how operator-friendly the Bell trucks are.

“When the operator comes out of the truck at the end of the day and looks like a hundred miles of bad road, then you obviously have not made the right choice on the truck,” Lambert said. “I want to take care of my people — they are my most important asset so I want to make sure that I can give them the best equipment I can. These trucks have a very smooth ride and it is a good feeling to know that you can put an operator in one and he doesn't feel like he has been in a rodeo all day.”

Lambert worked with Chuck Spooner and Matt Cantrell of Central Atlanta Tractor not only to get the equipment he needed, but also to help train his people on how to use the trucks.

In addition, Lambert Sand & Gravel also has a service and maintenance contract with the dealership and monitors, via GPS, the performance and production of the new Bell trucks using the Bell Fleetmatics online service.

“Bell Fleetmatics keeps up with approximately 30 different aspects of the performance of the truck, as well as the number of hours it is working so that we know when it is time to service and we can call Ray and schedule a time to come out,” said Spooner. “Both the dealership and the customer can check the information at any time online, plus get email reports daily to see what the truck did the previous day.”

Spooner sees the Bell trucks as machines that offer excellent value when you consider their cost to what they give you in production.

“Like Ray was saying, his B50E is a true 50-ton truck,” he continued. “Nobody else is able to do that. With the price point of the truck based on the niche and the size, you are getting so much more production and value for your dollar. It has the best fuel economy in the class — they literally sip fuel.”