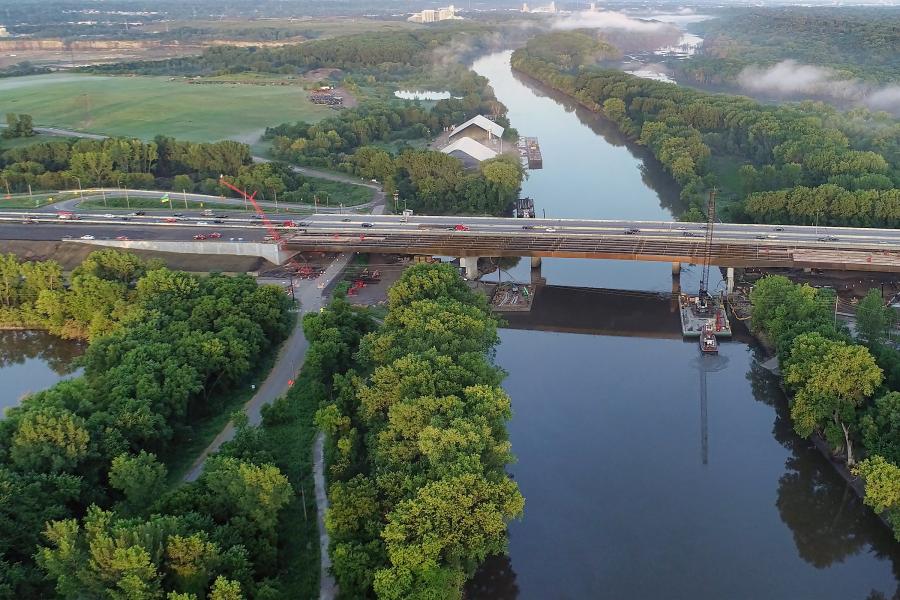 In just a matter of one year when cranes began to loom over the original 35W bridge crossing over the Minnesota River, regular commuters are now seeing real progress on its replacement. Connecting the cities of Bloomington and Burnsville just south of Minneapolis, traffic crews recently switched all six lanes from the old bridge to the new, northbound bridge.

This traffic switch was a major milestone that was met right on schedule in spite of bridge workers enduring one of the more brutal, Minnesota winters and unrelenting high river levels going into late summer this year.

The Minnesota Department of Transportation (MnDOT) is leading the construction. It is in partnership with Dakota and Hennepin counties and the cities of Burnsville and Bloomington to bring this bridge to the traveling public.

Constructed in 1957, the 62-year-old structure has out lived its capacity while maintenance work and expenses continue to rise. The bridge now carries 114,100 vpd with a projection of 136,700 vpd by 2040.

The Environmental Assessment (EA) report states that "normal, progressive deterioration will require substantial rehabilitation and or replacement of bridge elements within the next five to ten years while the steel girders are likely nearing the end of their design fatigue life." 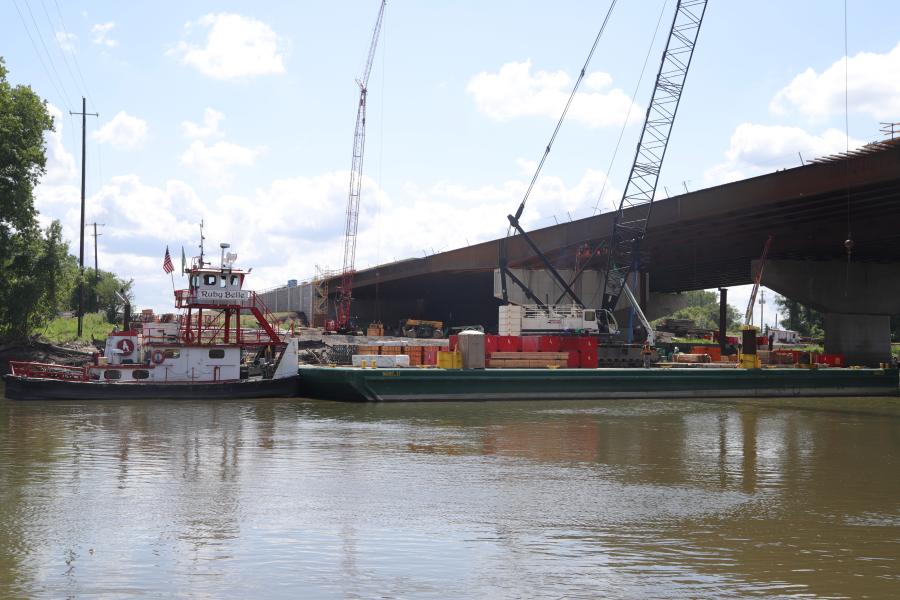 The construction site is approximately 15 mi. south of the tragic collapse of the 35W Bridge carrying traffic over the Mississippi River through the heart of Minneapolis. The collapse took 13 lives. More than 100 others were left injured in the mangled mass of steel and concrete that dropped into the Mississippi River during the evening rush hour traffic peak on Aug. 1, 2007.

Ames Construction is headquartered in Burnsville, Minn., with regional offices throughout the country. Ames is a full-service, heavy civil and industrial general contractor that serves customers throughout North America.

Like other construction projects in Minnesota this year, the weather through the first four months of 2019 challenged construction crews in every way possible. With steel girder work to start earlier this year, workers suddenly faced waves of snow and cold that moved into Minnesota in late January this year and did not let up until the second week in April.

Even as snow continued into late March and April, the cold spell began to break apart to bring on warmer temperatures. The Minnesota River rose to flood stage in late March. Rain began falling in May and into the rest of the summer to keep the river running high; forcing work to stop and delaying the superstructure work on the bridge, said Alex Carlin, Ames senior project manager.

Yet, MnDOT and Ames project management staff are happy with construction progress to date.

"We have a plan in place to keep the project on track," said Carlin. And despite the challenging winter and high river levels, "construction is going well and the project is on schedule."

The high water levels have been particularly vexing and persistent for construction crews.

"The Minnesota River is like a yoyo here; up and down. In the year we've been out here, we have seen about a 22-foot fluctuation in water levels. At normal pool, the water is about an elevation of 690 feet. When it is high, it rises to an elevation of 710 feet," Carlin said.

MnDOT 35W/Minnesota River bridge construction manager, Thomas Villar, echoed those thoughts and is pleased with the progress made to date.

"Despite extended high water this spring and summer with a 22-foot bounce in the river, the substantial completion date has been moved from mid-September of 2021 to early August of 2021 with the goal to move traffic onto the new southbound bridge by late fall of next year. We are currently tracking ahead of schedule and within budget. Things are moving along very nicely," Villar said.

When construction crews pick up and leave the site in the fall of 2021, commuters, truckers and travelers will have a new bridge with a wider deck and improved geometrics to increase its safety, capacity and efficiency.

At 1361 ft. long, the deck will carry six, 12-ft. traffic lanes and two HOV traffic lanes with a 12-ft. multi-use trail on the northbound side of the bridge. With a total width of 151.2 ft., the new bridge will be nearly 50 ft. wider than its predecessor.

Seven thousand tons of steel girders will top off the structure.

The bridge and its approach on the south end will be raised up to 4 ft. to meet the 100-year-flood criteria.

Included in the total project package, two shorter bridges crossing an arterial street at the north approach will be replaced along with the reconstruction of approximately 2 mi. of the freeway at both ends of the new bridge. 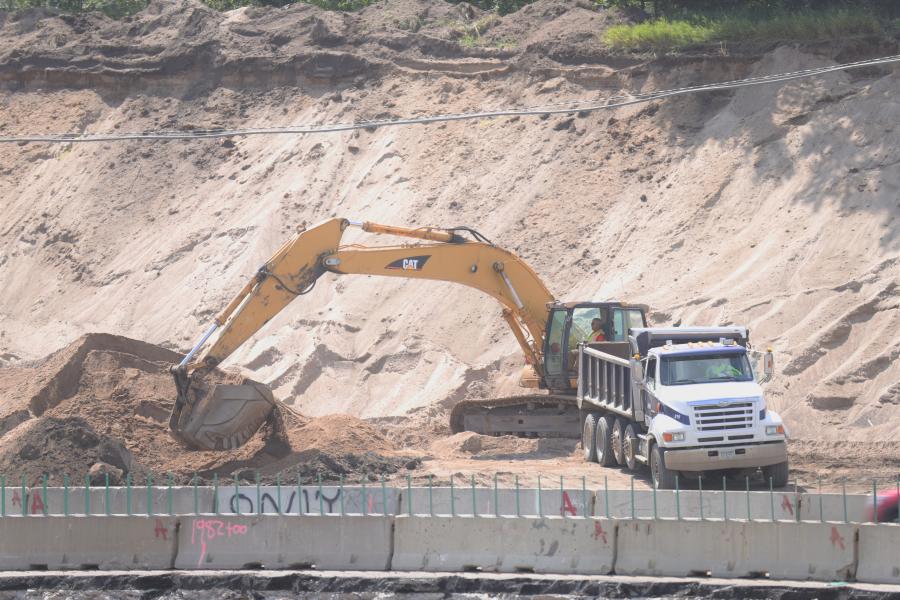 Because of the additional 2 mi. of freeway reconstruction, sewer pipe quantities are huge on this project. Approximately 26,000 liner ft. of storm water pipe will be buried by the end of the project.

To bring this bridge to the public, labor will consume 300,000 work hours and bring to the construction site an estimated 125 workers supplied by Ames and its 30 sub-contractors.

To date, crews have completed the northeast embankment wick drains and surcharging. Substructure work for the northbound bridge was completed in March of 2019 with steel girder erection beginning in May.

Construction began in the fall of 2018 with tree clearing, causeway construction and building a pair of cofferdams for the two piers standing near the river channel.

To get to this point one year later with the new, northbound bridge completed and stay on track of the project schedule in spite of the harsh, winter weather, "we worked six, sometimes seven days a week double shift on all the foundation and sub-structure work to get to the point that when it did flood, we were only working on the super structure which does not affect us as much," Carlin explained.

"Likely we will have to do the same thing in the spring of 2020," Carlin continued. "You almost have to pretty much plan on spring flooding because if you don't, and it floods, then you'll have problems. If it doesn't, great. If it does, then we're in a good position to deal with it."

With up to a total accumulation of 80 in. of snow and many days where temperatures dived to nearly 20 degrees below zero last winter, Carlin credits his own crews with Ames Construction and the many sub-contractors working on the bridge to date for maintaining the project schedule.

"Our workers were able to work through the snow and cold, under extreme weather conditions to keep this job on schedule. We did lose some days from the extreme snow and cold, but by and large, we worked through it all," Carlin said.

To accommodate the additional deck width at the north approach, truckers dumped thousands of tons of fill to build a large, staged embankment on the northeast side of the bridge. Trucking operations for this phase of the project began in early November 2018 and finished up by the middle of that December.

To expedite the required settlement criteria, "we installed wick drains. So, we had about two months of construction and two months of settlement which allowed us to start building the embankment last February," Carlin explained.

With all traffic flowing on the new, northbound bridge, bridge crews have temporarily switched gears and moved on to the demolition of the original bridge while land crews continue on the highway work.

Demolition steps include removing the concrete deck, cutting and lowering the steel girders to land and to barges anchored in the river before tearing into the piers using excavators equipped with hydraulic breakers.

For the two piers standing in the river, "we'll remove them down to a couple of feet above river level and then drill and blast the underwater sections of the piers," Carlin said. 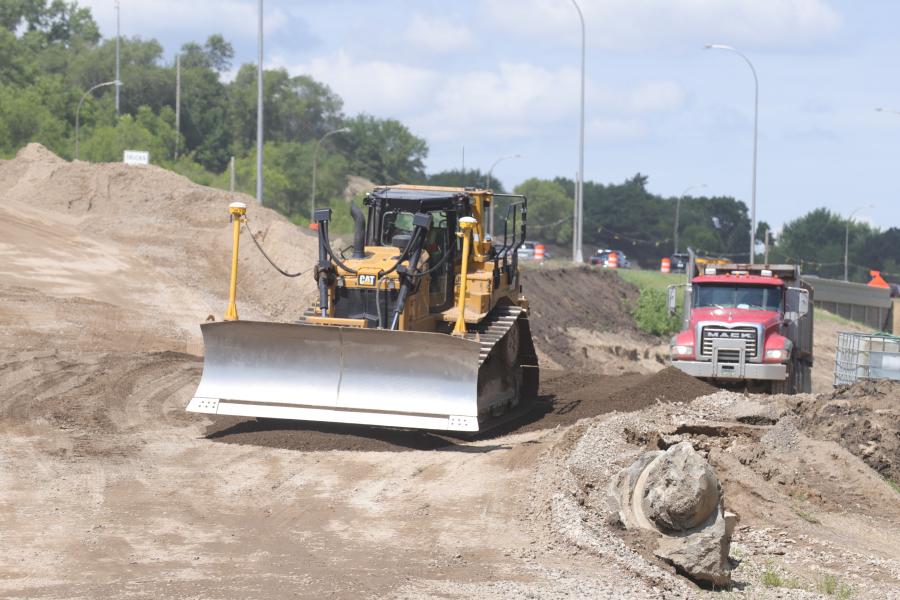 For the girder removals, there will be quite a few dual picks that will require close coordination and communication between the welders torching the steel, the crane operators and the foreman directing the picks.

"We'll torch the girders and remove them in reverse order they went up. It's critical the workers doing the cutting, the crane operators and foreman directing the work that they all stay in communication as the girders are being rigged, cut, lifted and then lowered to the ground," Carlin explained.

All the material removed from the old bridge will be put to good use.

"Every component of the existing bridge will be used," Carlin said. "All the concrete will be crushed and processed on site to be used for aggregate to build the new road. All the rebar and structural steel will be used for scrap."

Ames Construction is shooting to complete demolition and material removal of the existing bridge by February.

Most native Minnesotans will tell you that a Minnesota winter can be very fickle with a mind of its own. Hopefully, for the 35W bridge crews, the upcoming winter will defy another long term forecast of snow and cold and bless them with more milder temperatures and less snow to work in. CEG