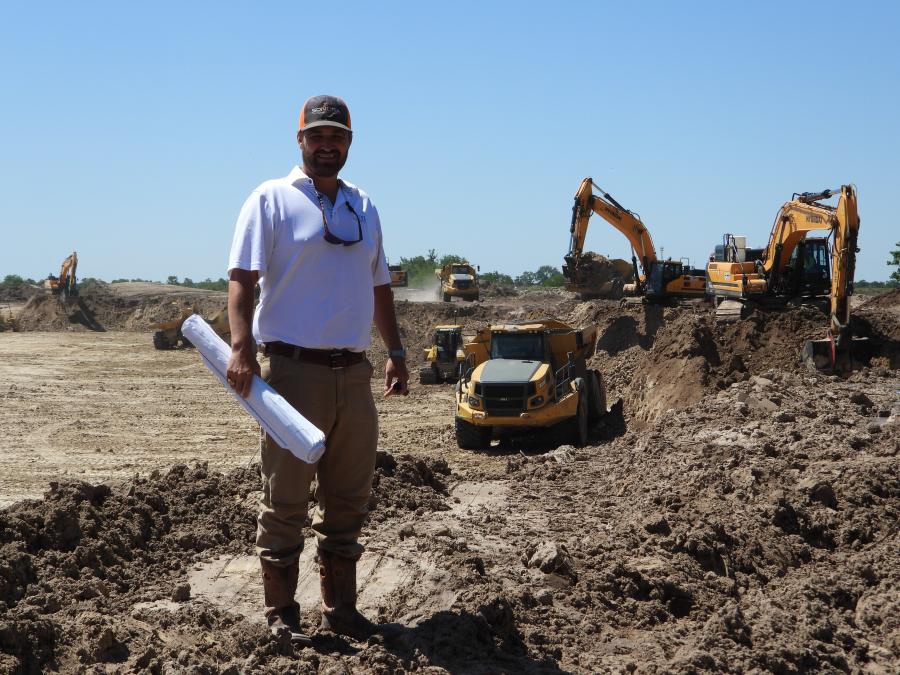 Brittain Griffith, owner of Sonora Construction in Houston, checks on progress at the Bridgeland subdivision site. Story on page 40. Sonora is moving 2.4 million cu. ft. of dirt to create a 4-mi.-long string of lakes in the Howard Hughes Company development.

Brittain Griffith likes to play in the dirt. Millions of cubic yards at a time.

The self-proclaimed "high-tech redneck dirt mover" likes to go "as hard and fast as I can every day." That, coupled with an unyielding desire to push the limits of his operation's capabilities has made his company, Sonora Construction, one of the largest excavation companies in Texas.

"But all along, my goal was to meet the requirements to take the PE exam and then consider a career in construction, Griffith said. "I always figured I'd switch over to the construction end. Ever since surveying with my dad during the summer growing up and watching those contractors lay pipe and move dirt, I knew that's what I wanted to do." 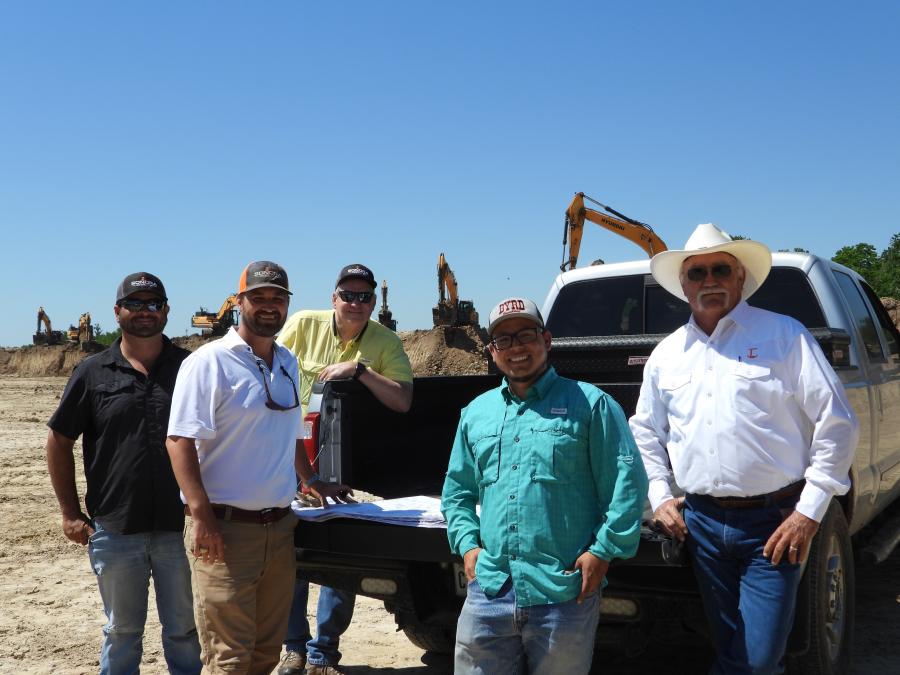 Griffith did exactly what he intended to do and "switched over" to construction after working five years at the engineering firm. "With my wife Jennifer's full support I left a perfectly normal, secure job and started a construction company," he said.

"When my wife found out my first piece of dirt-moving equipment cost more than our house, I had a lot of explaining to do," Griffith recalled of the early days.

The fledgling company started humbly enough, tackling only what Griffith describes as "small jobs." "We worked fast and cheap," he recalled.

That early business model turned out to be the right one when the financial crisis of 2008 hit. Being lean kept them in business, according to Griffith. "We were down to three employees, but we kept working," he said.

As Texas came out of the recession in 2010, Sonora found a niche in finishing out cancelled residential subdivision contracts that were being restarted after being shut down the previous years. "That really accelerated our growth and by 2012 we were billing out over $5 million per year," Griffith said.

Larger projects soon came their way, and Sonora grew rapidly over the next several years.

As the size of the projects the company tackled increased, so did revenue.

The company now employs between 70 to 100 people.

Obstacles along the way

"It was hard to be bankable when we were small and just getting started," Griffith said, referring to the challenge of securing capital in the early years. "We needed a good equipment partner, and that came along eventually."

Wet weather, including the devastation of Hurricane Harvey, contributed to some challenging years along the way as well. "There were some very wet years, and if we aren't moving dirt, we aren't making money," Griffith said

Just prior to Hurricane Harvey landfall in 2017, the company had to create large stockpiles of dirt on various jobsites to pull its equipment on top of to keep it out of harm's way. The company did not lose a single piece of equipment as a result of the disaster.

"Although we got back to work in a few weeks, obtaining diesel fuel was a real problem too," he added.

Griffith quickly identifies two keys to his company's success: the right people and the right equipment.

"We have a core group of people whose paths have crossed and we are fortunate enough to work together," Griffith said. "I have a high value and appreciation of people that have been around a long time, probably because I was only 27 when I started my company. I appreciate people that have seen it all and done it all."

Gary Sundstrom, vice president of estimating and project management, has over 40 years of construction experience and has worked in the Greater Houston area for 36 years.

Louis Evans is project manager for Sonora. He has been in the development industry for 40-plus years and has worked on some of the largest residential development projects in Texas.

"All of them are key to our success," Griffith said referring to the Sonora team including a tandem of dedicated field superintendents and a talented administrative leader taking care of business matters in the field and office.

"I try not to spend too much time in the trenches," Griffith noted. " The Lord has blessed me in many ways and one of the biggest has been pairing me with the right people in the right key roles at the right time. It gives me the ability to see the big picture and fine tune our operations, which is what an owner should be doing."

"To make our formula work, we need to move a lot of dirt," Griffith repeated more than once.

And to do that Sonora needs equipment, "but not just equipment," he says.

"The whole idea of deciding what piece of equipment to buy is a two-pronged process," Griffith explains.

"While I have full confidence in Bell Trucks and Hyundai excavators stand alone, when you combine that confidence with the service and maintenance I get from Four Seasons Equipment, that combination is really unmatched."

Sonora's fleet of 21 off-road dump trucks and 9 excavators is made up entirely of equipment manufactured by Bell and Hyundai and distributed and serviced by Four Seasons Equipment. The company also utilizes 15 dozers.

"We started doing business with Four Seasons in 2010, and we began with just renting trucks," said Griffith. "Now our fleet is fully leased or owned.

"They saw our potential early on," Griffith added. "They've proven to be a great equipment partner in that they have always responded to our needs. Whether it is service, repair or new equipment, they are there when we need them.

Kevin Phillips, the Four Seasons representative that works closely with Sonora, said the relationship between customer and dealer goes back at least a decade.

"Brittain was working on a project in the early days of Bridgeland," Phillips said. "I rented him two haul trucks. The rest is history. The first leased piece of equipment we delivered to Sonora was a Bell B35D truck. Now they are one of the largest dirt moving contractors in Houston, and one of my largest customers.

"We've sold more Bell Trucks to Brittain than anyone else and more Hyundai 480's too," Phillips added.

"Kevin is our go-to guy," Griffith said of Phillips. "We appreciate the help of Mitch, (Mitch Nevins, CEO of Four Seasons Equipment and Bell Trucks America) too. They treat us very well."

Phillips says Griffiths' team performs like the top-tier contractor they are. "When they start a job, they hit it with full force. He depends on us to minimize down-time."

Apparently, Phillips and his company are doing its job.

When asked to summarize his success, Griffith could not leave his equipment partner out of the equation.

"We are a very high-volume off-road dirt mover," Griffith said. "We beat the hell out of this equipment. That's why the right equipment coupled with outstanding service is so important. That's the only way I have figured out how to be successful." CEG