There are 21 Bell off-road dump trucks on the site, along with seven Hyundai 480 excavators and 10 dozers.

A Houston-area contractor is moving 2.5 million cu. yds. of dirt on a Howard Hughes Company project in Cypress, Tex.

The $10 million project will create a 2-mi. long mitigation lake system and about 300 acres of future residential lots and common areas in the Bridgeland Subdivision, an 11,000-acre, master-planned community that will eventually be home to 65,000 people northwest of Houston.

Sonora Construction expects to complete the 400-day contract in only 180 days, according to company President Brittain Griffith. 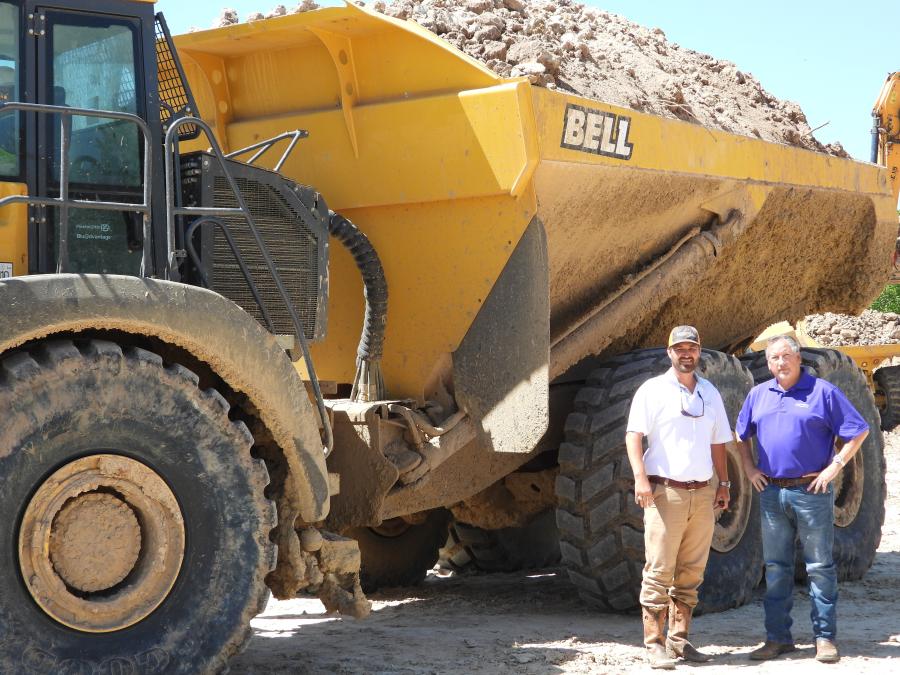 Brittain Griffith (L), president of Sonora Construction, said he relies on the high level of service provided by Four Seasons Construction and their representative, Kevin Phillips.

"We bid on most every decent earthmoving job in this part of Texas," Griffith said, as this is one of the biggest in several years. "It is probably the largest off-road earthmoving job currently in the Houston area".

Griffith, who said, "moving a lot of dirt in a short amount of time" is what his company is all about, attributes being ahead of schedule to a host of factors.

"We have had everything come together on this project," Griffith said. "We have a great team on site, good weather and a very good engineer and developer. The developer, The Howard Hughes Company, also developed The Woodlands, north of Houston, and the Las Vegas suburb of Summerlin."

Griffith said the right equipment was absolutely critical to Sonora's success on the job, as well.

"Kevin Phillips and the team at Four Seasons Equipment have been key on this job, as they've kept our down time at an absolute minimum," Griffith added.

Griffith is bullish on Bell Trucks. "We have demo'd other manufacturers' trucks. People want our business. But when you compare the actual machine and who we deal with for service, if there is an issue on the job, nothing compares favorably."

The 40 or so machines on the job site have consumed about 4,000 gallons of diesel fuel per day, according to Griffith. He credits Whitener Fuel Services of Conroe, Tex. with keeping a constant supply of fuel available.

Bridgeland Community is an 11,401-acre master-planned community under construction in unincorporated Harris County, Tex. to the northwest of Houston between U.S. Highway 290 and Interstate 10.