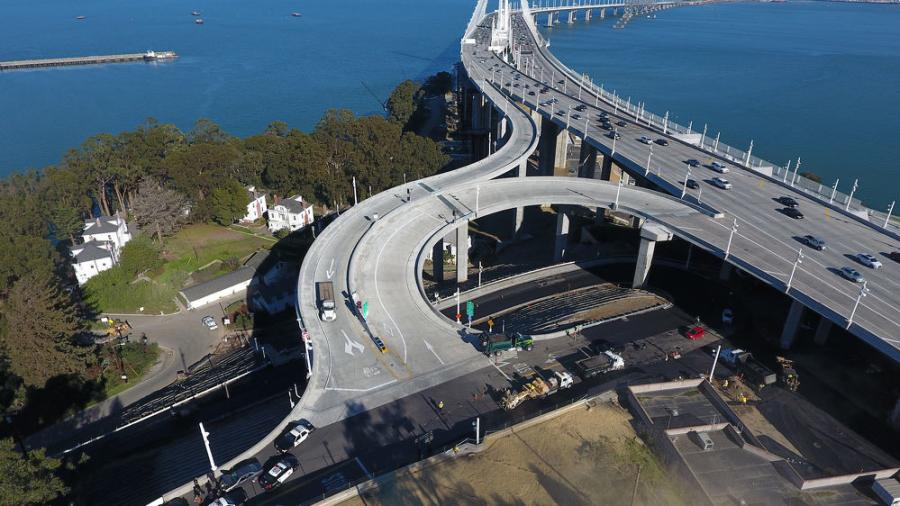 The purpose of the project is to increase the vertical clearance to the design standard of 16 ft., 6 in. on six bridges that cross over Interstate 80 (I-80).

The California Department of Transportation (Caltrans) is spending $30 million via the I-80 Six Bridges Project to increase the vertical clearance to the design standard of 16 ft. 6 in. on six bridges that cross over Interstate 80 (I-80) in the city of Vallejo just north of the Carquinez Bridge.

The bridges go in a northerly direction over I-80, which is officially designated as westbound/eastbound route, but travels north and south within Vallejo: Magazine Street, Benicia Road, Georgia Street, Springs Road, Tennessee Street and Redwood Street.

To date, Brosamer & Wall has completed the work on the Springs Road, Magazine Street and Benicia Road bridges and currently is focusing its efforts on the Georgia Street and Tennessee Street bridges. 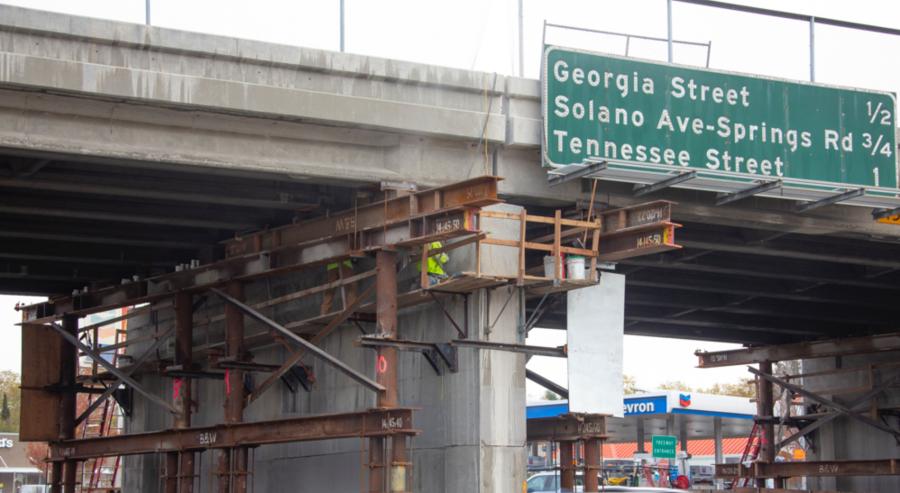 "These bridges were originally built in the 1950s and 1960s and then retrofitted over the years," said Danielle Des Champs, B&W's project manager. "Crews run into differing site conditions that were not shown on the as-builts and not able to be seen until after a bridge is closed. Each bridge has had issues that needed to be addressed before the bridge could be raised. Because five of the six bridges are constructed similarly, Caltrans and Brosamer & Wall were able to take unforeseen conditions on the first bridge and anticipate them at the remaining bridges.

"For example, existing girder embeds required additional bearing pads at five of the bridges," she added. "We were able to take bearing pads originally ordered for later bridges and use them at the early bridges, allowing time to procure additional bearing pads without delaying the project. Each bridge so far has been completed in less time than the previous bridge as crews repeat the same sequence of work and become more efficient."

"Some challenges remain the same at each bridge, such as limited hours at night for jacking activities," she added. "Crews utilize checklists to ensure key equipment and material is on-site and ready when needed. The amount of time for set-up and clean-up actually exceeds the time spent jacking."

The key equipment for jacking is the Enerpac EVO synchronous lift system, model 1240460, used in conjunction with double acting, locking, 150-ton jacks, HCRL-1508 and stroke sensors. The equipment was purchased through Zemarc Corporation, which helped to coordinate on-site training by Enerpac representatives. 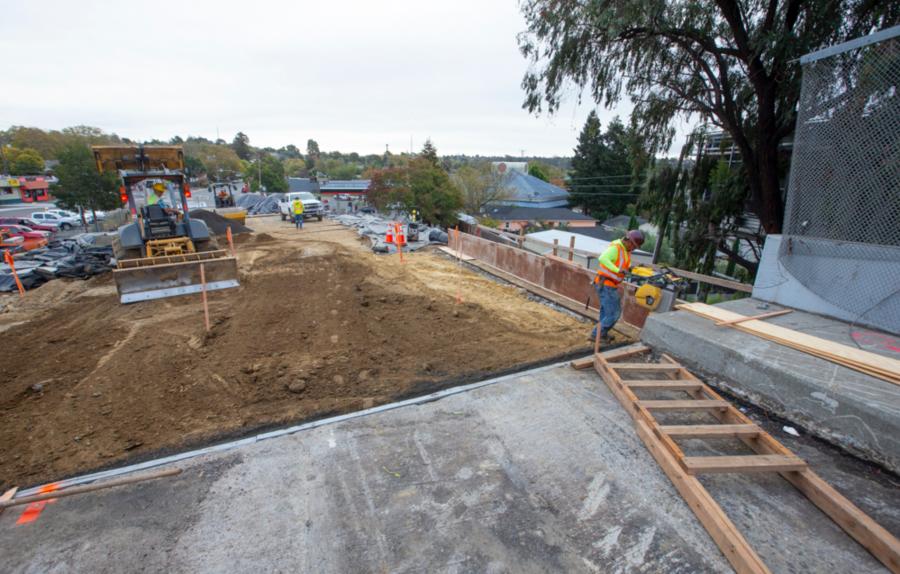 There is nothing "routine" about the work.

"This project is unique in that the overall quantity of certain items seems like a typical job, but that a small amount of everything is done six separate times," said Des Champs. "Certain subcontractors have to return two or three times for each bridge. This requires a lot of coordination between the different crafts, subcontractors and suppliers to meet the four-month timeframe."

Raising a bridge gives crews an opportunity to examine the structure and effect repairs.

"When the bridge is raised, new supports are constructed on top of the abutments and bridge piers and tied-in to the existing concrete," said Des Champs. "New bearing pads are installed, the deck is rehabilitated as needed, and approach slabs are added to tie the new roadway into the raised bridge."

Contractors are working within limited space at most of the bridges.

"The field office is located a few blocks away and a staging area at one bridge will be reused for multiple locations," said Des Champs. "Crews are working on the top portion of embankments while the bottom is in someone's backyard. Over the years, the right-of-way had become unclear and sometimes driveways, patios, private landscaping and fences were built within the project limits. Work underneath the bridges is accessed from the freeway lanes at night, with limited clearance and hours.

"While one bridge is closed to traffic, we start the work underneath the next bridge to get it ready to lift," she added. "We set k-rail, crash cushions and the temporary supports working on the freeway at night. Then once the bridge is closed, we have fewer activities left to do. This allows us to minimize the time between closing and jacking a bridge."

As noted, a typical bridge takes about four months to raise.

"Once the bridge is closed, the first activities are to remove the asphalt paving from the deck and perform any demolition or sawcutting required to free the structure from its supports and from adjacent spans," said Des Champs. "The bridge is temporarily raised above its final position, and then the top surface of the existing abutments and bents are prepped for reinforced concrete extensions to permanently support the girders. While the bridge extensions are worked on, separate crews reconstruct the embankments and approaches to tie the roadway into the new bridge profile.

Safety is a constant for the crews.

"The freeways are completely closed to traffic during the jacking activities, and vehicles are detoured around the area," said Des Champs. "Caltrans coordinates CHP units through Construction Zone Enhanced Enforcement Program [COZEEP] to ensure no vehicles enters the freeway work areas. The bridges are fenced off and a shuttle is used to transport pedestrians and bicyclists around the work site. Despite this, crews are briefed to expect vehicles entering the work zone and to create buffer zones with equipment."

On peak days, there are 35 Brosamer & Wall and subcontractor employees on-site, with the key subcontractors being O. C. Jones & Sons for asphalt paving; Highway Electrical Contractors Inc. for electrical and signal systems; Penhall Company for bridge demolition, sawcutting and coring; and CMC Rebar for reinforcing steel. 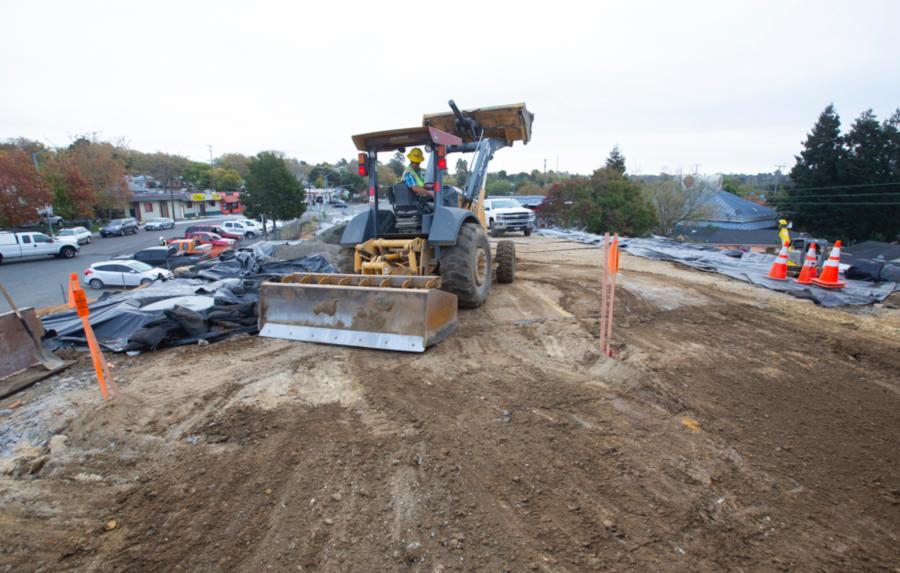 "Concrete, steel and asphalt are being recycled off-site," said Des Champs. "Lead-contaminated soil is taken to hazardous waste facilities and the rest of the soil is being reused on site."

"Because each bridge is unique in the amount of and work that needs to be done and access," said Des Champs, "the equipment rental companies have been helpful in supplying a large variety of equipment sizes and being flexible as the project requires."

"Each bridge will be completely closed to local traffic for four months of construction, day and night," said Pedro Quintana, Caltrans public information officer of District 4. "Caltrans Bay Area understands that this is an inconvenience to residents and businesses in Vallejo but we have done an extensive outreach campaign to help prepare them for this closure, including providing a 24-hour shuttle for pedestrians to safely cross.

"Once all six bridges meet the latest standard vertical clearance height, it will accommodate large commercial permit vehicles, so they can continue to safely move freight through I-80, a major freight corridor connecting San Francisco Bay Area to the regions in the north," he added. "Doing this work now ensures the continued safety of the bridges and prevents the need for more comprehensive and disruptive work in the future."

The work also includes beautifying the area, leaving each overcrossing looking better than it was before, improving the approaches to each overcrossing and collaborating with the city on local road improvements.

The project was designed by Caltrans Bay Area-District 4.

"The public has been receptive to this project," said Quintana. "Our outreach campaign includes various public meetings, a project hotline, and working with our local agencies, for example the Vallejo Chamber of Commerce." CEG