Brown Transportation Chooses Kenworth T880s to Get the Job Done 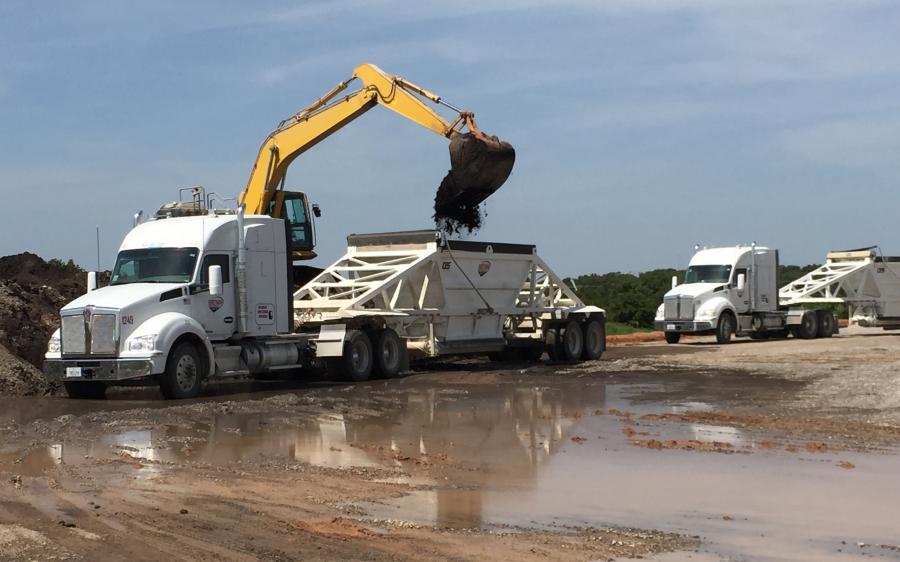 “We have 11 pneumatic trailers and provide sand for the oil industry in fracking operations, Brown said. "But that business can go up and down – it's soft right now. So, we switch over to highway construction, delivering aggregate and rock in our belly and end-dump trailers.

Wayne Brown started in the construction industry 43 years ago. His first job was as a truck driver for his family-owned aggregate hauler and he enjoyed his time behind the wheel. "I drove the traditional high hood," he said. "I was always very fond of the look."

So, it wasn't surprising that when Brown bought his own rock/aggregate hauling operation in 2010 from his uncle, he went with the big hood, to join others in the fleet.

According to Brown, the company operated 24 trucks when he purchased the Oklahoma City-based company. "Now we're up to 80 trucks," he said. "And we've made the transition from the high-hood to the Kenworth T880 with the PACCAR MX-13 engine. That decision is really paying us back. We're getting up to 1.5 mpg improved fuel economy*, and the trucks weigh in at nearly 900 pounds lighter. When you run fully loaded with between four to 10 runs per day to a rock crusher, that extra payload really adds up."

Brown Transportation's operation is a little unusual in the aggregate business. "We're very diverse, which helps us weather any changes in the business climate," Brown said. "We have 11 pneumatic trailers and provide sand for the oil industry in fracking operations. But that business can go up and down – it's soft right now. So, we switch over to highway construction, delivering aggregate and rock in our belly and end-dump trailers. And since we're a large aggregate hauler in our region, we can handle jobs others can't. It's not uncommon for us to get a call requesting a large delivery – due to our size, we can put more trucks on the job and complete a project in one day, versus three for our competitors."

Another competitive advantage for the company is its decision to spec the Kenworth T880s with the 52-inch mid-roof sleeper. "On our 43 T880s, we're running the 52-inch mid-roof sleeper," Brown said. "While our headquarters are in Ardmore, we have our trucks domiciled in Krum, TX, and in Davis, [Okla.], and Oklahoma City. On a Monday, the trucks might have a job 100 or more miles away, so they'll work that site all week – making runs to a crusher or pit nearby. It doesn't make sense to deadhead back to our facility every day. So, that's why the need for a sleeper. And this size gives our drivers the comfort they need, plus it's tall enough so they can stand inside the sleeper."

Brown Transportation's T880 52-inch mid-roof sleepers feature a liftable lower bunk with a comfortable 32-inch by 80-inch pocket coil mattress and storage underneath. There also is upper storage on the sleeper's back wall, including a place for drivers to hang their clothes and jackets.

On average, Brown's T880s average around 100,000 miles per year. "With the fuel savings we're seeing with the T880, it means each truck is saving us close to $10,000 in fuel per year," he said. "That factors into our total cost of ownership. We also look at cost of operation – and the T880s have been very reliable. Since we pay our drivers a percentage of the load, they have as much riding on the deliveries as we do. We expect our Kenworths to perform and we haven't been disappointed."

One spec change the company recently made was the move to the Eaton UltraShift(R) transmission and disc brakes. "Our more senior drivers were used to driving 13 and 18 speeds and voiced concern when they heard we were switching to an automated manual," said Brown. "But, now, you couldn't get them out of the truck – they'd never go back to a manual. They're no longer using their left foot and right hand all day long shifting. They're less fatigued at the end of the day."

Helping even further, said Brown, is the quietness of the T880. "That PACCAR MX-13 engine (rated at 455 hp) is so quiet," he said. "There is a big difference compared to the other engine we were running."

Brown also said the trucks bring a sense of pride to his drivers. "We make sure the trucks are washed – even the engines – every two weeks. One of my pet peeves is I like to have a nice looking fleet, so every other Monday, our drivers climb into a truck that looks brand new. I like it and they like it. And they in turn take better care of the trucks. We really have a special relationship with our drivers. We're family-owned here too – my son Chad is vice president of operations, and his wife, Sara, is our CFO. We're small enough where we know everyone and have a true family culture. That, along with our equipment, helps keep our driver turnover significantly lower than others in our industry."

*Individual fuel economy improvement will vary depending on use, road conditions and other factors.