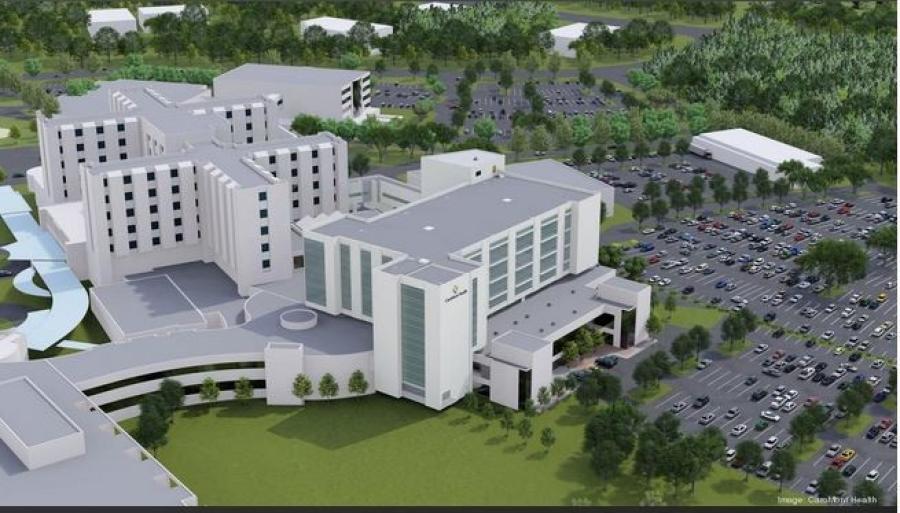 Construction has begun on a critical-care tower at CaroMont Regional Medical Center in Gastonia, N.C., west of Charlotte.

The 146,000-sq. ft. tower will have four floors, each with 26 private intensive-care rooms, centralized nursing stations and administrative workspace. Three floors will be available for immediate use, while the fourth one can be used for future projects.

North Carolina regulators approved the project in January, which is expected to cost approximately $90 million.

Critical care involves seriously ill patients with life-threatening conditions. The new tower will be to the right of the main tower at CaroMont Regional. It will be on top of the main location for operating rooms. CaroMont said planners had designed for a future tower when building the hospital about 50 years ago.

The Charlotte office of Robins & Morton Construction is the tower project's general contractor. McMillan Pazdan Smith in the Queen City is the architect.

The new hospital tower is set to open in early 2023.

"Coupled with the projected growth of our community and the advancing age of our patient population, the need for hospital-based care continues to rise," Peek said in a statement.

The new critical-care tower is part of a larger $350 million investment into Gaston County. CaroMont announced the five-year investment in May 2019, which includes not only the new tower, but medical offices and a new hospital in the town of Belmont.

CaroMont plans to build that $196 million-plus, 66-bed hospital beside Belmont Abbey College and near the intersection of NC Highway 273 and Interstate 85. The project got a push forward in late August when CaroMont signed a lease with the Southern Benedictine Society of North Carolina to partner with the college to add health-care courses.

CaroMont Regional Medical Center-Belmont also will come with an emergency department, operating rooms, a labor and delivery unit and imaging services. Construction is scheduled to begin in April.

As part of its five-year investment in the county, CaroMont opened a 5,000-sq.-ft. urgent care in mid-July in Belmont. The health-care system also added a 15,500-sq.-ft. primary-care office in nearby Cramerton in February.

CaroMont has 4,300 employees and providers and logs nearly 250,000 patient encounters each year. The medical center is a 435-bed hospital — the fifth largest in the Charlotte region.