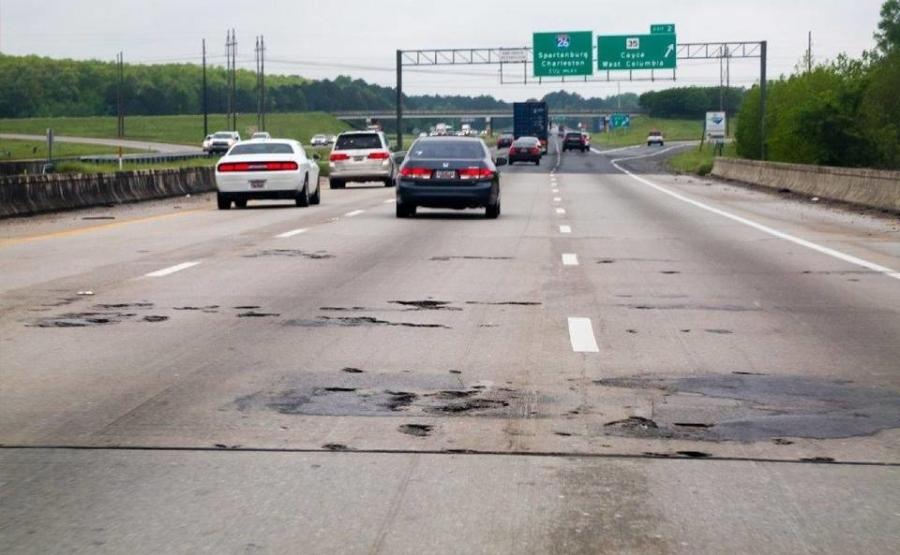 Transportation Secretary Christy Hall has said the roads are so decayed, drivers probably won't even notice the $1.4 billion last year's law provides for pavement resurfacing over a decade, as it will essentially keep pavements in their current condition. http://url.ie/11o6r

Business leaders are again pushing the Legislature to fix South Carolina's crumbling roads, saying it's time to “finish the job' by passing a long-term funding solution or risk losing jobs to other states.

The state chamber of commerce praised House leaders' latest plan, introduced Wednesday, estimated to pump an extra $600 million annually into roadwork once it's fully phased in over five years. A Senate proposal, pre-filed last month, would raise an estimated $800 million annually after a three-year phase-in.

Chamber members said they support either amount and leave the details to lawmakers, as long as the result is a reliable, consistent stream of money. The business group has long called for at least $600 million extra annually.

“If you do any less than that, you're not making the system any better. You're just maintaining the current decay of the system,' Ted Pitts, the chamber's president and CEO, told The Associated Press.

While Pitts applauded road-funding laws passed last year and in 2013 as a start, another borrowing bill won't cut it, he said.

“If you're a contractor, you can't plan. If you're the DOT, you can't manage a system where every decade you get a little bit of money to do more work,' he said. “We've got to finish the job.'

Neither came close to the $1.5 billion annually over several decades the DOT has said it needs to bring the system to good condition.

Transportation Secretary Christy Hall has said the roads are so decayed, drivers probably won't even notice the $1.4 billion last year's law provides for pavement resurfacing over a decade, as it will essentially keep pavements in their current condition.

“If infrastructure continues to deteriorate, it can become a substantial roadblock to bringing more business in,' said Jack Sanders, CEO of Hartsville-based Sonoco. His company estimates the state's poor roads cost it $5 million yearly in truck damage and additional time due to re-routing.

Barbara Melvin, a vice president of the State Ports Authority, said bad roads could cause the state to lose business to other ports.

“Cargo flows mainly based on inland costs,' she said. “So if transportation costs are affected by congestion or lack of capacity on the interstates, it makes you less competitive.'

Legislative leaders have said repeatedly they recognize the prior laws only jump-started road improvements.

The latest House proposal would raise the state's gas tax — now the nation's third-lowest at 16 cents — to 26 cents per gallon over five years. It would increase the vehicle sales tax cap to $500, meaning most drivers would pay an additional $200 in taxes at the dealership, and raise the biennial vehicle registration fee by $16. It also creates several fees: a $250 one-time vehicle registration fee for people moving to South Carolina, $60 and $120 biennial fees on hybrid and electric vehicles, respectively, and a tax on out-of-state truckers, based on the miles they drive annually while passing through South Carolina.

House Speaker Jay Lucas, a sponsor, said it ensures everyone who drives on South Carolina's highways helps “foot the bill to repair our crumbling infrastructure.'

Two cents of the gas tax increase would pay for safety improvements that Hall said are a top priority. With 979 traffic deaths, 2015 was the state's deadliest year, data shows.

It will take $50 million a year over a decade just to make the state's “worst of the worst' stretches safer. Improvement along those 1,900 miles, mostly in rural areas, include guard rails, rumble strips, wider road shoulders, paving shoulders and better pavement markings, Hall said.

“South Carolinians have demanded state government fix our dangerous roads,' Lucas said. “Not only is this issue directly tied to the safety of our citizens, it also poses the greatest threat to job creation and economic growth in South Carolina.' —AP