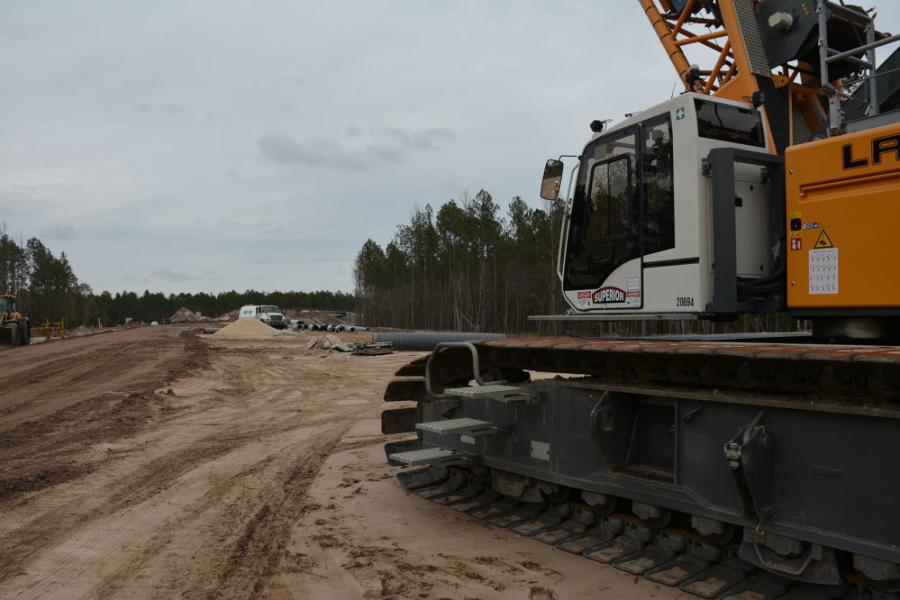 The area required substantial excavation of subsoil, which was removed and replaced with suitable material.

The Florida Department of Transportation's $60 million Baldwin Bypass project in the town of Baldwin, Duval County, is an ambitious attempt to relieve traffic congestion by constructing a 4-mi., four-lane highway and three overpasses that cross CSX railway tracks.

Superior Construction Company started the work on the divided highway in March 2016, having been awarded the project in November 2016, and its crews are making steady progress as they work towards a spring 2020 delivery date.

The three CSX overpasses are the east-west, 256 ft. long; the north-south, 311 ft. long; and the Jacksonville-Baldwin Rails Trail, 159 ft. long. All are two lanes in each direction. The work zone extends from north of the I-10 bridge over U.S. 301 to the newly constructed SR 201. Also to be built are two new signalized intersections at Brandy Branch Road and Beaver Street (U.S. 90). 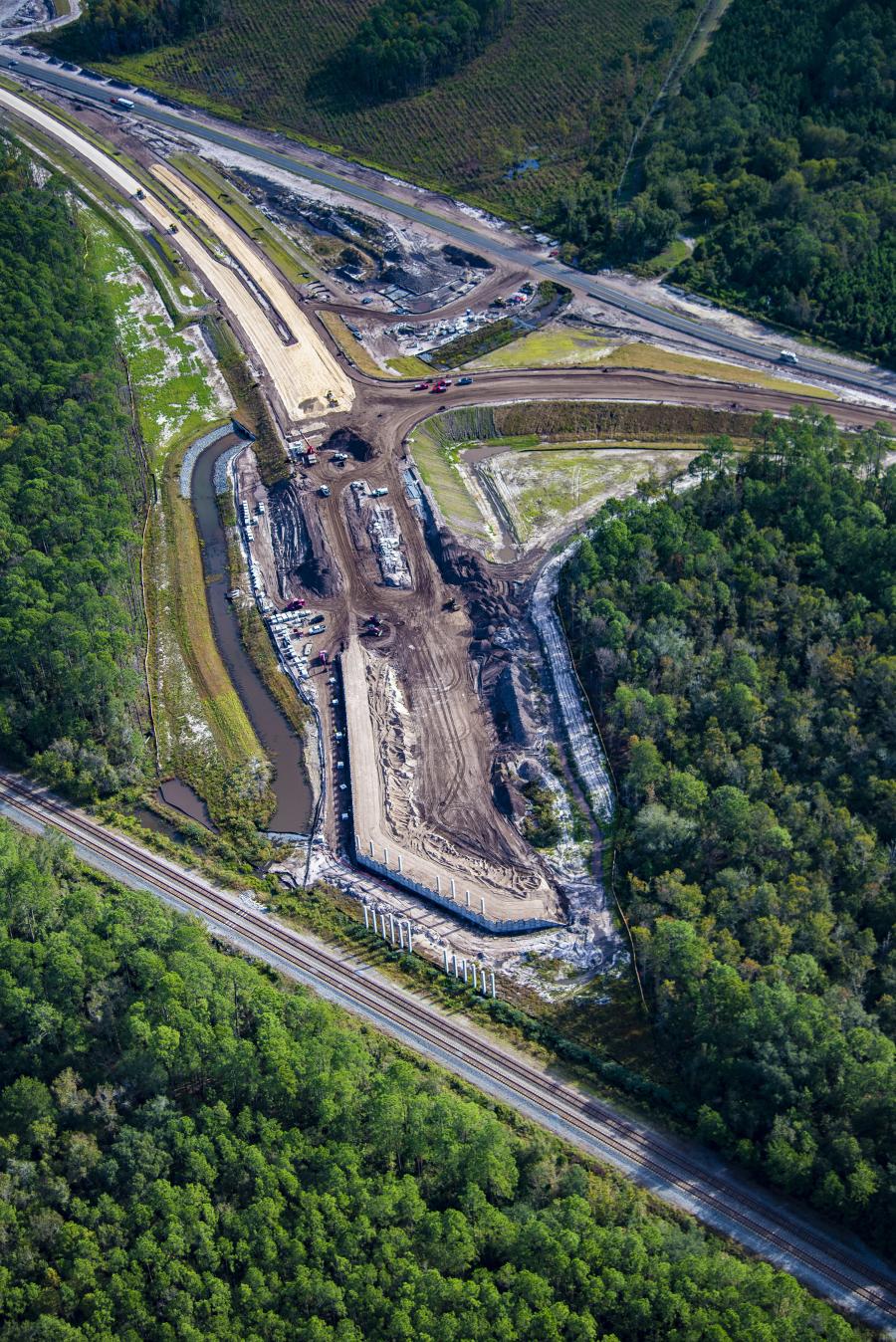 "The bypass will relieve traffic congestion and improve operational efficiency of U.S. 301, which is part of the National Highway System and Florida's Strategic Intermodal System (SIS)," states the project web page.

The Baldwin Bypass project is the construction of a brand-new 4-mile road," said Bianca Speights, FDOT's spokesperson. "The project will essentially reduce traffic congestion on State Road 200 (U.S. 301) by providing a faster route for motorists choosing to avoid train delays. The department expects traffic flow to improve on State Road 200/U.S. 301 in Baldwin. Commercial vehicles will not be banned from traveling through the town as part of this project. All motorists will have a choice to utilize the new bypass or travel through State Road 200 in Baldwin."

The bypass is designed to accommodate 20,000 vehicles per day, with approximately 25 percent of those vehicles being semi-trucks.

"The key factor in the successful delivery of this project, was the constant coordination between the department and the multiple stakeholders involved, which included the city of Jacksonville, town of Baldwin, Florida Greenways & Trails, CSX, Southern Wood Piedmont and multiple utilities companies located within the corridor," said Speights. "Approval of the design at the grade separated crosses of the two CSX crosses and the Rail to Trail was key in delivering the project on time for construction to begin. Ongoing roadway projects on each end of the Bypass required the design to remain fluid as future plans and site conditions changed.

"The overpasses were a conventional design consisting of precast Florida I-beams (FIBs) with a concrete deck, which provide an economical, durable and reliable product that will serve the traveling public for many decades to come," she added.

Poor soil conditions existed within sections of the bypass corridor, particularly north of U.S. 90. "Most areas were shallow and able to be removed and replaced with suitable material," said Speights. "However, some isolated areas existed that required alternative design and construction activities. These areas were addressed by using a surcharging technique, which required additional fill to be placed and monitored for settlement until the area was determined by the engineer that construction activities could resume."

Well-attended public consultations on the proposed construction were held in 2017.

The Baldwin Bypass has minimally impacted traffic, and only single- and shoulder-lane closures have been implemented.

For the 2019 construction season, the plan is to complete all of the bridges, embankment and drainage; begin concrete pavement at U.S. 90 and the south end of project; and continue with stabilized subgrade, limerock, and asphalt paving on SR 201 while completing the lighting installation. 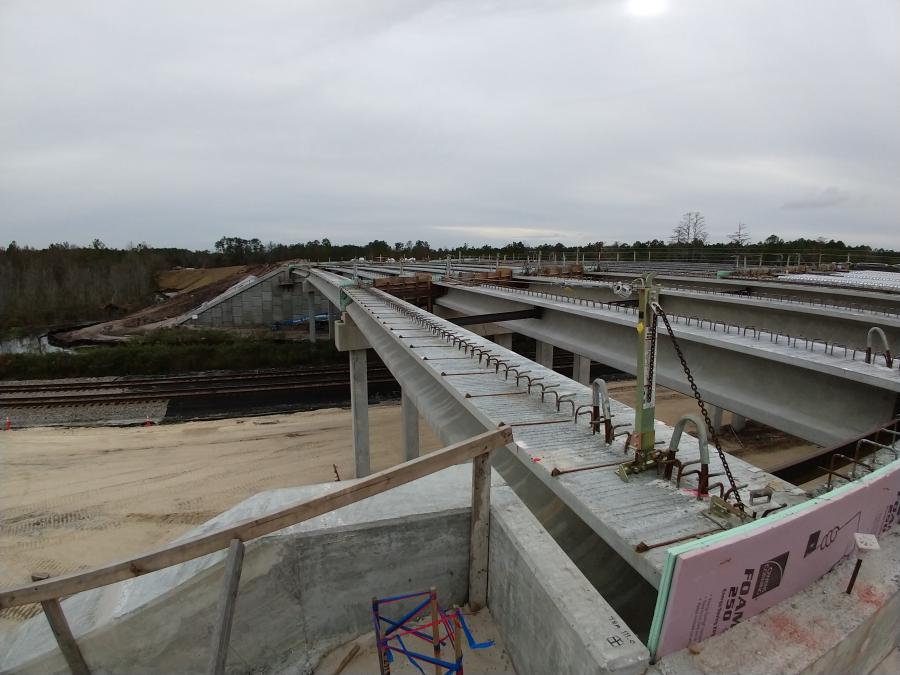 "One of the challenges we have encountered is constructing the bridges over the active CSX railway tracks," said Michael Baldwin, Superior's project manager. "We coordinate and schedule closely with CSX to mitigate any costly delays. Constructing the main stretch of roadway through the middle of the project has proved challenging due to the amount of rainfall the project has received this past year. This area also requires substantial excavation of subsoil that is to be removed and replaced with suitable material. This type of work requires dry weather, so we continue to monitor the forecasted weather and schedule work accordingly.

"We are permitted to work both day and night shifts, but primarily work during the day to minimize disruptions to the traveling public," he added. "As far as project preparation, we had sufficient time to plan the project, but it's common with any large-scale construction project that unexpected issues will arise. Crews are able to work at multiple sites and are allocated to various areas of the project depending on the schedule's critical path."

Relocation of utilities, performed by other parties, was scheduled prior to the start of construction.

"We will be installing lighted signalized intersections at the south end of the project near I-10 and the intersection of SR 201 and U.S. 90," said Baldwin. "Space gets limited as construction progresses, so we schedule material deliveries accordingly to make sure we make efficient use of the limited space. Lessons learned from previous projects include always plan ahead, and subcontractor management. These are two things that are invaluable to keep the project on schedule.

"It's a team effort between Superior, FDOT and the CEI firm so we all work together to resolve any potential issues as it's in the best interest of the project. One of the changes to the project we proposed was an alternate detour design for the north end of the project to expedite the construction time." 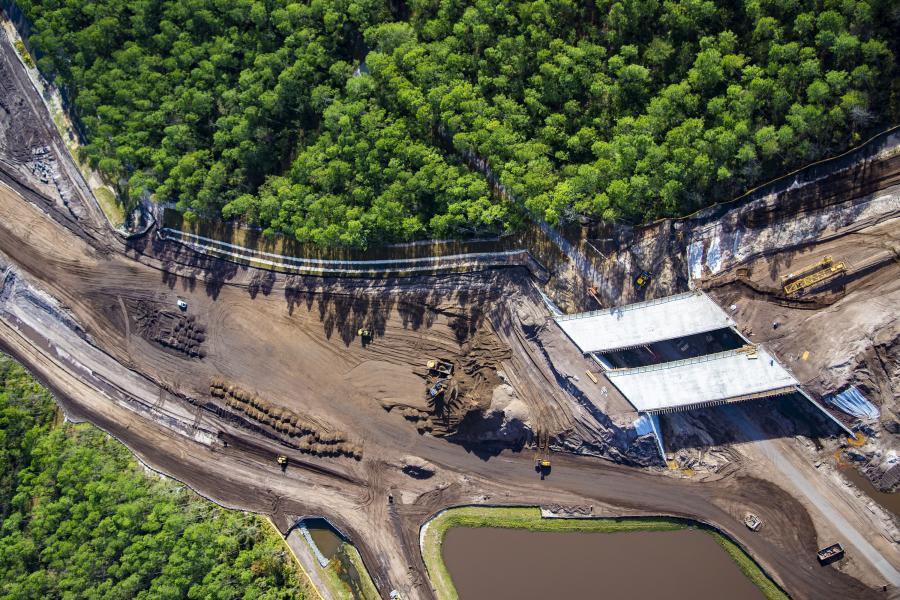 The road work began where I-10 and the bypass intersect.

"Once clearing was complete, we started on the embankment right away due to the amount that is required for this project," Baldwin said. "Typically, it takes a couple of months to get the clearing and grubbing crews far enough ahead so that we can begin our road work. Wet site conditions always pose challenges for these types of construction projects."

GPS-equipped equipment is being used to ensure the grading was correct.

"GPS-compatible equipment is becoming the industry standard, and we utilize as much as possible," said Baldwin.

The earthwork operations saw the placement of 2 million cu. yds. of embankment fill.

"We utilize as much suitable material as possible and anything unsuitable is hauled off site," said Baldwin.

"Both sides are being constructed simultaneously" said Baldwin. "We run several construction crews to try and stay ahead of schedule. Depending on the weather conditions, it can take several months to complete sections of the roadway."

Crews are working on all three overpasses simultaneously.

"The work is on schedule," said Baldwin. "The plan was to start on drainage and embankment as soon as the tree clearing was completed. Also, we got started right away on the bridge substructure while the weather was favorable. As far as working with CSX, we provide CSX officials schedule updates to make sure both entities are on the same page. We abide by CSX rules and regulations and suspend work when requested. Barriers are installed to prevent any potential falling debris onto the track."

"We provide them schedule updates as work progresses," said Baldwin. "Some subcontractors are new, and some are old." 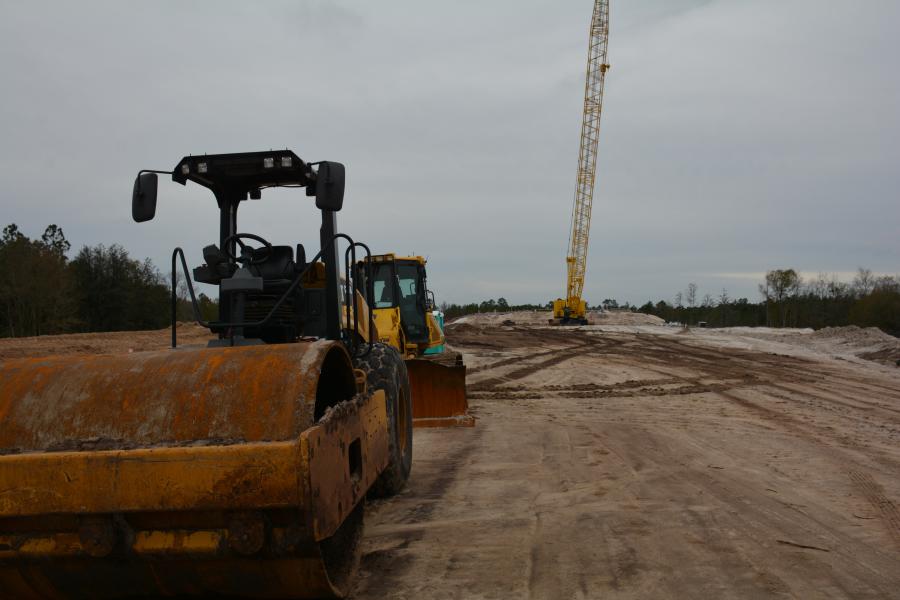 "Wet and muddy site conditions are harsh on equipment, typically wearing out tracks and other mechanical parts," Baldwin said. "Routine preventative maintenance is key to keeping equipment up and running."

"Rental companies help to provide services for repairs and maintenance that we take advantage of in order to keep the equipment up and running at all times," said Baldwin. "We expect timely service when needed, and they expect us to take care of their equipment."

With about 18 months to go before completion, Baldwin has no doubt that his crews will meet all the benchmarks.

"The crews are excited to see the finished product," he said. "It's rewarding to be on a project from beginning to end and watch the employees grow. We continue to evaluate and promote employees. Open communication between the project management team and the field crews is important to keep everyone safe and improve efficiency."