The visit, which was years in the making, was orchestrated by members of the Association of Equipment Manufacturers (AEM). 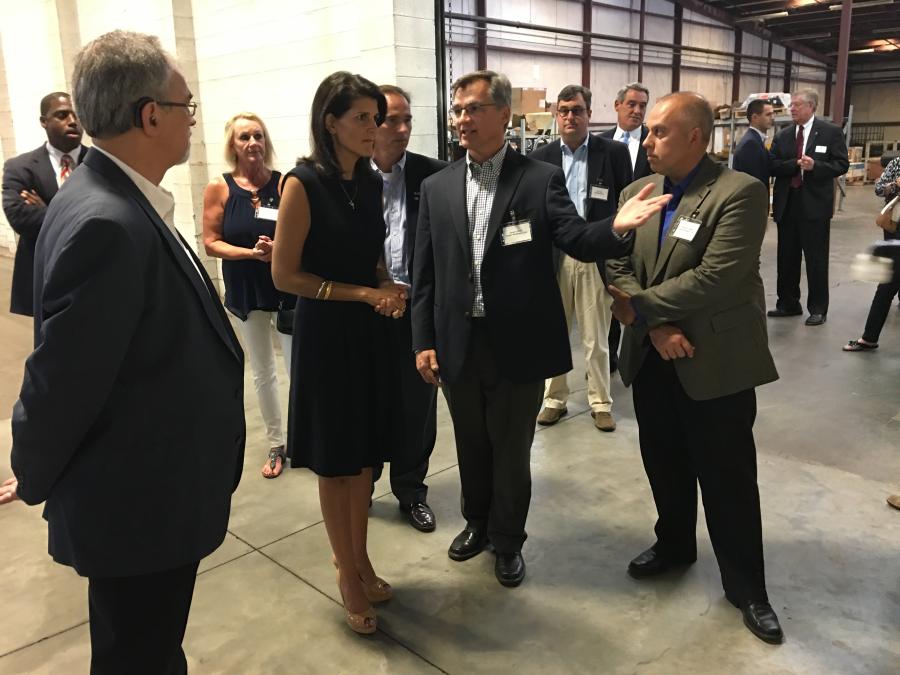 David Calder points out a few of their manufacturing techniques to Gov. Nikki Haley.

The visit, which was years in the making, was orchestrated by members of the Association of Equipment Manufacturers (AEM), including Glen Calder, vice president of administration and manufacturing of Calder Brothers, who also sits on the government and public affairs committee of the AEM. In addition, local and statewide business owners and Calder Brothers employees attended the governor's visit.

Her stop at Calder Brothers, which employs approximately 75 people, served to address infrastructure and manufacturing jobs in the state.

Speaking with attendees, Haley praised South Carolina firms, including Calder Brothers, which she said, produces quality products and is responsible for a portion of growth in the state.

During a question and answer session, she said growth in the industry exemplifies the need for infrastructure improvements throughout South Carolina and the need to reform the SCDOT's system used for prioritizing these projects.

“The interesting thing about infrastructure is that we very much realize roads are a problem in South Carolina,” she said. “This year, the initial projections show we are going to have $500 million in new money … so, there is a lot of money floating around. The problem, and the reason you are not seeing roads repaired in South Carolina, is the structure. We have to fix the system.”

“We have pushed very hard to make it a cabinet agency … to at least let the governor appoint the commissioners so that we have a state plan,” she said.

Haley asserted that funds are being used inappropriately for nonessential projects, rather than more urgent ones, such as pothole repair, interstate highway widening and deteriorating bridges.

One particular example she pointed to was when commissioners held a recent meeting to determine where a $30 million grant for one congressional district should be spent. Some of the money went to a beautification project.

“The congressman gave all of his places for where he wants that money to go. Beautification, all around the state house, which I can tell you we don't need — planting of trees around S.C. state house. All these things, and not one pothole repair.”

She said that she hopes to continue to work with State Sen. Ross Turner (R, Greenville) to fix the current system.

“We need roads fixed,” Haley said. “I want to help you sell more of your equipment. We want to make sure you have more customers, and that's not going to happen until we get road reform.”

Reflecting on her speech, Glen Calder said that he thought Haley was doing a good job bringing attention to efforts to reform SCDOT, but that the current system puts her in a difficult position.

“The South Carolina model has her a bit handcuffed,” Calder said. “I think she gets a lot of the blame for the state of the infrastructure, but doesn't really have much control over what actually happens.”

Calder said Haley also addressed the shortage of skilled workers in the industry. He said that she has been working hard to make South Carolina a manufacturing-friendly state, and that she has been successful in her efforts to recruit businesses to the state.

The next step is workforce development.

“She travels around to see truck drivers, welders and machinists and said with those three trades, she can guarantee you a job when you get out, and a good paying job. If you want to go and spend upwards of $100,000 on a four-year education, she can't necessarily guarantee you there's a job for you when you get out,” said Calder.

Haley said the biggest obstacle to workforce development is two-pronged: changing the mindset of parents and the South Carolina department of education. Not every child is meant for college, and children are going because parents and educators feel it is best for the child. Meanwhile, high-paying jobs in the industry are left vacant because there are not enough skilled workers to fill them. Calder said Haley is working to fix the problem.

“She has been very active in supporting the community colleges with equipment and whatever they need from that standpoint, very much so,” said Calder

Calder said that he was pleased with the event overall. Before employees were treated to a group lunch, Haley posed for a photo in front of Mauldin equipment. She also received a special gift: A welded sculpture of a Yellow Jessamine, South Carolina's state flower, which John Craig, a longtime Calder Brothers employee, crafted.

Haley also participated in a tour of the facility, and stayed longer than her hour-long scheduled visit. Calder said that she was outgoing, friendly and positive with the employees.

“To my surprise, this visit was quite unique for her,” said Calder. “To watch an operator use a plasma-cutting table to cut metal underwater was fascinating to her. She stepped up and watched a vertical machining center making parts and was quite enthralled with that. I would say overall her visit was very engaging and positive. For our employees it was a tremendous morale booster to get the opportunity to meet the governor. It was wonderful.”