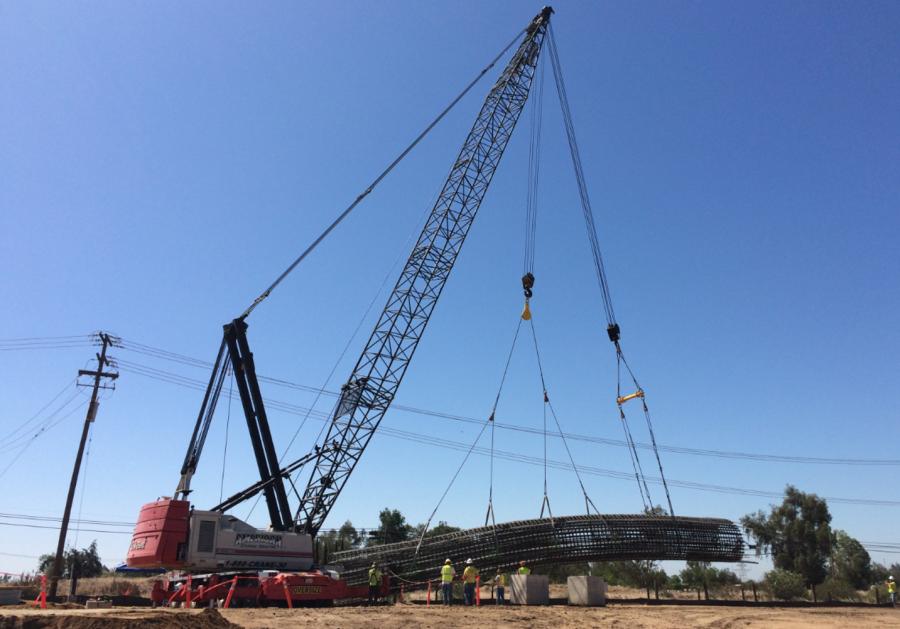 Viaduct construction in the Central Valley has kicked off an 800-rail-mile, 24-station, $68 billion California high-speed rail project. Support columns are rising where the bullet trains will whisk across the Fresno River in Madera. The viaduct stretches from Raymond Road to Watson Street, crossing State Route 145 and the river, and running parallel with the existing Burlington Northern Santa Fe railway track.

“Continued progress on the high-speed rail program is evident by the work being done today at the Fresno River Bridge,” said Jeff Morales, High-Speed Rail Authority CEO in a recent release. “Californians will continue to see more jobs and sustainable construction activity as we ramp up building high-speed rail in the Central Valley.”

The California High-Speed Rail Authority is the lead agency for planning, designing, building and operation of the high-speed rail project, which is the first such system in the nation. The project is expected to be completed by 2029.

Construction of the first viaduct began in June after several years of challenges from farmers who face loss of land and opposition forces opposed the high price tag of the project. Two more viaducts will be built along a 29-mi. (47 km) section from Madera south to downtown Fresno.

In addition to the viaducts, a dozen grade separations will be constructed. Grade separations are a means to avoid disrupting traffic flow on other transit routes when they cross each other. They normally consist of tunnels and bridges.

Along with the Fresno River viaduct, workers have begun work on rail underpasses at Tulare and Ventura streets in downtown Fresno, and at Highway 180 just east of the downtown area.

Construction crews will construct two additional viaducts in north Fresno, including one over the San Joaquin River. They will build a crossing over Golden State Boulevard, Cedar and North Avenues and at Highway 99.

Each construction phase is referred to by the rail authority as a “construction package.” A $985.1 million contract was awarded to package 1 low bidder Tutor Perini/Zachry/Parsons joint venture to construct the first 29 mi. stretch of the rail project from Avenue 17 in Madera County to East American Avenue in Fresno County. Tutor Perini/Zachry/Parsons operates out of Sylmar, Calif.

After the cages are inserted in the ground, concrete is poured into the cages and left to cure for approximately three days. The foundation must be strong enough to support high-speed trains traveling at speeds exceeding 200 mi. per hour.

About 86 million lbs. (39 million kg) of rebar will be used on construction package 1.

To build the foundation and construct the remainder of the viaduct, construction crews are using two 120-ft. (36.5 m) cranes, forklifts, loaders and drill rigs. The cranes are used for hoisting material at overpasses and bridges.

Approximately 20 craft workers dispatched from the trade unions are currently working days on site. Toni Tinoco, information officer at the California High-Speed Rail Authority in Sacramento, said she anticipates more than100 craft workers working on-site once construction ramps up. Shifts are typically during the day, Monday through Friday.

Construction of the Fresno River viaduct is expected to be completed by summer of 2016.

Meanwhile, work is expected to begin soon on project package 2-3, which is the Fresno-Tulare/Kern section of the high-speed rail project. The rail authority has awarded a $1.3 million contract to a group of companies — Dragados USA Inc. in Phoenix; Flatiron West in San Marcos, Calif.; and Shimmick Construction Co. in Oakland, Calif. Shimmick Construction has since left the team, but the remaining group is expected to finish the work.

Package 2-3 expands rail 60 mi. (96.5 km) and will include 36 grade separations, including viaducts, underpasses and overpasses in Fresno, Tulare and Kings counties. Looking further ahead, the initial operating section between Merced and the San Fernando Valley is expected to be complete in 2022.

Although high-speed rail project has begun, funding challenges remain. High-speed rail has about $26 billion earmarked for the project over the next 14 years.

That’s less than half the money needed to complete the project.

Still, organizers are confident the additional funding will be provided.

In published reports, Dan Richard, president of the rail authority board, said advertising and real estate-development rights along the route could provide large amounts of cash. Also the project is expected to receive a steady flow of revenue from the cap-and-trade program.

Money raised through the sale of carbon credits under California’s carbon-trading program is earmarked for projects that help the climate and the environment.

The high-speed rail project will include as many as 24 stations from San Francisco to Anaheim. Because of the length of the route and geographical differences, work is broken up into separate sections. Each of the sections will need individual Environmental Impact Reports completed before significant work can begin on the section.

Expected benefits from the project are contracts for construction firms and jobs work for the construction trade.

“Fresno is one of many areas that deal with significant unemployment rates,” Tinoco said. “But since the start of this project we have seen and heard numerous success stories of people being put back to work after years of being without a job or steady income.”

Travelers will be able to speed from San Francisco to Los Angeles in 2 ½ hours. And freeway traffic on Interstate 5 and Highway 99 through the Central Valley will likely ease some.

Some farms will be sliced in half by track construction. That has drawn opposition from farm organizations and many in the farm community. Also some farmers and business owners are opposed to giving up buildings and pieces of their land to eminent domain.

“The mission of the California High-Speed Rail Authority is to utilize as many local small businesses as possible,” she said. “The improvement of city infrastructure for many of these communities is also a priority.”

Tinoco said the right of way process in acquiring parcels for the project can sometimes take longer than some might expect. “But our team has been working diligently to move forward and meet project deadlines,” she said.