In 2016 Powerscreen marks half a century of serving the crushing and screening industry around the world. 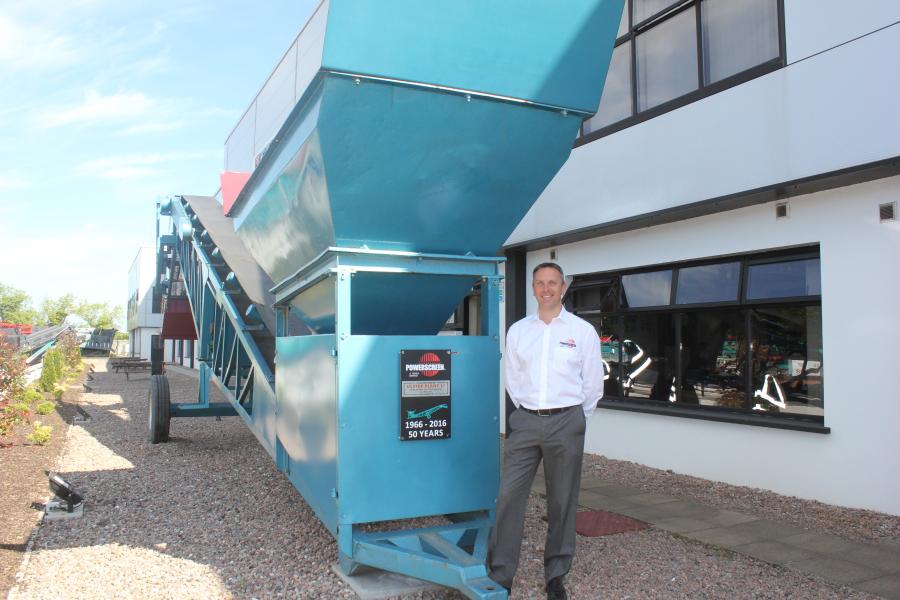 Colin Clements, global product line director, beside a 1966 MK1 screening machine. This was the sixth machine built and remains a permanent feature at the front of the Dungannon plant.

In 2016 Powerscreen marks half a century of serving the crushing and screening industry around the world. Established in 1966, Powerscreen has achieved its five-decade legacy through industry leadership, customer input and innovation.

Powerscreen was founded in 1966 under the name of Ulster Plant in Country Tyrone, Northern Ireland and today that is where the research, development and manufacturing of products continue. By the 1970's the Powerscreen name was born. When the founders set up Powerscreen in 1966 they pioneered the concept of mobile screening, taking the machines to the quarry face rather than the expensive process of moving the material to the machine. In 1969 Powerscreen exported its first machine to Sweden. Today Powerscreen has a true global presence, operating in worldwide scale in more than 80 countries. In 1966 Powerscreen employed eight people, now that figure has risen to 600 people producing a range of more than 30 machines.

Powerscreen started out from mobile machines in a sand pit to machine designs now serving quarry, mining, C&D and recycling industries globally. Powerscreen not only pioneered the mobile machine concept but also set new standards for many products and technologies that have become widely adopted in the industry, including the Chieftain and Warrior ranges of mobile screens. In 2015 Powerscreen launched the Warrior 600, making the Warriors the most comprehensive range of mobile scalping units in the industry, according to the manufacturer.

“From Ulster Plant to serving customers around the world today, Powerscreen is the story of teamwork. Our customers have trusted us and helped us to build and define the industry, as well as creating ways for people to work safely. It is through teamwork that we will continue to find new solutions and opportunities” said Colin Clements, Powerscreen product line director.

In the last 50 years, Powerscreen has gone above and beyond in its product development efforts, focusing on what customers need to be successful in their industries and applications — Powerscreen innovations are changing the market and setting the industry standard for quality, reliability and safety in crushing and screening equipment, according to the manufacturer.

Key to the success of the Powerscreen brand is the global distribution network — there are more than 120 distributors operating globally providing local service and support service to end users.

Pat McGeary, Blue Group chairman, said “Powerscreen is in my blood, I joined in 1968 when it was just a little local factory and today its part of my family's life. I am proud to have been part of the success story and to see the passion and dedication that was there when I joined is still there today.”