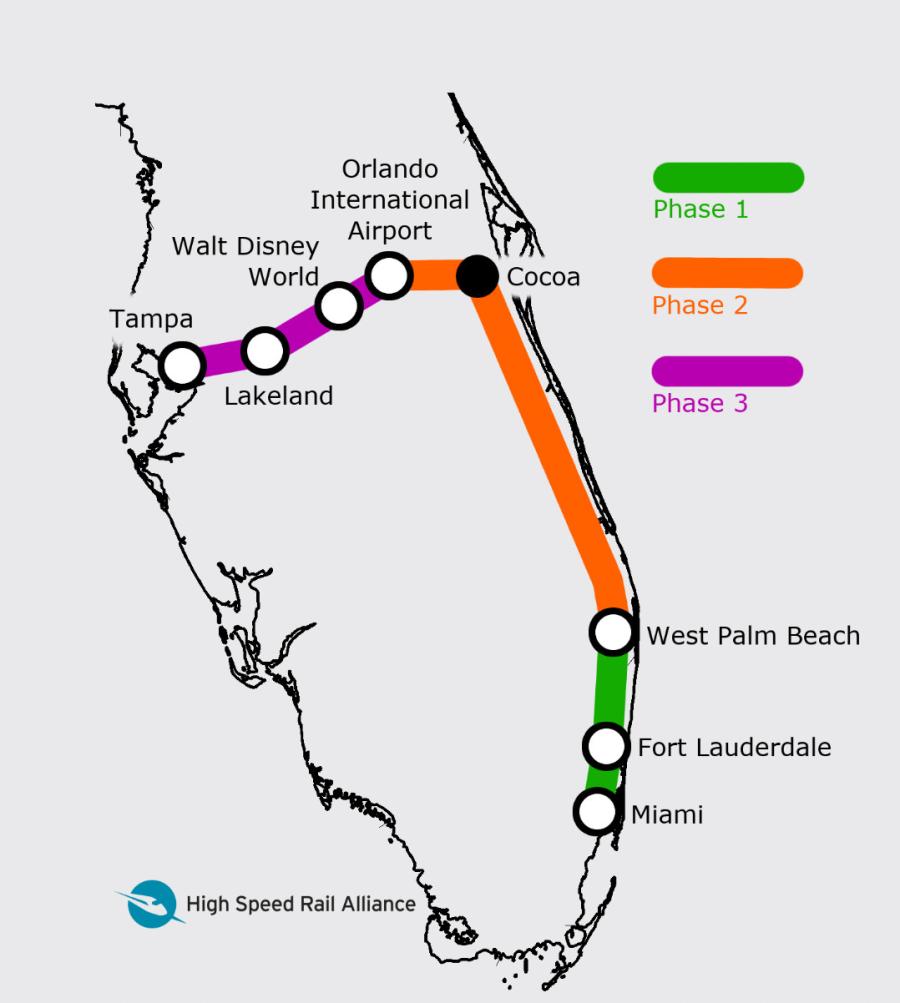 This Brightline map illustrates the three expansion phases of the line.

The award of up to $15.8 million came from the U.S. Department of Transportation's (USDOT) Consolidated Rail Infrastructure and Safety Improvements (CRISI) Grant Program. It will go toward Central Florida's Sunshine Corridor and Brightline's proposed Tampa to Orlando passenger rail project.

Brightline, the privately run high-speed rail service, will match the funds from the federal grant to create a total investment in the pre-construction phase of $31.75 million.

The country's only provider of modern, eco-friendly intercity passenger rail travel, the passenger train service is currently running between Miami and West Palm Beach. At the same time, Brightline is building an extension from West Palm Beach to Orlando, which is expected to be finished at the end of this year and carry passengers in 2023.

An extension to Tampa is the next step in connecting 70 percent of the state's population by its rail service, company officials said in the news release.

The project's pre-construction efforts will include 15 percent and 30 percent design completion for the Orlando to Tampa route, which includes working within existing travel corridors and the Interstate 4 median, Brightline noted.

Webster was quoted in the Brightline news release as saying, "Transportation — moving people and goods — is a vital element of Florida's economy. As a senior member of the Transportation & Infrastructure Committee, engineer, and longtime advocate for infrastructure, ensuring our state has the resources needed is one of my priorities."

Demings, his colleague in the U.S. House, added, "I'm proud to [be a part of announcing] this new federal funding that will expand Florida's infrastructure and help grow our economy while ensuring the system functions safely and effectively. Our community is the heartland of tourism in America, and Brightline's plan to connect Miami and Tampa to Orlando's tourism centers will help supercharge our continued growth and attract visitors from across the country and around the world."

The idea for the Sunshine Corridor, Brightline Chief Executive Officer Michael Reininger explained, was that it was to be a comprehensive and ambitious solution for the popular Central Florida region.

"It represents the missing link in Brightline's plan to connect Orlando and Tampa with modern, eco-friendly, intercity passenger rail," he said. "New, innovative transportation solutions will provide an economic boost to Central Florida and make the state even more attractive to businesses and future residents."

Brightline noted that Central Florida is projected to experience significant growth in population, employment and tourism over the next 10 years, which will increase congestion on current roads and highways. Most travel between Tampa and Orlando is done via I-4, which recent studies identified as the deadliest road in America, according to Brightline.

The train service has placed a big bet on intercity passenger rail being an increasingly vital tool to help the state manage future growth under constrained conditions that limit the ability to expand highways.