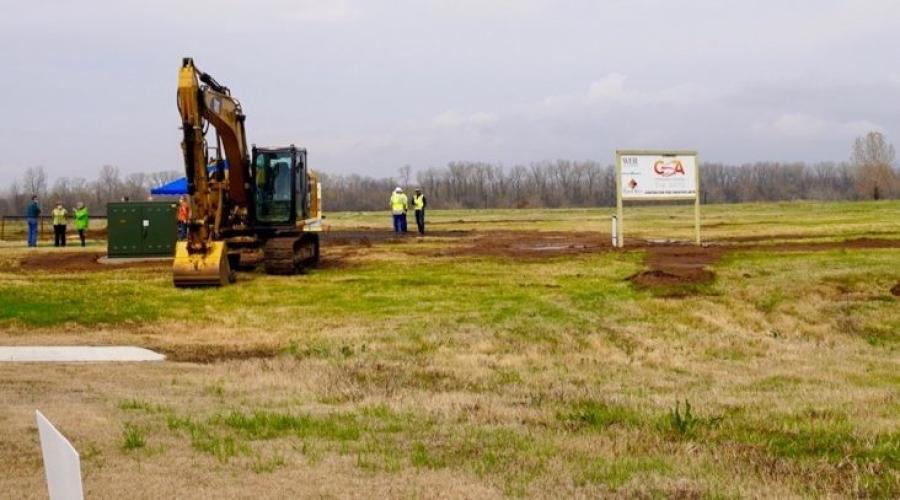 The groundbreaking is the start of a 16- to 18-month timeline for the center's construction. It is 60 percent funded through large grants and private donations.

A centralized location for students in the Fort Smith, Ark., region to learn the arts — a brand new concept in Arkansas — is one step closer to fruition.

Community School of the Arts administration and public officials broke ground on the school's $7.5 million Center for the Creative Arts on March 17, thus beginning its construction just north of the U.S. Marshals Museum on the Fort Smith riverfront.

Once completed, the center will hold 500 students at a time from western Arkansas and eastern Oklahoma to learn music, theater, dance, visual arts, film and culinary arts.

The groundbreaking is the start of a 16- to 18-month timeline for the center's construction. It is 60 percent funded through large grants and private donations. Hopes are high among center officials that they can receive the remaining monies by the end of 2021.

"I see it going [on] to being a model for all of the state and all of the nation," said School of the Arts board chairperson Rick Foti.

The school began in 2016 under Rosilee Russell, the former University of Arkansas-Fort Smith Academy of the Arts director. It currently facilitates programs for students from 39 school districts in a 60-mi. radius. Classrooms are at St. Boniface Catholic School, Central Presbyterian Church and through programs at public schools in the catchment area.

At its height, the school has facilitated programs for approximately 800 students and still taught 300 to 500 students during the COVID-19 pandemic.

"The students come, part of the day, to that center for credit," Russell said of the project, adding that there are programs like it in states such as Virginia.

The vision for the center began in 2017 when the Robbie Westphal family gifted the 11-acre tract to the school for future construction of the facility. When completed, the arts center will encompass 60,000 sq. ft. on 10 acres with the other acre dedicated to set and costume design on the other side of Riverfront Drive.

The entire project is expected to cost at least $15 million.

The Center for the Creative Arts' completion will be overseen by Little Rock's WER Architects/Planners, Morrison-Shipley Engineers in Bentonville and Turn Key Construction Management Inc., the Fort Smith general contractor.

Once finished, it will hold a 350-seat theater, recording studio and kitchen for the artistic disciplines it facilitates. It also will be home to multipurpose educational space for all six disciplines to be taught at the school.

While the center will teach traditional arts, Foti said faculty will stress digital arts as well.

"We can certainly give you violin lessons, but if you're interested in doing something that's 21st-century minded, you can do that, too," he said.

Russell sees the center not only educating students but also contributing to the vision of Fort Smith. She hopes the school and the U.S. Marshals Museum are a catalyst for riverfront development. Fort Smith Mayor George McGill anticipates that the school will be a draw for large companies that want to move to the city.

But McGill said the educational side of the center is beneficial to the city's vision, too. As an example, he explained that Singaporean dignitaries who toured the city as a possible home for their F-16 fleet earlier in March took note of the school.

Regardless of its broader impact on the region, Russell sees the school "as a model for arts and education."

"Thank you for the vision, and thank all of you for the support," McGill said at the groundbreaking. "This is going to be amazing."