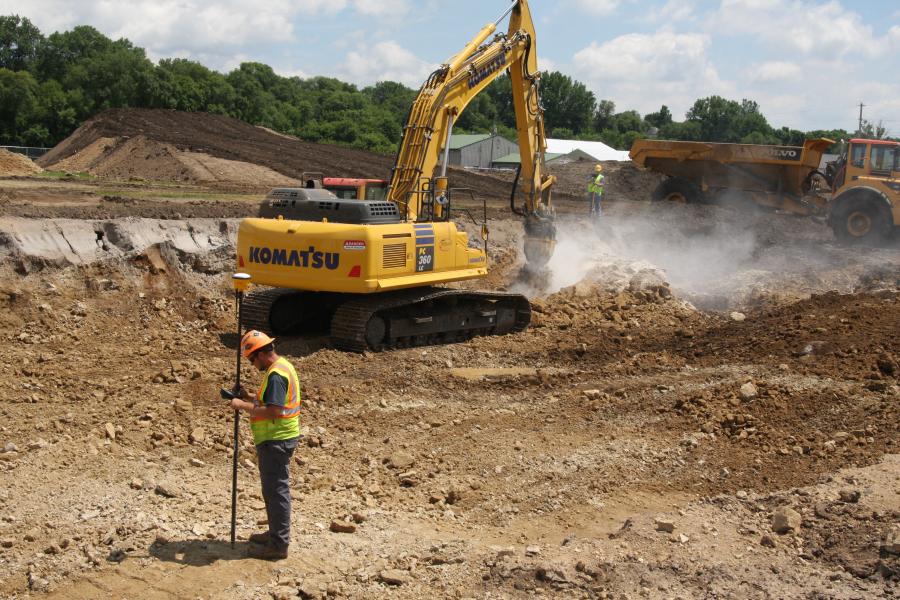 As a Frattalone GPS specialist verifies depths, the Genesis Model 40 Cyclone continues to grind away. The tool proved a perfect fit for creating an underground stormwater retention pond in rock that varied from 4 to 6 ft. in depth.

As the name implies, specialty tools are just that: tools that fill a specific need, perform a unique function or solve a particular problem. They are not all things to all people. But, as Frattalone Companies recently found out, when needed, they can be the most valuable tool on the job site.

As part of a recent demolition and renovation project, the Minnesota-based general contractor tackled an underground stormwater retention pond job south of St. Paul, where it was faced with a layer of limestone and other harder rock beneath the surface. 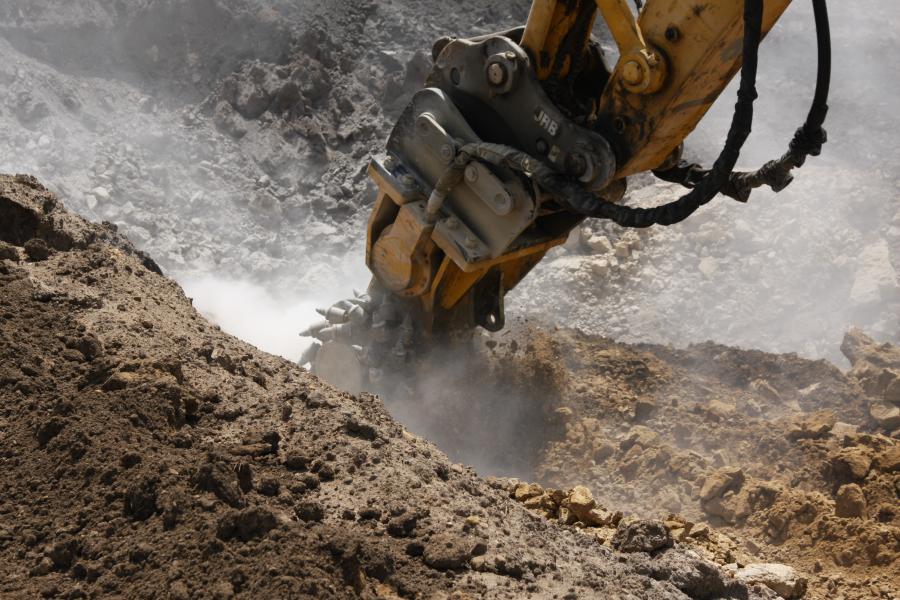 Unable to rely on more traditional methods to remove the rock, the company turned to a Genesis Cyclone Grinder (Genesis Attachments, Superior, Wis.), which, incidentally, the manufacturer markets as part of its specialty applications tool line. The result has been a fast, efficient reduction of the rock into a manageable, reusable material — all without the noise and vibration normally associated with such work.

One of the Twin Cities' premier civil site construction experts, Frattalone Companies is a family-owned and operated firm based in St. Paul. Established in 1970, the company initially provided excavation and grading services to residential home builders, but it grew over the years and today offers earthwork capabilities, demolition, environmental remediation and underground utilities services, essentially providing a one stop civil site construction solution for its clients.

"As we've grown, so has our reach throughout the region," said Mark Mahowald, one of the company's project managers. "However, while we work throughout the upper Midwest and sometimes beyond, the bulk of our projects are here in the Twin Cities."

The current $1.3 million project involves repurposing part of an existing structure, which formerly housed the Oltman Middle School, to become the new home for Nuevas Fronteras, School District 833's Spanish immersion program. To make that happen, Frattalone is demolishing some of the 1950s-era structure and making the adjacent site ready for bus turnaround and staging, as well as a parking area.

Site work for the school project included the creation of a large 56-x-234-ft. subsurface stormwater detention system to handle runoff from the areas above before it is emptied into nearby waterways. According to Mahowald, what should have been a fairly standard cut-and-fill project was anything but. 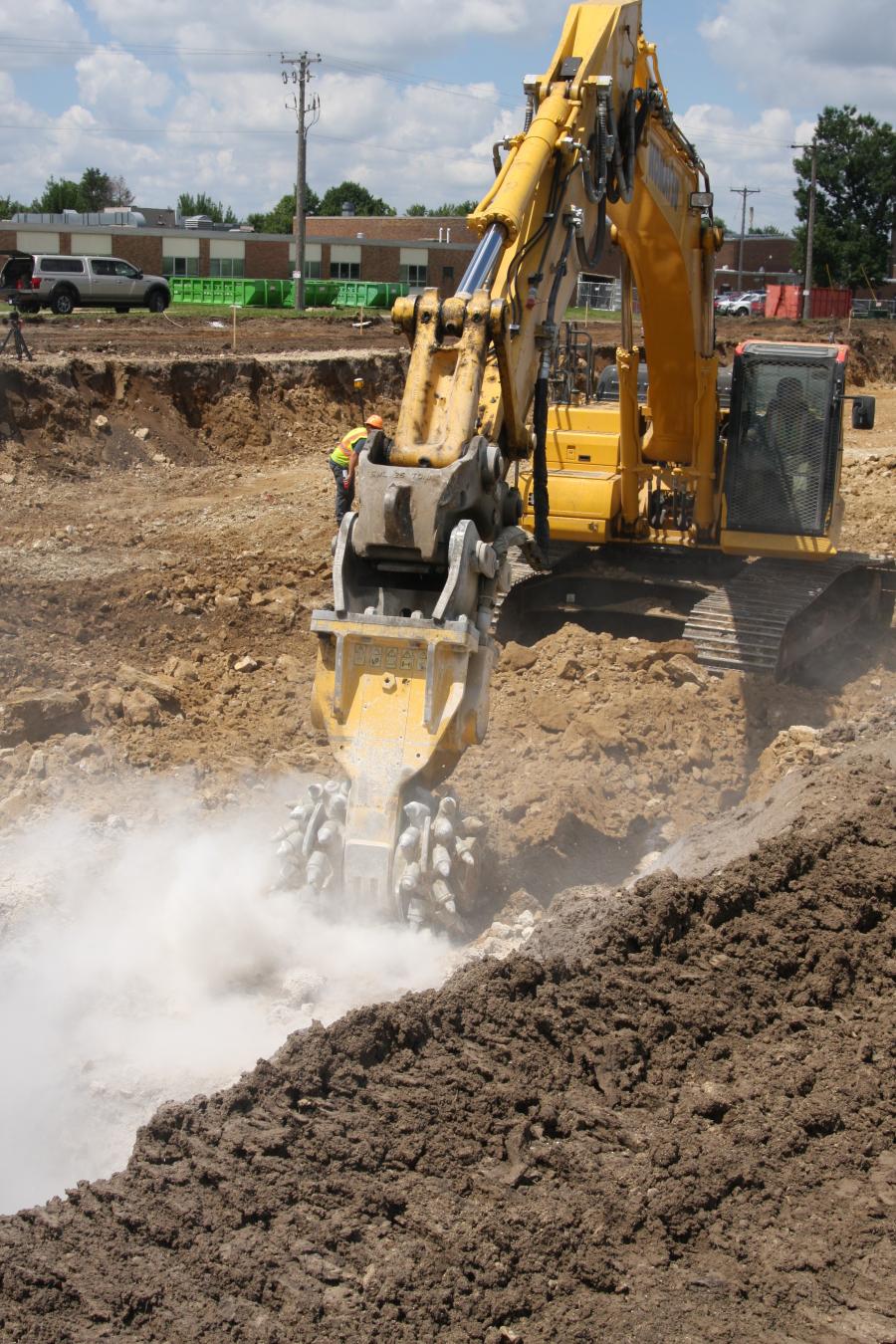 "When we got the geotechnical report back in advance of excavation, it indicated a large, 3- to 7-foot-deep rock layer a couple feet below the surface," he said. "With that knowledge, we started looking at our options for dealing with that rock layer and knew there weren't many. Because rock projects for us are fairly rare, we don't own a rock drill for line drilling and would have needed to sub that out."

In addition to the detention pond system, about 770 linear ft. of 5-ft.-wide trench in the rock needed to be excavated, he added. Because that activity demands fairly clean lines, hammers would simply not be a good fit. Having seen rock-grinding attachments at some demolition shows, Frattalone called Phil Major, territory manager at Road Machinery & Supplies (RMS), to ask if they had anything similar in their rental fleet.

"While they didn't, he was sure that Genesis did," said Mahowald. "So we contacted Justin Palvere, their demolition national account manager, and arranged for delivery of the GCG 40 Cyclone."

Mounted on a Komatsu PC 360LC excavator, Frattalone's GCG 40 rock and concrete grinder features a pair of 27-in.-diameter rotating cutter drums, each equipped with 27 carbide-tipped picks arranged in a pattern that is optimized to ensure smooth and powerful operation while minimizing vibration.

The attachment has proven valuable in the demolition, excavation/trenching, tunneling/mining and concrete grinding industries. It features design advancements over many other comparable grinders, including the use of a two-hose hydraulic system, which eliminates the need for a case drain line and simplifies installation.

"The Cyclone's ability to grind through rock with minimal noise and — more importantly, minimal vibration — was important at the Oltman site," said Mahowald. "We were working about 200 feet from an apartment complex and, because rock tends to transfer vibration so well, if we were hammering, those residents would be complaining. We've had no complaints at all thus far.

Frattalone's team is meeting its production numbers, which, according to Mahowald, were projected to be 16 to 20 yds. an hour in the hard rock.

"With the GCG, you can just grind in and keep moving along," Mahowald said. "It is also better for cutting a straight trench. It gave us straight line control — exactly what we need for this project."

Equally important, the Cyclone is producing a byproduct that is reusable on site and lowering peripheral costs. 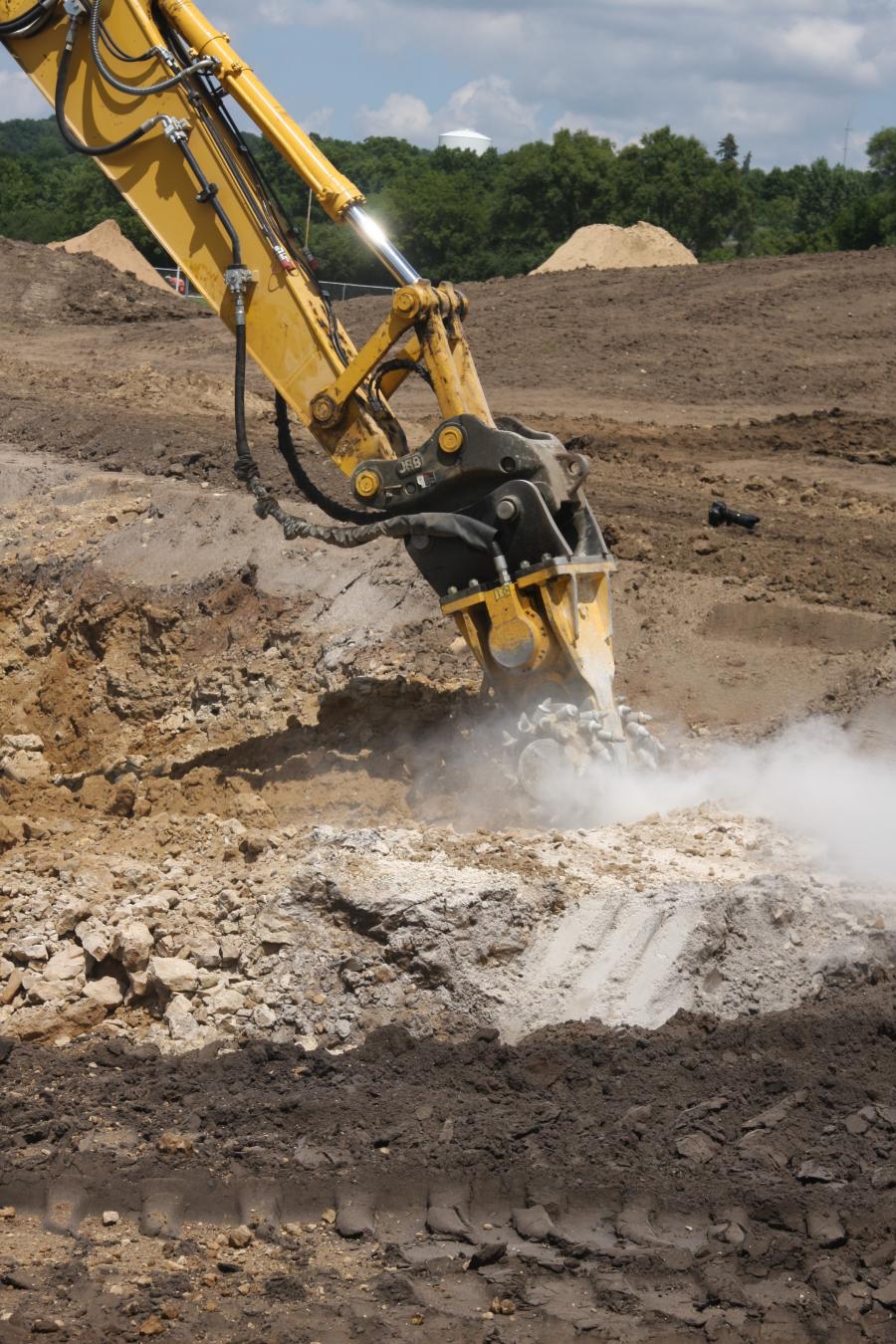 "That's another definite advantage of using the Cyclone," said Mahowald. "If we'd been forced to hammer all this rock, we would have been left with large chunks and small boulders, none of which would have benefited us at all. We would have had to pay to transport the material off site, then pay again to bring in trench rock. Instead, the Cyclone is generating material that is fairly consistently in the 4-inch minus range — perfect for use at the bottom of a trench as well as in other areas on site."

Work at the Oltman school site started after classes ended in June, lasted throughout the summer, halted again and will resume after the 2019 school session. The company's overall involvement includes selective building demolition and storm sewer, detention, re-piping and earth work.

"This detention pond element of the project could have been a real headache for us," said Mahowald. "Instead, despite that imposing layer of rock and some real vibration concerns, we were able to stay on track. That's due largely to the role the Genesis attachment has played in the operation. We could not have been more pleased with what the Cyclone did for us."