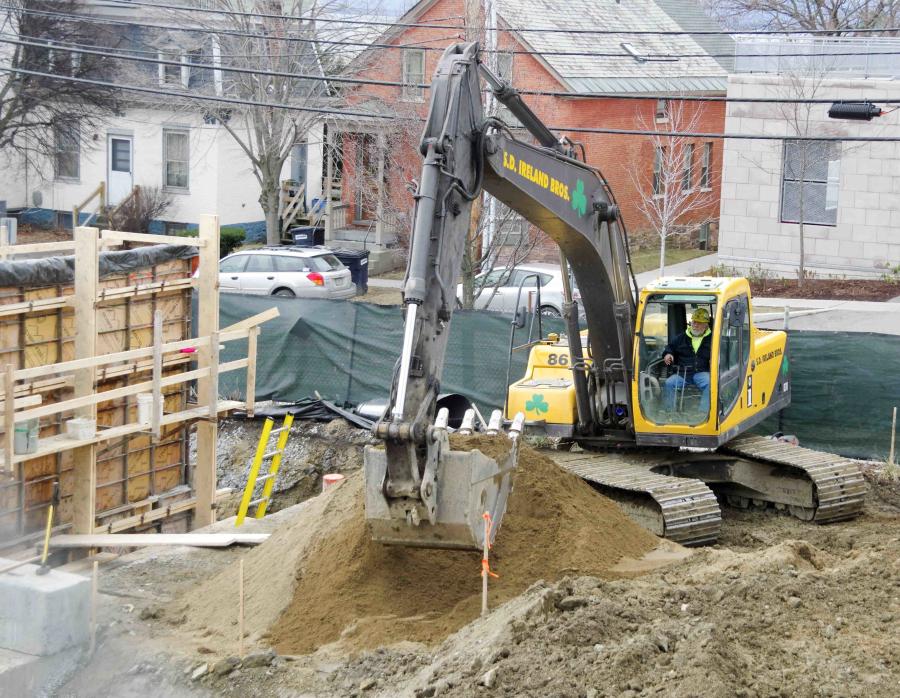 Champlain College and the city of Burlington, Vt., are collaborating to create a student housing project known as Eagles Landing.

The $36 million contract was awarded to HP Cummings Construction, under the direction of Mike Hulbert. Work began on Jan. 1, 2017, and completion is anticipated for August 2018 in order to accommodate student occupancy for the beginning of the fall semester.

Laackman explained that the project will convert a parking lot and former Eagles Club site along St. Paul Street between Maple and King streets into a vibrant, mixed-use block of street-front retail with student apartment housing above. The upper floors will house 105 apartments containing 314 beds dedicated to Champlain College students. In addition, there will be approximately 5,000 sq. ft. of ground-floor commercial space along St. Paul Street as well as 66 parking spaces available to lease to the public.

“We know Burlington is one of the major factors in why our students choose to attend Champlain, and this location in downtown Burlington provides access to all that the city has to offer, including local employers, culture and entertainment and the great outdoors,” Laackman said. “Eagles Landing has many other benefits for both Champlain College and the city of Burlington. This project supports Champlain's long-term goal, as outlined in our 2007 Master Plan developed with the community, to house all of our students on campus or in College-managed facilities. The Eagles Landing project helps to relieve some pressure on the tight Burlington housing market and will decrease the number of students living in non-College-affiliated apartments in neighborhoods adjacent to the campus.”

Champlain will retain property management responsibility for the facility, enabling the college to maintain standards consistent with other projects on campus.

“For too long, the way in which we have housed our students in this community has put undue pressure on the housing market and contributed to quality of life concerns in the historic neighborhoods near Champlain College and the University of Vermont,” Weinberger said. “This project breaking ground represents progress on addressing these longstanding issues and the start of a new strategy that could lead to further gains. I welcome Champlain College's partnership in this effort in addition to our many other collaborations.”

Laackman also offered Champlain's thanks to the city of Burlington and, in particular, the administration of Mayor Weinberger, for recognizing the important role of higher education in the community.

“We value our partnership with the city, and thanks to this collaboration, we are able to celebrate this milestone today,” he said.

The process reportedly began almost 10 years ago, when Champlain College acquired the Eagles Club in 2008, and culminated in early December of 2016 when the purchase of the Browns Court parking lot from the city of Burlington was finalized.

Since the project was first proposed, input from the city and the community has led to design improvements, a size reduction of the building, and exterior material changes compatible with the character of the neighborhood.

“A project like this only happens with the dedication and persistence of many team members, including the Champlain College Board of Trustees, Champlain's Finance and Campus Planning teams, H.P. Cummings Construction, and Gardner Kilcoyne Architects of Williston,” Laackman said. “And we offer a special thank you to the surrounding neighbors for their input in the planning process and their patience during the construction.”

According to Stephen Mease, director of public information and news for Champlain College, challenges with the project include poor structural soils, dealing with winter conditions, and an urban setting that restricts the lay-down area.

He noted that the project is unique in that it is being built in a prominent downtown location and that it is the first dedicated student apartment project in downtown Burlington.

Founded in 1878, Champlain College is a small, not-for-profit, private college in Burlington, Vt., with additional campuses in Montreal, Quebec, and Dublin, Ireland. Champlain offers a traditional undergraduate experience from its campus overlooking Lake Champlain. It offers more than 60 online undergraduate and graduate degree programs and certificates.

Champlain College is included in the Princeton Review's The Best 381 Colleges: 2017 Edition. Champlain College is featured in the “Fiske Guide to Colleges” for 2017 as one of the “best and most interesting schools” in the United States, Canada, and Great Britain. Champlain was named one of the “Most Innovative Schools” in the North by the U.S. News and World Report's 2017 “America's Best Colleges” and #91 in the overall list of “Best Regional Universities” in the North.