Charleston, S.C., to Soon Have Deepest Harbor on East Coast 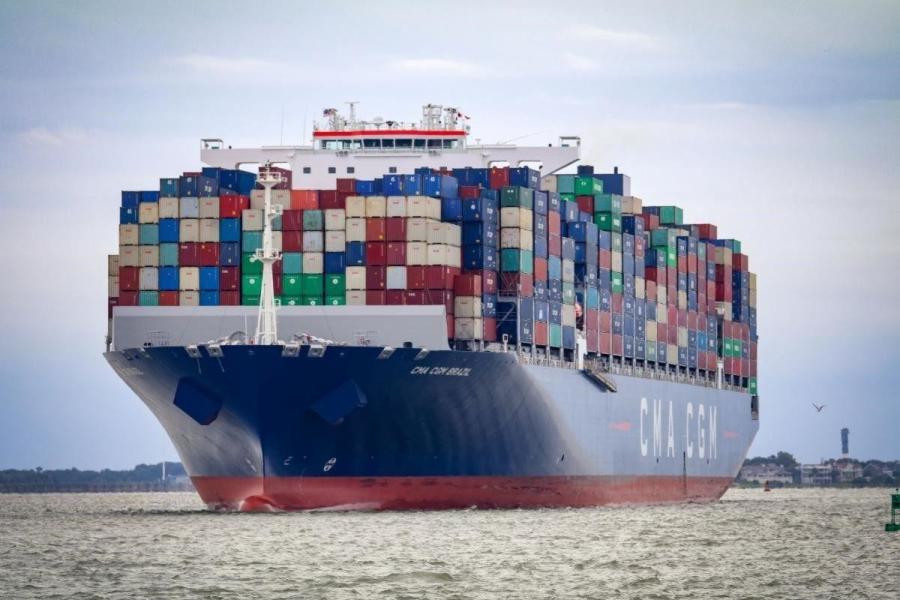 The CMA CGM Brazil, a 15,000 TEU container vessel spanning 1,200 ft. in length, sailed into Charleston's harbor Sept. 20. The ship — the largest to ever visit the East Coast, and Charleston harbor — was able to enter Charleston's harbor due to its maintained and deepened channels.

In September, the U.S. Army Corps of Engineers (USACE), Charleston District, awarded the final two dredging contracts on its harbor deepening project, which will make Charleston, S.C.,'s harbor the deepest on the East Coast.

The contract awards also coincided with the arrival Sept. 20 of the CMA CGM Brazil, a 15,072-TEU containership stretching 1,200 ft. long, and the largest containership to ever call on the East Coast and Charleston harbor.

Charleston was the last stop on its East Coast itinerary, because the harbor's depth permitted full loads before the ship made the return trip back to its home port in Shenzhen, China.

Located midway along the state's Atlantic coastline, the Charleston Harbor also supports a vital defense mission and is one of the nation's 17 strategic ports for national defense.

Valued at $597 million, the Charleston Harbor Deepening Project, known as Post 45, takes Charleston's federal entrance channel to 54 ft., the lower harbor to 52 ft. and the upper harbor to 48 ft.

Post 45, which began as a feasibility study in 2010, kicked-off the project's construction phase in early 2018. The four-year, five-contract deepening operation is projected to complete all dredging construction in 2022.

"Taking a project of this scale and impact from a feasibility study to completion in 12 years and within just six years of its federal construction authorization is a testament to the vision of the Port, the cooperation of local leaders and the determination and professionalism of the Charleston District and the Army Corps of Engineers," Honderd said.

The short and long-term economic impacts of this project both locally and for the nation are far-reaching.

"The project has a benefit-to-cost ratio of 6.4," explained Honderd. "In other words, the project gives $6.40 to the state and national economies for every $1 invested."

Officially awarded Sept. 9, Contract 4 deepens the portion of lower harbor connecting the Cooper River from the confluence with the Wando River to the SCPA's new Hugh K. Leatherman, Sr. Terminal on the Cooper River to 52 ft. Contract 4 was awarded for approximately $53 million to Great Lakes Dredge & Dock Construction of Oak Brook, Ill.

Later in the month, the USACE's Charleston District awarded the fifth and final deepening contract, for an estimated $32 million, to Marinex Construction Inc. of Charleston. Contract 5 deepens the stretch of upper harbor to 48 ft. from the new terminal to the North Charleston Terminal.

Beyond the project's projected completion in 2022, the project team will continue to focus on environmental monitoring and mitigation, accounting for and properly mitigating impacts to wetlands, historical resources and hardbottom habitat, said Jeremy Johnson, Post 45's project manager.

The USACE has maintained Charleston's harbor for more than 140 years, dredging it every year since, to ensure the channel is at the required federal project depth.

"As we ring in our district's 150th anniversary in South Carolina next year, we hope to continue the important work of maintaining Charleston's harbor for the next 150 years," Honderd said.