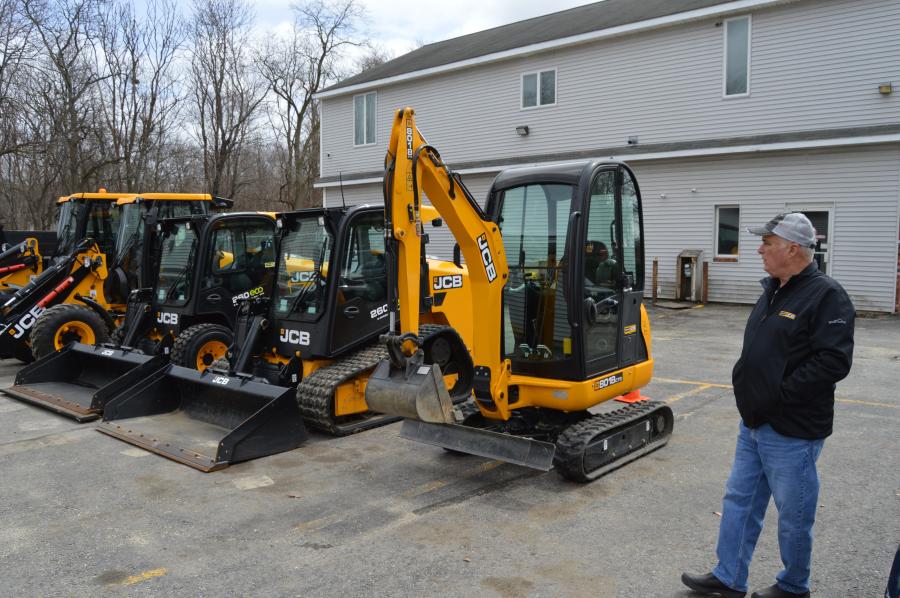 Alan Liguori of Chelmsford Landscaping Company, based in Lowell, Mass., looks over his JCB fleet..

Over the years, Chelmsford Landscaping Company, based in Lowell, Mass., has had a relationship with Northland JCB that owner Alan Liguori has difficulty describing. “Unbelievable” is the word he finally settles on.

“I've been in the industry for just under 50 years,” he said. “We are in our 47th year in business, and I've owned JCB machines before that I purchased from prior JCB dealers. Northland JCB is above and beyond. That's the bottom line. I've called other dealers in the past for some of the other name brand equipment that we have, and the response is awful — “OK, we'll be out in a week,” or “OK, we'll be out tomorrow” — and then they don't show up. I've called Northland JCB at least a half-dozen times in the past year and every time somebody has gotten back to me with when they will be out and it's been within a couple of hours. Even at 5 at night, they get back to me, and then they come out to service within 24 hours every time.”

He particularly remembers a Friday afternoon at 4:30 p.m. when a machine was leaking hydraulic fluid.

“I called them up and said that I need this machine; we are supposed to get 18 inches of snow on Saturday and Sunday and we've got to do something,” he said. “An hour later, I got a call and an hour-and-a-half later there was a machine for me to borrow for the weekend, delivered to my shop, and they took away the machine that was broken. They left the extra machine with me until they had my machine repaired. And, like I said, this was on a Friday night before a snowstorm.”

Liguori also remembers another snowstorm incident when Northland JCB showed up to fix a machine during the night.

“So basically, Northland JCB has been there 24/7 for me, and in those crucial times like during a snowstorm when you can't have a machine down,” he said. “And, if it was something that they couldn't fix, they had something else for me to take. I tell everybody that I just can't believe it because for 45 years I've been dealing with equipment companies and I've never had the same service that I get from Northland JCB. Actions speak louder than words is all I can say, and their actions are there.” 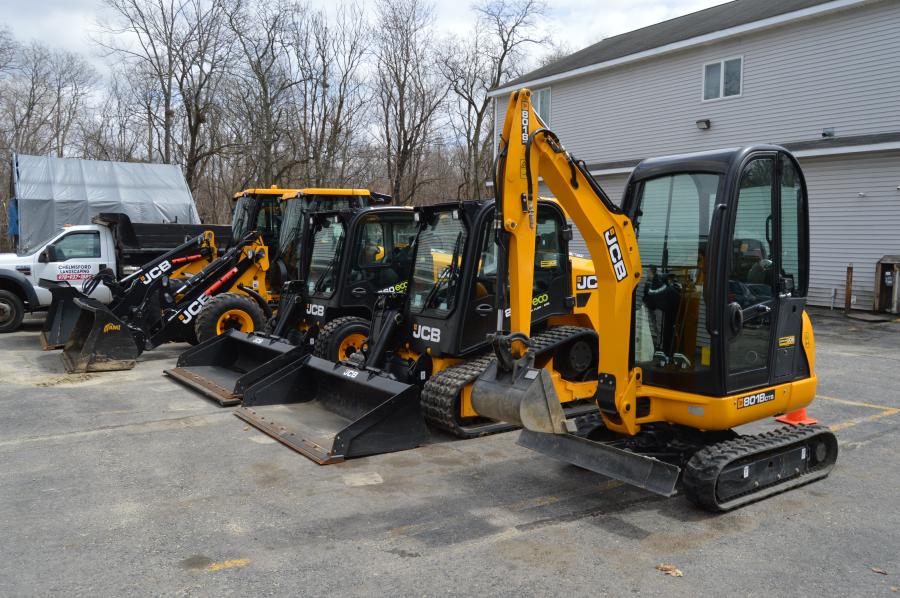 The company currently has six JCB machines in its fleet, a 407 and 409 loader, a 260T and two 260Ws and a mini-1810. Chelmsford's goal is to eventually have eight or nine pieces of JCB equipment in its fleet.

“I remember the first day that I met him,” Liguori said. “He came out here and introduced himself and I said, 'Yeah, I've had some JCBs in the past and I wasn't happy with the dealer.' He said, 'Well, give us a shake, we're new and we're good.' The next time he came out, he brought his grandfather, Steve O'Leary, and he told me that I had to buy a JCB because Pat was just getting going in the business and he needed some sales. His grandfather and I hit it off being of the older generation.”

Liguori said he was willing to give the kid a shot, but he wanted a guarantee. And he got it. O'Leary told him that if he wasn't happy with the equipment, he would take it back.

“And those were his words sitting right out in my parking lot,” Liguori said. “The equipment I'm thrilled with, but the service is what puts it above and beyond. Pat's there for me. If I can't get a hold of the service tech — and it's very rare, it's usually after hours — I call Pat. Even if it is 7 at night, I call Pat and say I need help and he is right there for me.”

Liguori has found the same kind of response in the parts department, and the needed parts have always been obtained.

“I believe there was one part that they didn't have in stock, and they took it off another machine so that we could continue going,” he said. “Every other time, we've always gotten our parts right away with no delay. If they don't have something in stock, we have it within a day or two, but if it is something crucial that puts a machine down, they will do whatever they have to, like if they have to borrow from another machine. That's the kind of service we get from the parts department.”

In regard to the JCB loaders Chelmsford owns — the 407 and the 409 — Liguori is very happy with the turning radius, the loading capacities, and the overall comfort of the machines. 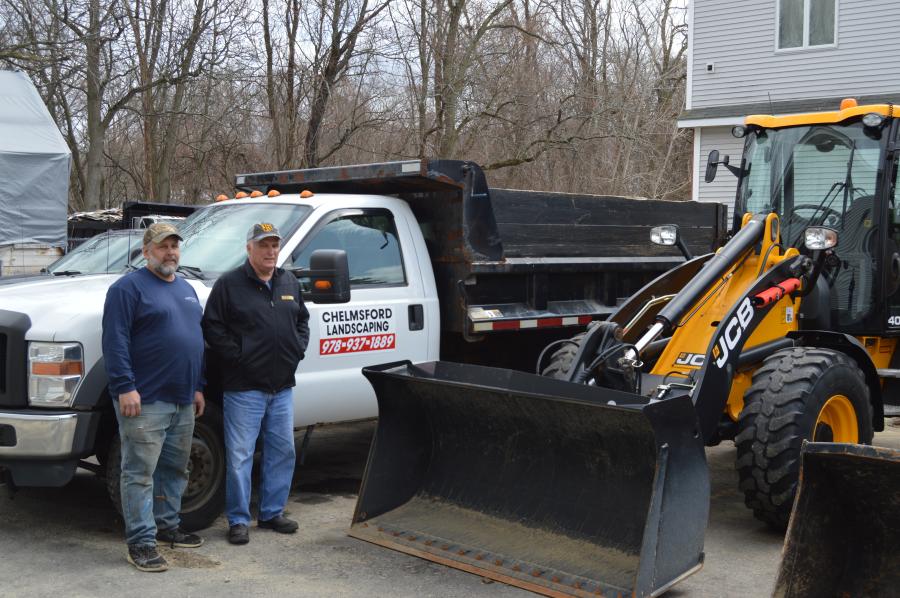 “At the time, it was the largest tracked machine that they manufactured,” he said. “The reason that I bought it was because it had the one arm, and I got inside it and tested it. I really loved getting in from the side. All my other brand skid steers that I had in the past are front-entry, which I hate because if the machine conks out and the bucket is in front of you, you're stuck in that machine until somebody comes with another machine and gets you out. And believe me, it's happened. Anybody who has heavy equipment, I'm sure if they've been in the industry for a while, it's happened to them. They'll conk out. They'll run out of fuel because your guys don't fill them, or different things, or you don't check it. But once you get stuck in a machine and you're in there for an hour or two until somebody else gets ahold of you or comes to the job site, you'll understand how great a side entry machine is.”

Liguori also finds the visibility to be “fabulous,” with extra sight area all around to the left-hand side. As far as capacity, he noted that it can pick up as much as a two-arm machine.

“Honestly speaking, I don't know why all of the other machine manufacturers don't go to a one-arm,” he said. “That one-arm is great for loading, gives you more visibility, and you don't have to ever worry about getting stuck in the machine. Also, I'm getting up in years and I've had a hip replacement, and it's more difficult getting in a front-entry machine than a side-entry machine. The side-entry machine is so much easier to get in. It's more stable.”

Liguori noted that they also have a relatively large excavator of another manufacturer that they've had for about four or five years. It's not time to trade it yet, but when the time comes, he plans to move to JCB. In the meantime, Liguori thought they needed a smaller one, and he purchased a JCB 8018 at an auction. The machine is around 4,000 lbs, with a reach of about 8-1/2 to 9-ft. high.

“Whenever I get something new that I haven't experienced before, I run it myself for a day or two and get used to it and see what the good things and kinks are about it,” Liguori said. “This machine was relatively new; it only had 1,800 hours on it. The first day I got in it — an open cab — and ran it. It ran fabulous. To make a long story short, we had that machine for about three years, then when Pat came in that day with his grandfather, we talked about trading it in for one with a closed in cab, because in the wintertime it gets a little cool. So, we ended up trading that one in and buying another one, which is the exact same model, an 8018 with a closed cab. It's fabulous how it can get into the tight spaces, and the power for such a small machine is unbelievable.”

Liguori also let a friend who had a small landscape company borrow the 8018. He had been using another brand, and when he brought the JCB back, he mentioned the power it had.

“I keep continually hearing the same thing,” Liguori said. “I have several other guys who are in the landscaping industry who worked for me when they were in high school and college and then went into their own businesses after that, and we have good working relationships. If I need some extra help, I grab them; they borrow equipment from me or rent it from me depending on what the job is. Every one of them who has taken that 8018 has come back saying how powerful it is.”

One was surprised at how quickly it took out a 7-in. stump, and Liguori told him about taking 12-in. stumps.

“You just have to take your time and work the machine,” he said. “It will do it. It will pick it up.”

Liguori stated that the 8018 is the machine that impressed him the most as far capabilities to do with the size. He knew what the loaders could do, and the 2004 skid steer had proved itself to him for 15 years.

“But the 8018 was the one at this present time that shocked me with the capabilities that it had,” he said.

In each of the machines, Liguori likes the spaciousness and the visibility.

“Overall, they are designed for comfort and performance,” he said. “I think the machines are very comfortable, and performance-wise they are as good, if not better than, any of the big-name brands — the competitors,”

Besides the satisfaction with the machines, Liguori stated that Chelmsford Landscaping Company is thrilled to have such a nice dealer.

“There are no complaints,” he said. “The whole company has been right there for me 100 percent. They've really made a difference in helping us with equipment. The bottom line is I wouldn't hesitate. Any new machines that we buy will definitely be JCB, because everything — performance, service, and dependability — the machines are right there, and again, I'm going to go right back to the dealer. They are the best dealer I have ever dealt with in any heavy equipment in 47 years.”