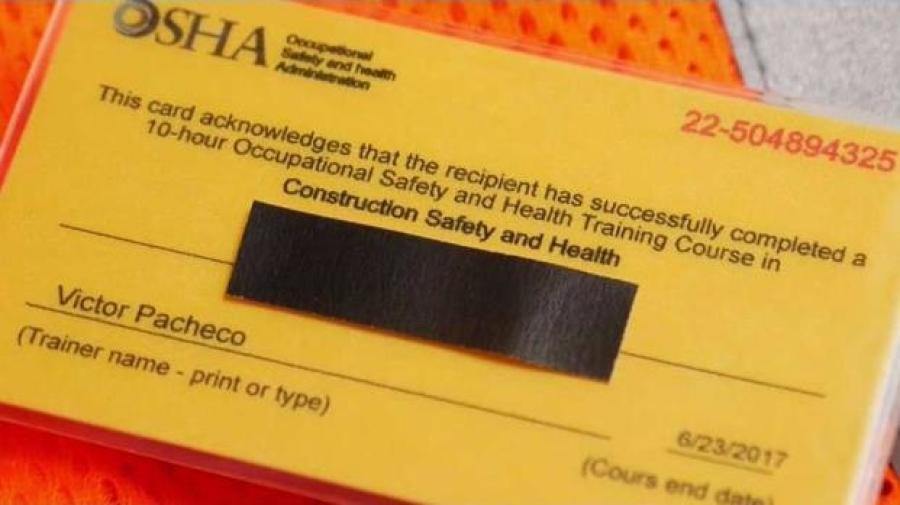 When scouring the black market of fake ID dealers, an undercover team member was able to get a counterfeit card for just $60. What's more, the fake had Certified OSHA Trainer Victor Pacheco's name on it.

An undercover investigation conducted by the NBC 4 New York I-Team and Telemundo 47 has revealed fake safety training cards on the black market.

While workers must, by law, complete 10 hours of OSHA-approved safety training, carrying the card to prove that they have doesn't come cheaply: Training can cost anywhere between $150 and $300, NBC 4 reported. However, when scouring the black market of fake ID dealers, an undercover team member was able to get a counterfeit card for just $60. What's more, the fake had Certified OSHA Trainer Victor Pacheco's name on it.

Pacheco, who has 10 years of experience under his belt, including work as an OSHA enforcement officer, said, “This has been going on for seven or eight years. But it's not only me. My boss, his name is being used on fake cards. People that work for me, their names are on fake cards. It's all around.”

Although the NYC Department of Investigation and Manhattan district attorney's office have tried to stop the sale of these cards by arresting both workers and sellers, they are now trying a new tactic in partnership with the Manhattan Construction Task Force and other agencies. The groups will now trade workers their fake cards for real ones.

“We have essentially said to workers, 'Come in. Hand in your fake OSHA card. No questions asked,'” said Mark Peters, commissioner of the NYC Department of Investigation. “And we'll take the card. We'll give you the 10 hours of training. We'll give it to you for free, and then you can have a legitimate card.”

Training is conducted by various local partners, including the Mexican consulate, NBC 4 reported. The new approach seems to be working — in the past eight months, the program has succeeded in removing and replacing 1,500 fake cards.