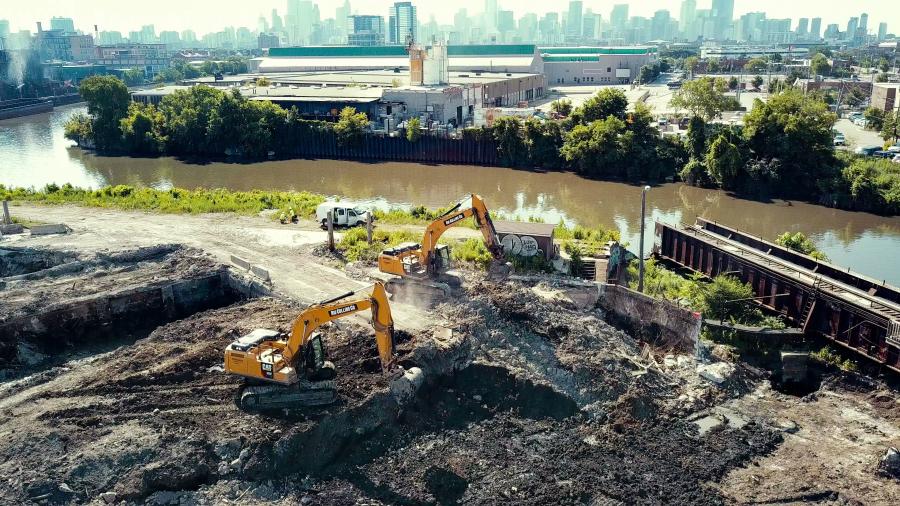 A $6 billion project known as Lincoln Yards will transform a former industrial site in Chicago's North Branch Corridor into a mixed-use community that includes new and improved infrastructure and transportation, businesses and residences, parks and open spaces. Before work can begin, however, crews must complete a major cleanup.

"Our remediation efforts at Lincoln Yards North and Lincoln Yards South are currently under way, and crews are making great progress in preparing the land for continued development," said Sterling Bay spokesperson Julie Goudie. "The remediation efforts at Lincoln Yards are very important, and quite a big effort, as the land has been used for industrial purposes for [more than] 100 years. We're committed to reversing the effects of the site's previous use, and transforming it into healthy, active open space that Chicagoans can enjoy for generations to come. 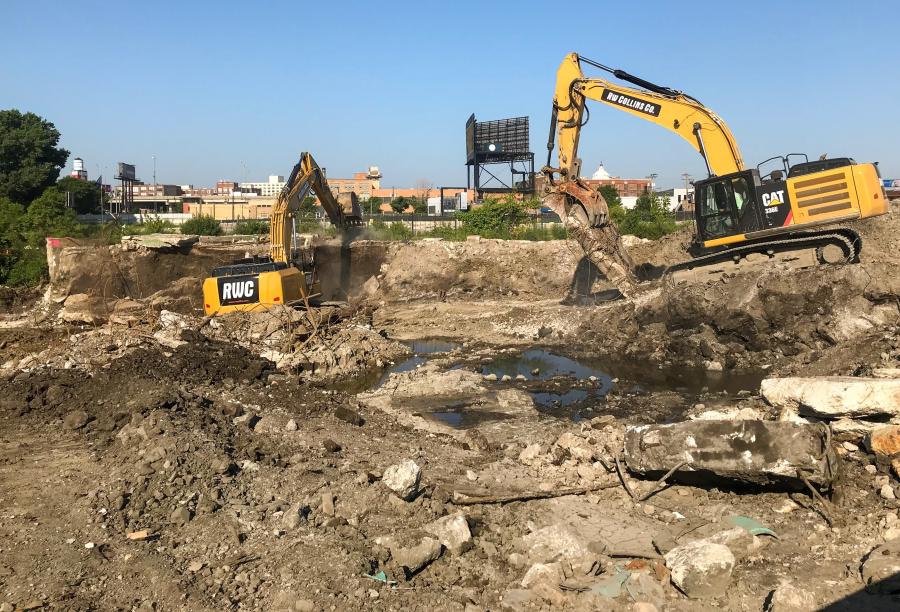 "Lincoln Yards is a once-in-a-generation opportunity to transform 50+ acres of former industrial land located along the Chicago River into a vibrant community that works for our city. The project will create new park space, recreational space, an activated riverfront and multiple new connections between some of the city's most iconic neighborhoods, including Lincoln Park, Bucktown and Wicker Park."

Goudie said Lincoln Yards will have a significant impact on the local community.

"The Lincoln Yards project will bring life-changing benefits to the city of Chicago, by putting tens of thousands of people to work, and generating hundreds of millions of dollars in annual tax revenue."

V3 Companies is the environmental engineer investigating, establishing remediation plans and providing the oversight and verification of cleanup at Lincoln Yards. V3 also is providing the civil engineering and permitting to support demolition and remediation.

"The land has an industrial legacy that spans more than 100 years," said Keith Oswald, P.E., director of environment and geosciences of V3 Companies. "Former industrial operations included [more than] 20 acres that had housed the A. Finkl and Sons steel mill, a Standard Oil petroleum depot, a tire recycling facility, a five-acre scrap metal recycling site, the Gutmann tannery and 25 acres that were once part of Illinois Steel's North Chicago Rolling Mill from the mid-1850s and then later occupied by a Chicago Fleet and Facility Management maintenance operation."

One of the biggest challenges on the job concerns the limited facility drawings dating back to the early 1900s.

"A lot of research and investigations were performed trying to understand not only the nature and limits of contamination, but the altered subsurface environment beneath the site," said Oswald. "Even then, a host of unforeseen obstacles arose at the former Finkl steel mill when unidentified, heavy tooling foundations and other subsurface structures were encountered during remediation. A lot of heavy demolition for unforeseen obstacles and storage tanks with capacities exceeding 100,000 gallons was needed to access and remove impacted soils."

A second challenge is the dense urban environment. 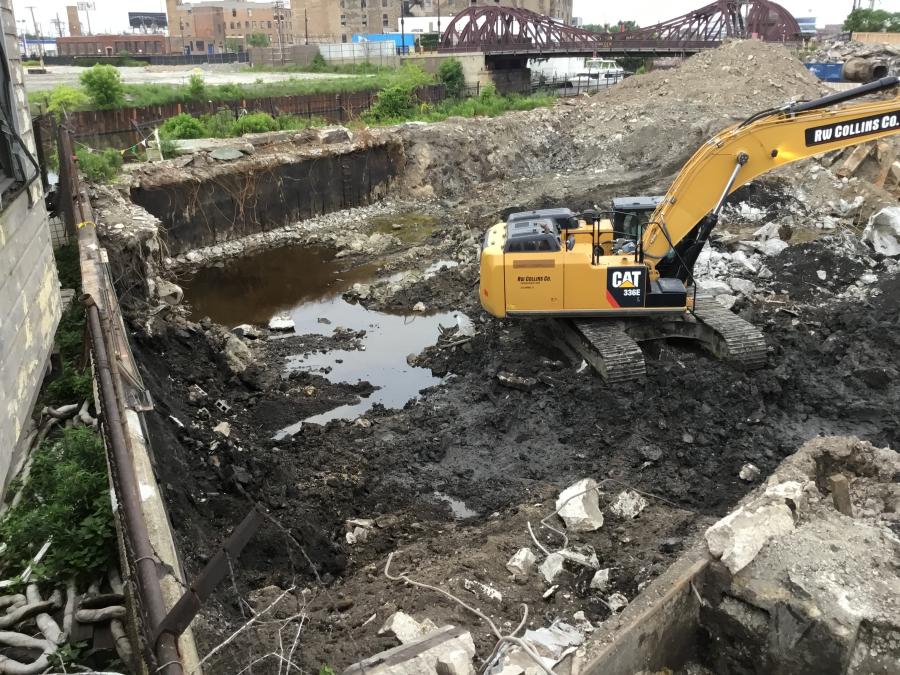 "Adjacent railroads, roadways, utilities, river walls and an historic swing bridge all required protection during the larger cleanup operations. In some cases, earth retention systems were used to allow excavations. In other cases, in situ remediation techniques have been required to avoid compromising the integrity of existing river walls and railroad facilities."

Regarding the most time-consuming part of the work, said Oswald, "Most environmental cleanups include upfront site investigations, design and regulatory approval of cleanup plans and permitting needed to implement remediation. With the complicated industrial legacy of the land, all these factors were in play. Site investigations, regulatory cleanup approvals and permitting took more than a year at Lincoln Yards North, while the bulk of the cleanup actions were performed over the course of about six months. The ongoing cleanup process for Lincoln Yards South is occurring on similar timelines.

"There also were some setbacks that extended the overall duration of remediation. The final remedial action at Lincoln Yards North continued over more than six added months, due to challenges diagnosing the movement and extent of contaminants, and overcoming logistical constraints of removing heavy oils that had migrated along large foundations and structures that remain at the site."

The development plan calls for new public infrastructure including new roadway alignments, relocated utilities and new bridges that cross the Chicago River. Because of the size and complexity of the redevelopment, the master plan, development phasing and different ownership structures divide the overall development into north and south sections.

"Up-front soil investigations were performed by V3 Companies to delineate soils that would require removal and to determine areas that would require earth retention systems to allow excavation," said Oswald. "In many cases, demolition of underground obstructions, including large reinforced concrete tooling foundations, also was required to access and remove the soils. Access constraints also include the logistics of excavation and soil removal around the historic railroad swing bridge and foundation. 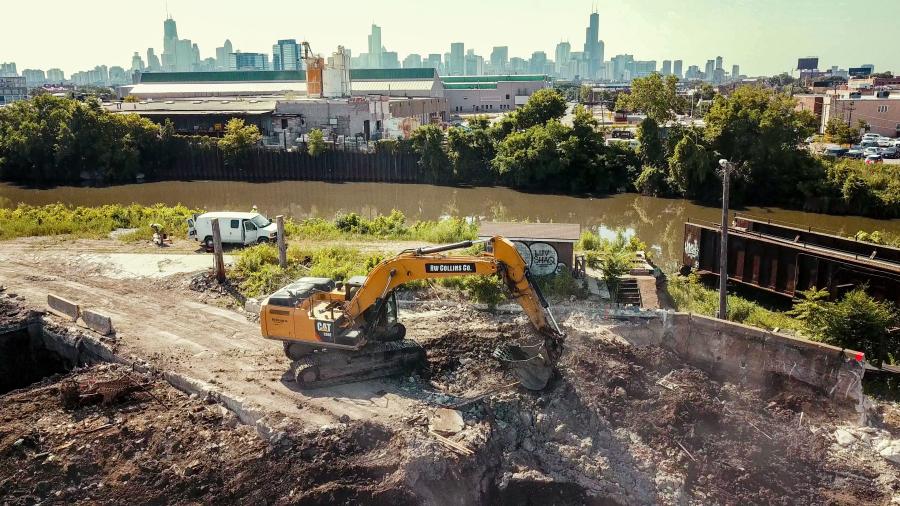 "V3 directed excavation and performed confirmation soil sampling and analysis to verify when the required limits of excavation were achieved. RW Collins provided coordination and execution of an excavating and hauling plan to optimize production rates. All work was done in accordance with a site-specific health and safety plan to ensure worker safety."

The contaminated soils and waters hauled from the property were classified as non-hazardous for disposal, but to achieve proper cleanup, they could not stay on site. With the landfill more than 50 mi. west of Lincoln Yards, RW Collins had to carefully plan each day's tasks to ensure production goals were met and trucks came in and out of the site efficiently and safely.

Oswald said that if left unaddressed, the materials and related contaminant concentrations could represent health risks to future users if there were repeated exposure over time. Some of the materials were saturated with oils and were addressed to prevent the potential for adverse impacts to groundwater and the water quality of the Chicago River.

As part of the work, crews had to treat 200 cu. yds. of hazardous lead soils.

"V3 Companies specified a mix design and loading rates for the addition of Free Flow 200 treatment reagent to affected soils. The addition of the soil reagent is a relatively simple process. Grids were laid out across the treatment areas. RW Collins then added a predetermined weight of reagent and used a backhoe to uniformly mix the reagent into the affected soils. The soils were subsequently sampled by V3 Companies to confirm that they had been rendered non-hazardous."

Removing and disposing of 30 underground storage tanks containing petroleum products also was required. The contractor obtained permits from the Chicago Department of Public Health prior to removing each of the tanks, and had a city inspector on site for each removal. Since many of the tanks were very old, large-capacity concrete tanks, they required careful pumping, power washing and disposal of their concrete casing. 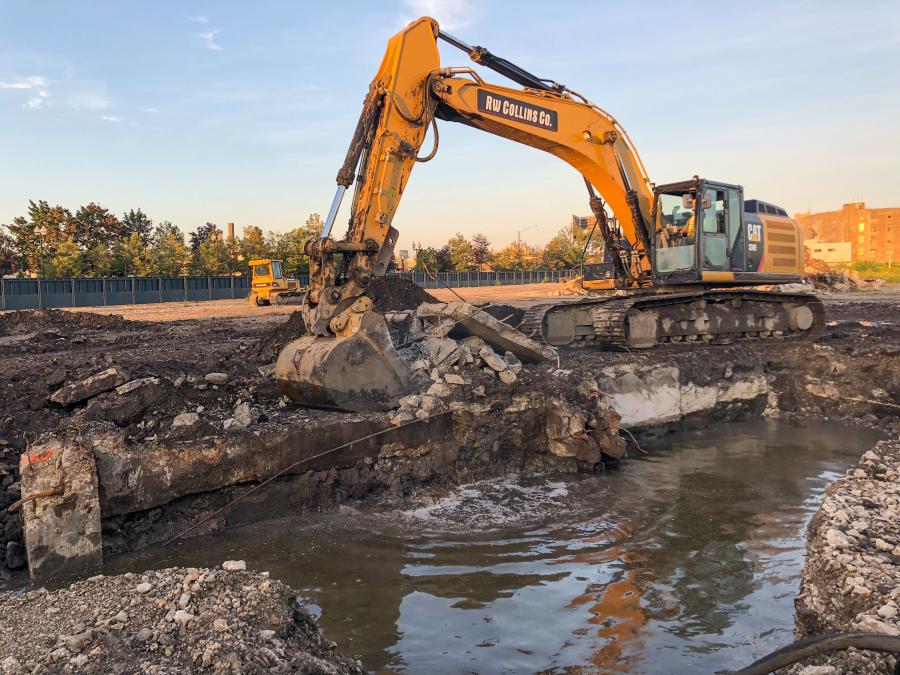 The project called for recycling 200,000 gal. of petroleum-impacted water and 30,000 tons of clean concrete.

"RW Collins utilized vacuum pumper trucks to properly remove, haul and dispose of petroleum impacted water as a non-hazardous waste at a licensed facility," said Oswald. "Concrete was carefully segregated on site, and much of the clean concrete was used as backfill material."

Work on the north section required the use of several large excavators, an end-loader and bulldozer. This included two Caterpillar 336 hydraulic excavators, Cat 966 and Cat D-6 dozers, among other smaller pieces of machinery. Similar equipment will be used during the ongoing Lincoln Yards South cleanup. However, one of the larger cleanup actions in the south section will be performed by in-place thermal remediation, a less intrusive process requiring limited heavy equipment.

Oswald said the industrial heritage of Lincoln Yards South included steel making and, most recently, a Chicago Fleet and Facility Management maintenance operation. All identified underground storage tanks were removed in late 2018 and early 2019. The cleanup that remains includes small hotspots of hazardous lead requiring treatment, discrete areas of petroleum and volatile organic compounds impact to be excavated and disposed. An area of solvent contamination will be remediated using in situ thermal treatment to avoid compromising the river wall.

The in situ thermal remediation of the solvent impacts will be performed using a method referred to as electrical resistance heating (ERH).

"This technology relies on the placement of electrodes in the affected area and creating a flow of alternating current to heat up the soil and groundwater to the boiling point of water, essentially cooking the volatile contaminants out of the subsurface. As the contaminants are freed from the soil and groundwater, they are captured by a subsurface vapor recovery system in air and vapor. The captured contaminants are sent through a treatment system at the surface."

The thermal electrodes are spaced and organized in a grid pattern that optimizes the electrical current and heating. The density and pattern of the electrode grids depends site-specific considerations, with the spacing and operating time adjusted to the most efficient configuration to achieve the desired cleanup time and lowest remediation cost. 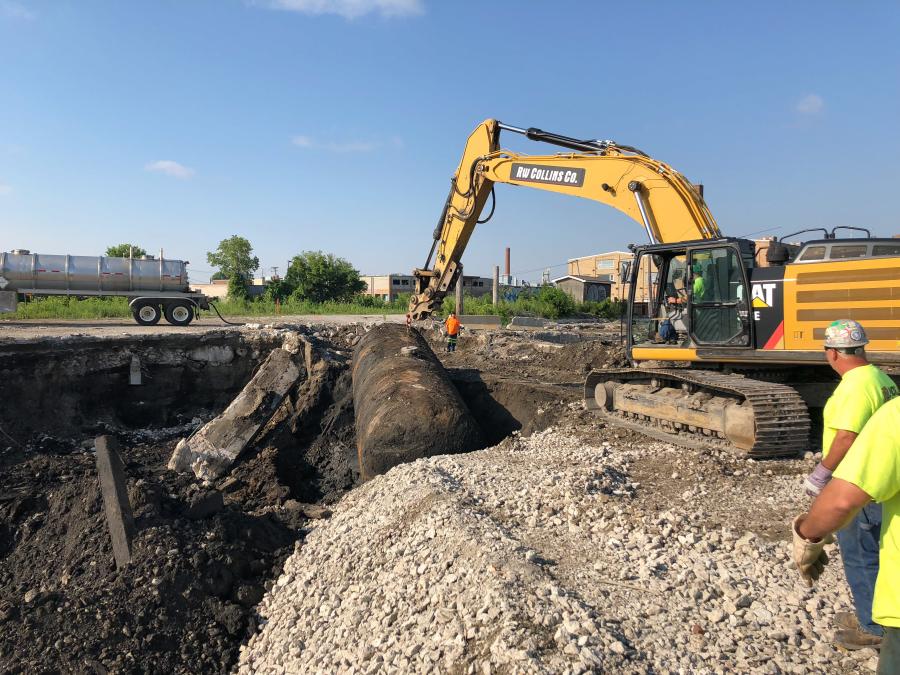 A fair amount of planning and research was required before work could be carried out on the overall project.

"Many historical documents were obtained and reviewed to better understand the former industrial operations," said Oswald. "One of the more difficult site features to work around was a 175-ft. plate girder railroad swing bridge constructed in the late 1800s, known as Z-6, which was used to cross the Chicago River. Cleanup plans required work along the foundation of this bridge, but no documents could be located locally. After some notable online research, the swing bridge foundation drawings were found in an engineering journal article from 1899.

As for dangerous conditions at the job site, Ryan Hartley, V3 remediation manager noted that some chemical hazards are present, but the environmental professionals and remediation workers have the appropriate OSHA safety training and experience to safeguard against exposure risks.

"The potential for exposure to chemical hazards is mitigated with the use of personal protective equipment, and by following the procedures specified in a site-specific health and safety plan established for the cleanup operations."

Oswald said performing the cleanup of Lincoln Yards is critical in preparing for the eventual construction of the urban redevelopment project.

"Many of the V3 Companies professionals working on this project live within minutes of Lincoln Yards, and have been neighbors during the property's industrial days. It's extremely satisfying for all of us to play our part in helping transform it from an underutilized industrial state to a vibrant neighborhood that invites the community to enjoy new public spaces and a long-neglected stretch of the Chicago River." CEG