Clearing the Way for Higher Productivity With Solesbee's Stump Pullers 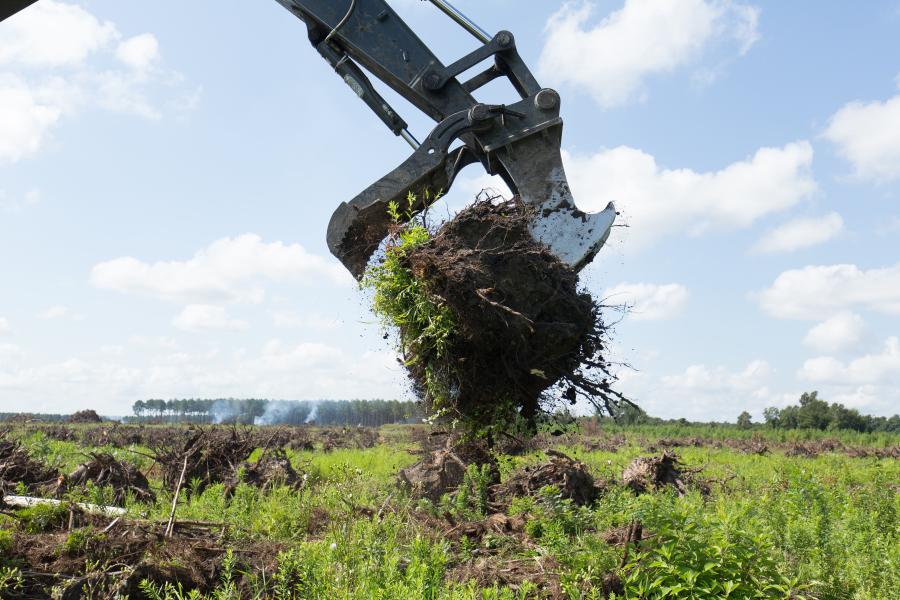 In addition to freeing the stumps from the ground, the attachment drastically reduces the time it takes to level the ground. The small amount of dirt that gets dug up can quickly be pushed back using the stump puller, leaving the ground nearly level.

Developing land, whether for highways or other infrastructure, commercial construction or agricultural use, frequently involves tree removal. While any number of variables factor into the scope of the project — acreage, number of trees, size of stumps — the time it takes to pull tree stumps and level the ground surface can greatly impact the time it takes to prepare the land.

Many contractors and business owners tasked with clearing land don't shy away from tackling tree removal themselves. And with an excavator, backhoe, dozer and other common equipment, it's well within their capabilities. Attachments such as stump grinders can increase efficiency, but are too costly an investment for businesses that do not specialize in tree removal. As a result, excavator buckets are often used and — while less efficient — cost less than subcontracting the work to a company with a stump grinder.

These however, are not the only solutions. Savvy business owners interested in completing tree removal themselves often turn to affordable attachments designed to make quick work of stumps.

Bobby Durham runs a cattle operation in Alabama and found himself looking for an efficient and economical way to pull stumps when clearing his land for pasture expansions and hay field development. In the early days he relied on his excavator with a bucket attachment for the job.

"I run a hay and cattle operation and own an excavator, backhoe, dozer; pretty much everything you need for basic tree removal," said Durham. "Occasionally I have a few trees to remove and other times I'll clear 40 or more acres for additional pasture land."

Like many small business owners with adequate equipment, and for whom tree removal is not a primary focus, Durham made do with what he had. However, this meant he had to remove stump after stump with his excavator bucket.

"I'd use my PC200 Komatsu excavator with a 4-foot-wide bucket to pull stumps," Durham explained. "The bucket makes a mess of the ground and takes time to level out, but I needed a way to break up the roots around the base of large stumps."

By design, buckets are meant to dig, and that's exactly what happens when they are used to break up tree roots. By the time the stump is extracted, there is a large hole where the tree once stood as well as bucket-width holes surrounding it. Before the land is suitable for use, the ground must be leveled.

While Durham had a dozer to level the ground, it was a significant undertaking due to the mess his excavator bucket left behind. Eventually, he sought a more efficient solution for removing stumps. 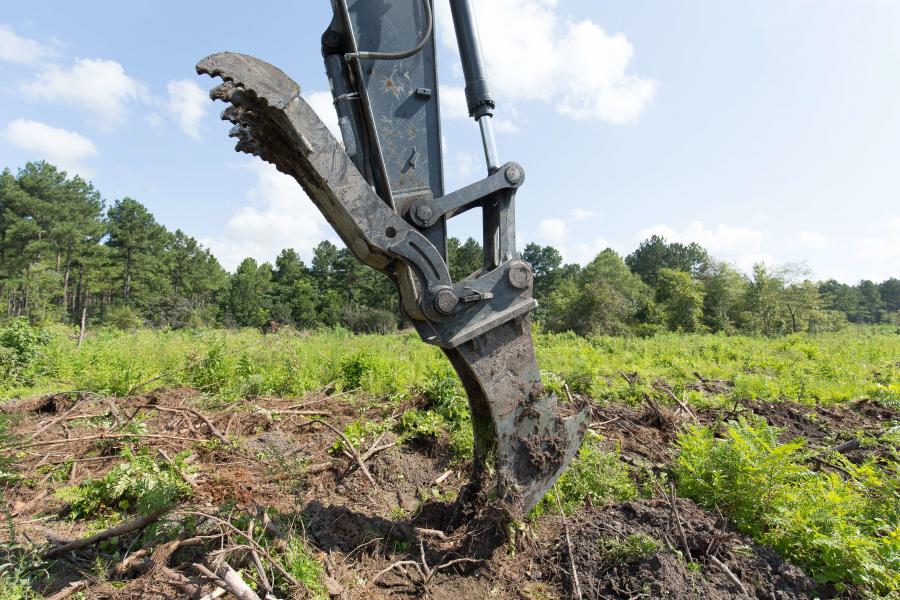 In his search for a root-ripping alternative, Durham came across a Solesbee's stump puller. The inexpensive attachment, comprised of two narrow shanks, is designed to slice through the ground and sever roots while displacing very little soil. Once the roots are cut, the stump can be pulled easily from the ground.

"Switching from the excavator bucket to the stump puller made a huge difference. The two shanks break up the roots and simply pull the stump loose," said Durham. "It also places far less strain and wear on the excavator compared to a wide bucket and it's a lot faster."

In addition to freeing the stumps from the ground, the attachment drastically reduces the time it takes to level the ground. The small amount of dirt that gets dug up can quickly be pushed back using the stump puller, leaving the ground nearly level.

"Between pulling the stumps and leveling the ground, it takes a fraction of the time," Durham said. "Before the stump puller, I'd go back over with my dozer to do some serious leveling. Now I do most of the backfill as I go. I take the stump puller and sweep dirt back and when I come with the dozer, it's just a quick smoothing and leveling operation."

Overall, Durham estimates he's now able to complete the stump removal and leveling portion of his work in about a third the time it took with a bucket. The time savings and price of the attachment alone are enough for some business owners to experience ROI after a single large project. For Durham, this increased efficiency made him popular with friends and neighbors, who occasionally solicit his help when clearing land.

"Between clearing my own land and helping neighbors, I have years of experience, and it's something I enjoy," said Durham. "I'll help folks out with land that's already cut over and only has the stumps left. That's where my equipment really stands apart from what they'd be using otherwise."

With the increasing amount of time Durham spends clearing land, he was thankful to stumble upon yet another time-saving attachment when trading in his excavator for a newer model. When Durham purchased his current Hyundai PC-210 from a local dealer, he was pleased to learn it came with a Solesbee's thumb already installed, effectively allowing his stump puller to double as a stump grabber.

"With the thumb it's easy to grab and stack stumps and other debris into a large burn pile — as high as 30 feet," he said. "Once the stump is out, you just grab it with the puller and thumb."

The attachment's two shanks enhance this capability. While a single shank ripper also is effective for removing stumps, the double shanks on Durham's puller, paired with a thumb, provide three points of contact for more efficient grabbing and lifting.

"The puller also has convenient hooks on the back of each shank that I use to push and position materials so they're easier to grab and grip with the excavator," Durham added.

Due to the frequency with which he used his equipment, Durham began to notice wear on his stump puller.

"Even the highest quality steel wears down after years of digging, hitting rocks and ripping up roots," Durham explained.

To prolong the life of his stump puller, Durham experimented with aftermarket solutions, such as hardened tips and weld-on surfaces. However, none of them worked quite as well as he hoped. Eventually, Durham reached out to the manufacturer.

"I should have contacted them earlier," he said. "Working with Solesbee's was great. They designed a replaceable wear tip that welds onto the shank. Once they become too worn, I can just cut them off and replace them."

Soon after Solesbee's designed the custom wear tip for Durham, the company added it as a standard feature on all of its stump pullers. Durham humbly takes credit for this modification, but speculates it would have happened eventually.

According to Durham, with the replaceable shank tips, his stump puller should last nearly forever, which is far longer than he expected when he set out to find an efficient and economical solution for removing the vast number of tree stumps on his property.

For a business owner who doesn't technically specialize in clearing land, finding an inexpensive way to complete the work in a fraction of the time is, without a doubt, more than he bargained for.