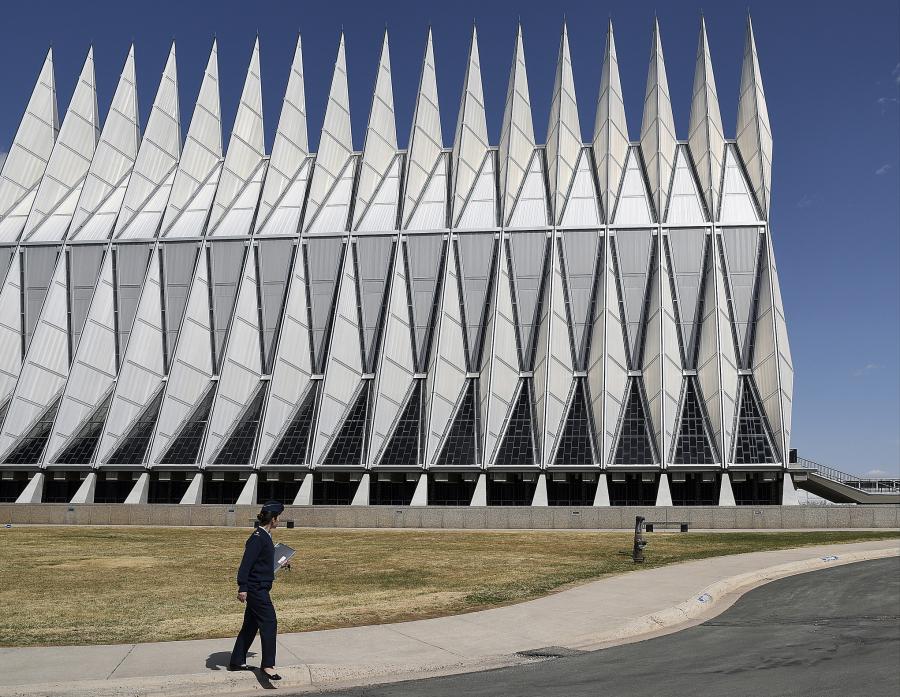 More than $150 million will go into the renovation of the Cadet Chapel at the U.S. Air Force Academy in Colorado Springs.

COLORADO SPRINGS, Colo. (AP) The Air Force Academy chapel is one of the most distinctive pieces of architecture in Colorado.

But few people have caught a glimpse of it for more than a year. That's because the entire building is undergoing an exhaustive restoration inside a 14-story "cocoon."

And it's not likely to emerge any time soon.

The more than $150 million renovation of the Cadet Chapel at the U.S. Air Force Academy in Colorado Springs is going to take months — or perhaps more than a year longer than originally expected — as contractors are contending with more asbestos than they expected, as well as other unforeseen challenges.

"We knew that there was significant asbestos in this building," said Duane Boyle, campus architect of the academy. "We just couldn't get in all the places where asbestos would be to test." 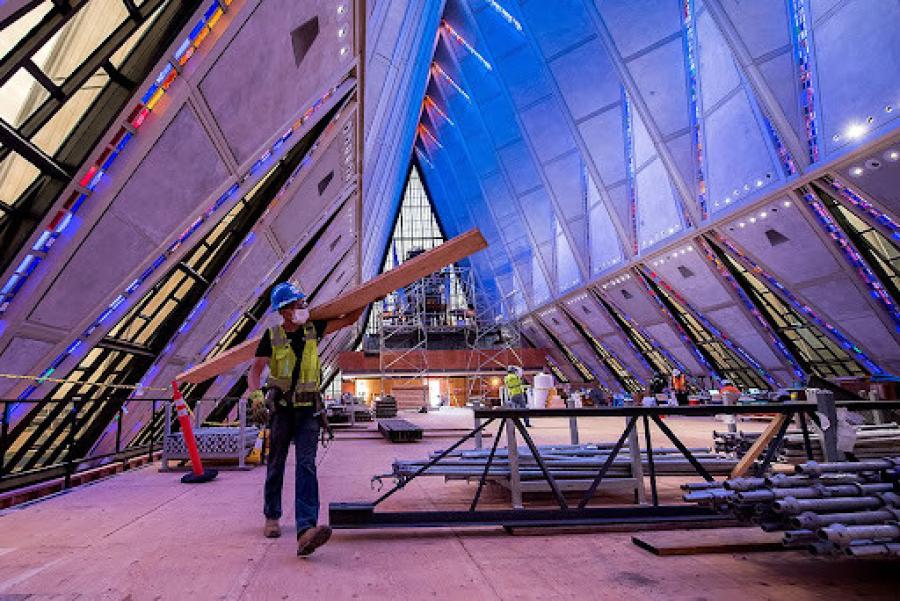 The project began two years ago and has required the construction of a vast white temporary enclosure around the 150-ft.-tall iconic aluminum building. This "cocoon," as Boyle calls it, enables crews to painstakingly correct the legacy of one frugal design choice from the building's initial construction in the 1950s and early 1960s.

The chapel's architect, Walter Netsch Jr., originally conceived of an elaborate gutter system to drain off rainwater falling onto the chapel. But Boyle said that idea was abandoned in favor of caulking all the seals on the building's network of interlocking exterior aluminum panels to cut costs.

"We had 32 miles of caulking on this building, which is kind of ridiculous when you start thinking about that," Boyle said.

The caulking did not stand up to the elements of the Pikes Peak region and the chapel has suffered leaks from the time it opened. Extensive water damage over the past six decades led to the restoration, which involves removing every aluminum panel and more than 20-thousand brick-sized stained glass blocks.

What is under the temporary building now is just a massive steel skeleton covered in rust-colored primer. Inside, the building is nearly unrecognizable. Fourteen levels of scaffolding fill the main Protestant Chapel.

Many of the items that used to be inside, from the pews to the facility's two massive church organs, also are being fully restored either due to water damage or disrepair.

Boyle said dealing with the additional asbestos contamination found in the chapel will push the project past its original 2023 completion date, though he is not prepared to estimate how much longer it might take.

But the plan remains the same: eventually every pew, organ pipe, aluminum panel and stained glass brick will be refinished or meticulously recreated and put back exactly where it was before, with one important addition. Crews are finally installing Netsch's original drainage system to replace the ineffective miles of caulking.

Gazing at all the work around him, Boyle recently offered an assessment of the undertaking he is in charge of.

"I think it would compete as one of the most complicated and intensive historic preservation projects of all time," he said.