In the southwest corner of the state, two large roadway projects incorporated a number of wildlife mitigation features. 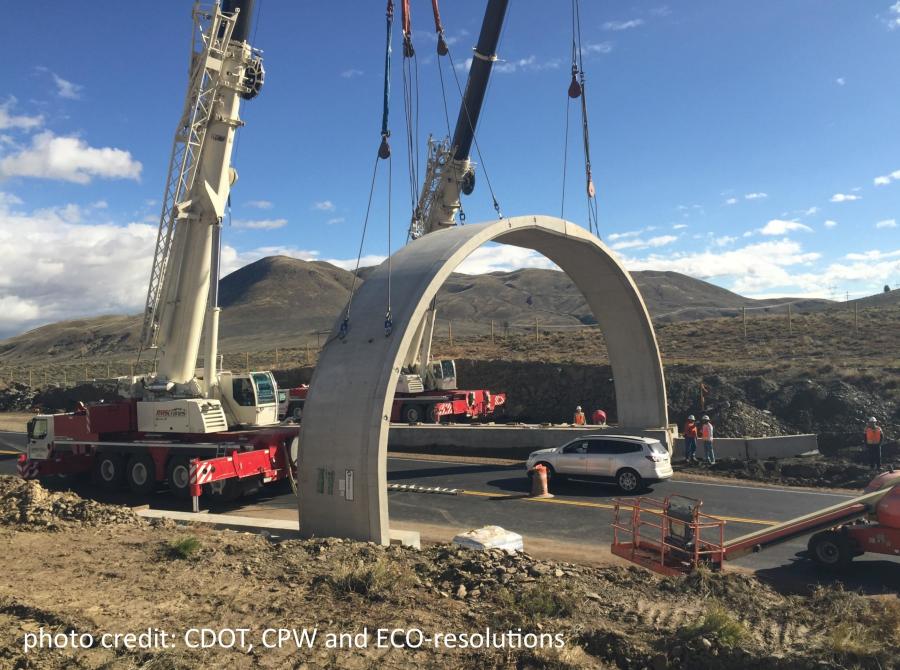 One evening in early April, Deb, a Southwest Colorado resident, was traveling on U.S. Highway 160 near Mancos when she hit a deer.

“Well, that deer actually hit me,” Deb explained. “I did not have a moment to react. This doe was running full-force and ran right into my front end. I pulled over only to find my hood bent, fender damaged and headlight gone. I realize this could have been a life-threatening situation, and I'm certain this will result in a couple thousand dollars in damage.”

Deb, who also is a CDOT employee, is well aware of the education efforts of the “Wildlife on the Move” program, which cautions motorists statewide to be attentive to wild animals crossing the roads.

“Be aware, drive with caution and slow down — especially at dusk and dawn, when the majority of animals are active and wildlife vehicle collisions (WVCs) occur — just like Deb's crash,” said Colorado State Patrol (CSP) Captain Adrian Driscoll.

Driscoll also offered this advice: “The best practice for drivers is to be diligent and super observant. If you see one deer or elk, expect others. Scan the sides of the road for signs of movement and watch for those shining eyes of animals that reflect car headlights at night.”

If a wildlife collision does occur, “brake, look and steer.”

• Brake: Slow down and concentrate on retaining control of the vehicle.

• Look: Be aware of your surroundings, especially other vehicles.

• Steer: Move your vehicle to a safe position off the road.

To help prevent these types of crashes with wildlife, CDOT partners with entities such as Colorado Parks and Wildlife (CPW) to design and construct mitigation features along state roadways, identifying locations where these mitigation structures will be the most beneficial.

About the CO 9 Wildlife Crossing Project

CDOT and CPW are partnering on a five-year monitoring study along CO 9 that is being conducted by ECO-resolutions. The first year's progress report (Phase 1 only, winter 2015-2016) documented a 90 percent reduction in wildlife-vehicle collisions (WVCs) within the completed project area. In addition, over 7,000 mule deer movements were reported through or over the crossing structures. Other animals that use the crossing structures include elk, black bear, moose, coyotes, pronghorn and bobcats.

“The successful results from this project have exceeded our expectations. It is clear the animals are adapting to the structures and are able to stay connected to important habitats,” said Michelle Cowardin, CPW wildlife biologist. “These innovative projects, like CO 9 and mitigation projects in other areas of the Colorado, improve highway safety for people and wildlife.”

Other Wildlife Projects in Colorado

In the southwest corner of the state, two large roadway projects incorporated a number of wildlife mitigation features. Large arch underpasses were installed with wildlife fencing and escape ramps to allow wildlife safe movement under the highway on U.S. 550, near the community of Colona, and along U.S. 160, between Durango and Bayfield.

CDOT plans to install additional wildlife mitigation features starting in 2017 along U.S. 285 north of Nathrop in the Arkansas River Valley.