The expansion comes at a good time with the ongoing development of energy resources in the Ohio region. 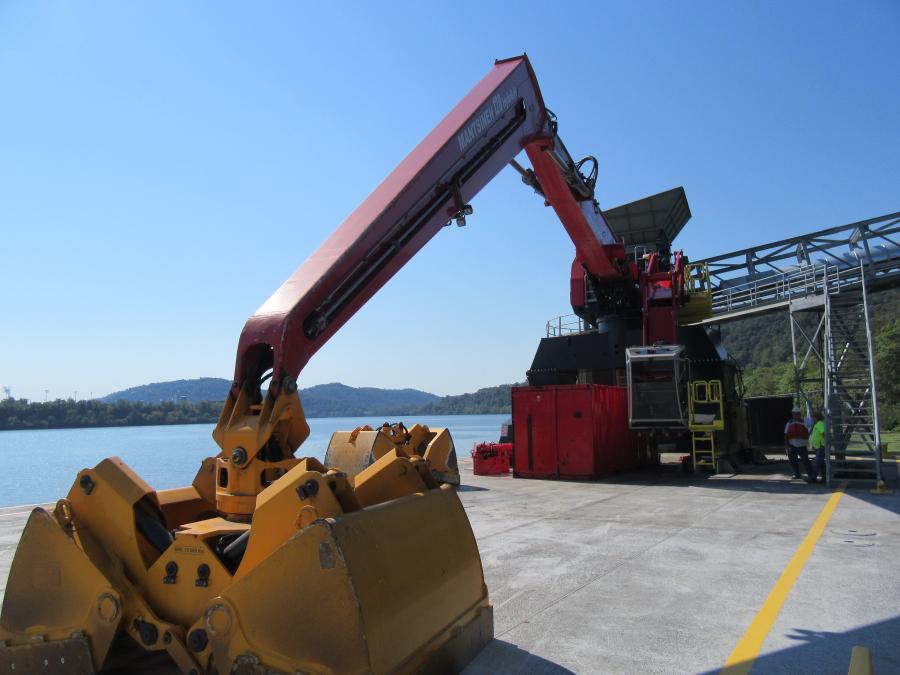 The Mantsinen 120 HybriLift material handler equipped with a 4 cu. yd. bucket was the main attraction at the ribbon-cutting ceremony.

Ohio's Columbiana County Port Authority held a ribbon-cutting ceremony Sept. 23 at its Wellsville Intermodal Facility to commemorate the addition of a Mantsinen 120 HybriLift material handler paired with a 48-in. (121 cm) Imperial Technology conveyor system. Speaking at the event, Penny Traina, Columbiana Port Authority CEO and executive director, explained that the $5.1 million investment would lead to significant increases in efficiency and productivity at the facility. She went on to discuss the Port Authority's goal in promoting economic development in Columbiana County as a major distribution hub in cargo movement on the Ohio River.

The expansion comes at a good time with the ongoing development of energy resources in the region, including the Shell cracker plant in Monaca, Pa., and another cracker plant pending in Belmont County, Ohio. Cracker plants convert ethane, a component of natural gas generated by the region's hydraulic fracturing operations, to produce substances used to make chemicals and plastic.

Larry Heck, owner and president of Pier 48 Stevedoring LLC, presided over a demonstration of the material handler. Powered by electricity, those in attendance were impressed with the Mantsinen's smooth, quiet operation and safety features, including ground level cab entry and high cab visibility of the machine.

Immediately following the ribbon cutting ceremony and demonstration, those in attendance were invited to a luncheon provided by Ohio CAT at the site.

According to Stadvec, the hydraulic technology employed by the Mantsinen 120 HybriLift material handler offers clear advantages for bulk material operations. Benefits versus traditional cable cranes include intuitive joystick controls for all machine functions, automatic overload protection that prevent operation outside of machine capacities, hydraulic speed and precision in placement of loads unaffected by wind conditions.

Manufactured in Finland and equipped with a 4-cu. yd. (3 cu m), 9-ton (8 t) bucket, the Mantsinen is capable of handling 800 tons (725 t) per hour, and depending on material, can unload a barge in 3 to 5 hours. According to the manufacturer, the HybriLift energy storage and recovery system can improve energy efficiency by up to 35 percent. The material handler's features include a hydraulic cab elevator with ground level entry that raises the operator's eye level to 36 ft. (11 m) for complete visibility of loading operations.