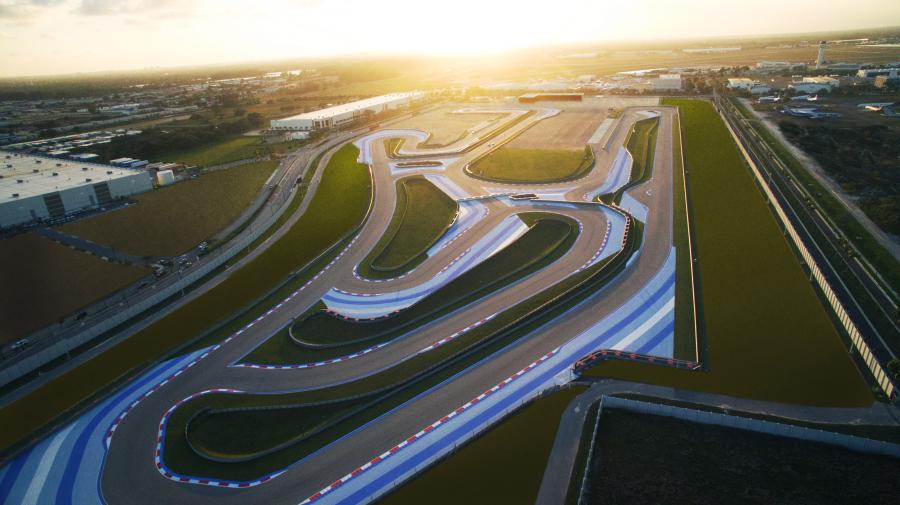 The Concours Club speedway is more than 2 mi. of road course built with multiple configurations. The course is not banked, so amateur drivers can test their skills and their vehicles.

For many people, from teenagers to senior citizens, the idea of tromping the accelerator of a hot car and going as fast as possible is invigorating.

Perhaps just going fast is not enough. Showing off your skills might be even better.

The best of both worlds is on display at the new speedway at The Concours Club in Miami.

Of course, there's a catch. You must be a member to use the track. Founding Memberships sold out at $350,000 each. The Club is accepting a limited number of membership applications. The initiation fee is $150,000 with $35,000 in annual dues.

People who can afford the membership also can probably afford a high-performance car to drive at the track. High-performance driving requires a quality track; that's why The Concours Club called on Advanced Materials Services (AMS) and Ajax Paving to design and build the track. Brian Prowell, principal engineer of AMS has supervised the construction of more than 30 racetracks, and Ajax Paving in Troy, Mich., has extensive experience in building speedways used by NASCAR. 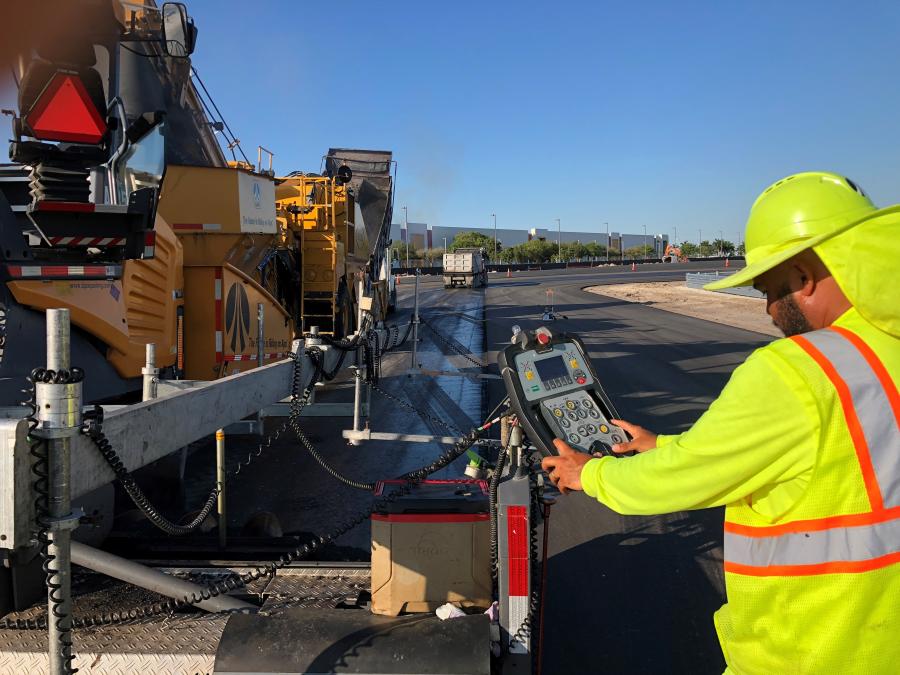 Precision paving was required when the track was built during February and March 2019. The costs of the completed project will be approximately $220 million.

The Club called for a 2-plus mi. road course track to be built with multiple configurations. The speedway is similar to the course in Watkins Glen, N.Y., which Ajax also paved. The Concours Club course is not banked, so amateur drivers can test their skills and their vehicles, plus have a lot of fun in the process.

Building a speedway has its own unique set of challenges that make it different from construction jobs on an interstate or state highway.

"The quality on this job was one of the best of any project we've been a part of," said Prowell. "While a normal freeway job must be concerned with sustaining the weight of trucks [downward forces], speedway paving has to be concerned with the shear [lateral forces] and stickiness of the racecar tires. The high speeds, wide tires and sharp turns demand a hard aggregate to maintain the pavement's surface characteristics over time."

The smoothness of the track is vitally important. Where a slight bump on the freeway doesn't matter to a semi or normal passenger car, the same bump can create problems for an expensive car hugging the road at high speed.

"Smoothness of the track and uniformity of friction were critically important in the paving process," said Prowell. "That's one reason why we required quality granite for the coarse aggregate. Its hardness means that it does not lose friction over time as other aggregates might."

Prowell noted that Ajax Paving used a Vogele paver with a tamping bar screed to meet the high standards required for the job.

"This paver pre-compacted the asphalt mix and helped the team build a smoother road and meet the high- density requirements," said Prowell.

Ajax Paving trucked its equipment from the Detroit area, a trip of nearly 1,400 mi., because of the team's confidence that the machines could do the job. The paving team also brought along a full-time mechanic in case of breakdowns. 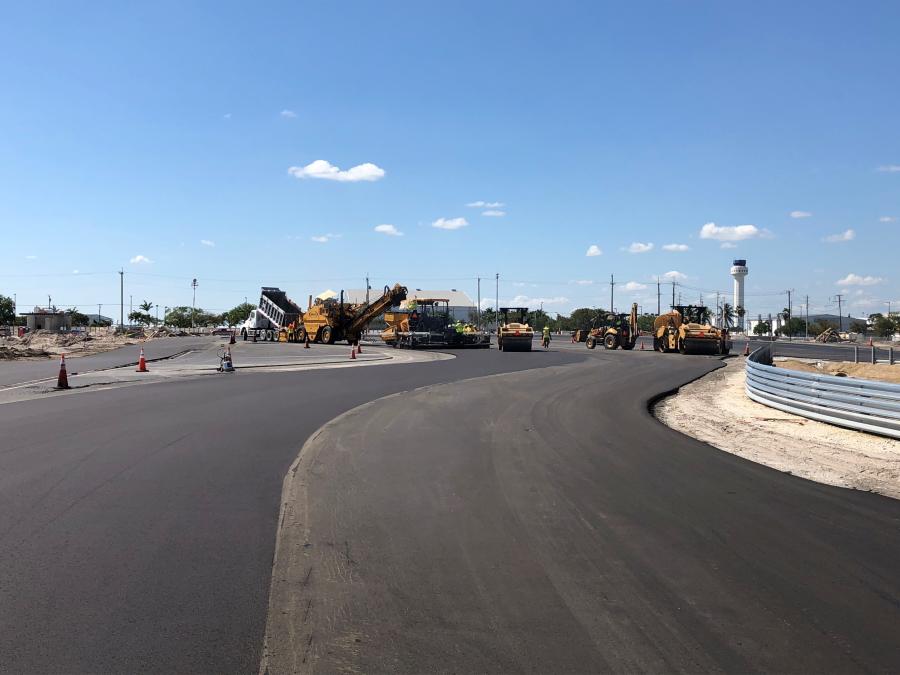 The tracks were constructed adjacent to the Miami-Opa Locka Executive Airport meaning noise restrictions were not a problem and permitting was greatly simplified.

"Because smoothness was so important, we used a Weiler material transfer vehicle," said Tim Hay, project manager of Ajax. "This guaranteed a steady flow of material into the paver and also meant that we would not have any trucks bumping the paver. That helps prevent segregation in the mix."

Ajax tried to keep delays minimized for the paver for days that started at 6 a.m. and ran until 5 p.m. The paving team produced a 20-ft.-wide new road. However, the speedway required a 40-ft.-wide road, almost double the width of two lanes of a traditional freeway. That meant a joint was created where the two new lanes met. Again, smoothness between the two "lanes" was crucial.

"We cut into the joint vertically between the two lanes and applied sealer to bind the two lanes together tightly," said Hay. "A poor joint can allow water to seep into the road and degrade the road over time as well as affect the smoothness."

The circuit was new construction and required approximately 30,000 tons of asphalt. The nearest airport runway was about one-half mi. away, which enabled the Ajax team to construct some unusual safety features.

"We built some large run-off areas so that if a driver lost control on a turn, he could slow down safely," said Hay.

The Ajax paving team constructed the road in three stages — the first, a 2-in. base course, the second a 1.5-in. leveling course, the third, a 1.5-in. surface course. The base asphalt mix was the equivalent of a standard Superpave mix used in interstate work. The leveling and surface mixes were a specialty racetrack mix, somewhat similar to an airport mix, but with more polymer and adjusted to increase in-place density.

Ajax took another unusual step in grinding down any bumps in the leveling course.

"We believed that would help us to make the final course as smooth as possible," said Hay. "In the end, we were able to meet all the smoothness requirements."

Another challenge for the designers of the speedway was contending with the intense heat generated by the tires' friction with the road. 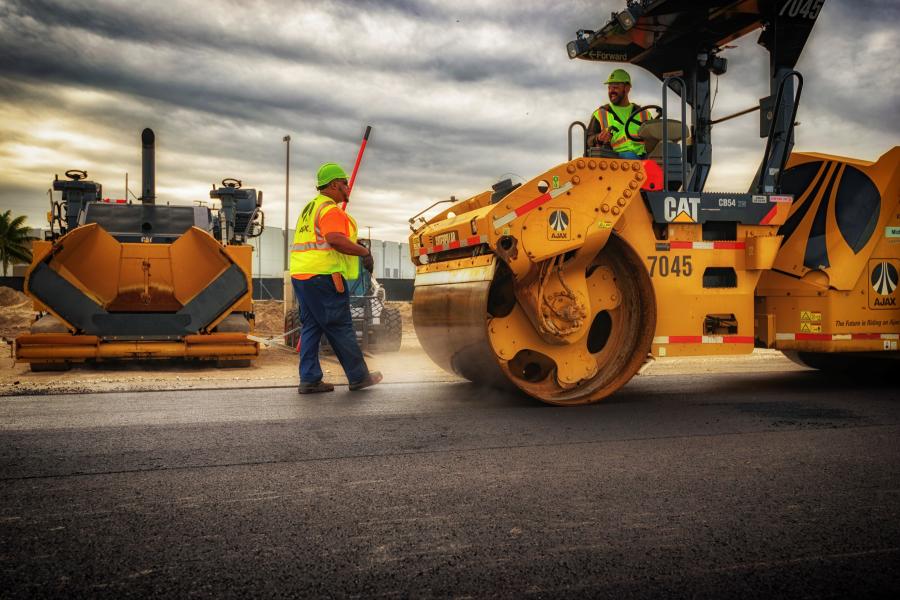 "We used a mix that had a high polymer liquid content so the road could handle the heat," said Hay.

With a normal mix, workers can rake loose asphalt into place to fix any imperfections. "That mix is hard to work with because it is so stiff."

For some of the tight turns, all the cars will be braking heavily, then making sharp turns at the same spot. The stiffer mix should prevent ruts from forming and the road deteriorating over time, according to Ajax.

The Ajax team put the finishing touches on the road by running one set of rollers close behind the paver with the finish rollers further back. The team's experience with speedways and outstanding performance from the equipment enabled them to meet all requirements.

"Our guys were proud of this project," said Hay. "It was great to know that we completed a job that not many paving teams are capable of doing."

The paving team relied on the steady production of asphalt from General Asphalt of Miami. The plant that produced the mix was just 10 mi. from the construction site.

"The mix required 20 to 25 percent granite, which is not usually required by most Florida operations, so we needed to bring it in from Georgia," said Albert Lopez of General Asphalt. "We also had to get the polymer required and have it available. We were able to meet the requirements for air voids and volumetric targets as required.

"It was fun to be involved in a project like this," added Lopez. "The amount of testing done was at least five times what is normally done. The experts challenged us, and we were able to deliver a mix to their exacting standards." CEG